In the first days of post-election protests in Belarus, thousands of people took to the streets of Minsk – and became victims of the brutality of the security forces. 19-year-old Maria Zaitseva became deaf from an exploding grenade on August 9. Alexander Taraikovsky was shot by forces near the Pushkinskaya metro station on August 10. Gennady Shutov was seriously wounded in the head in Brest on August 11 and died in hospital a week later, on August 19. On the night of August 11, a rubber bullet hit the back of the driver of bus No. 163 in Minsk. There are many such cases, and the worst thing is that the damage to peaceful Belarusians was inflicted by weapons produced in European countries.

The embargo on arms supplies to Belarus appeared in 2011. 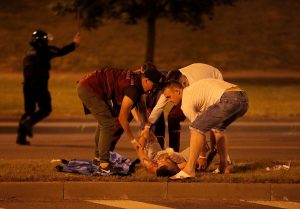 This decision was made by the European Union. This happened after prolonged human rights violations. The bans also affected the supply of protective equipment, as well as all items that could be used in repression. Since then, only sporting weapons have been allowed to be supplied to Belarus, and the embargo has been extended every year. 2020 was no exception.

Nevertheless, the Belarusian special forces have foreign weapons. In 2017, a report from a professional tournament of Belarus’ special units: the Alfa group of the KGB, the SOBR, the Almaz, and the army forces was released. Samples of weapons with which the military worked appeared in the video. So, the L96 A1 AW sniper rifle was created by the British weapons manufacturer Accuracy International. With its help, you can hit any target from the first shot, even with a dirty barrel. The rifle works even in severe frost. It was used during the Iraq War. Belarus is not on the list of countries using rifles of this model. But there is Russia there – it is quite possible that foreign weapons of this particular type go to Belarus from there.

Another foreign sample is the Benelli M4 Super 90 smooth-bore semi-automatic magazine self-loading shotgun, made in Italy. Based on the tournament video, it is used by Group A combatants. The shotgun is highly accurate and is used in many countries around the world. This model was used during the Iraq War, the conflicts in Afghanistan and the civil war in Syria. The gun was also used during the dispersal of protests after the 2020 elections in Minsk. Its rubber bullets, when fired from 10 meters, can cause fatal injuries. 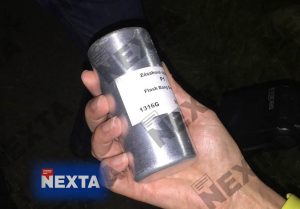 In the first days of the protests after the elections in Belarus, photos of flash-noise grenades, which were used against the civilian population, appeared on the Internet. It turned out that the grenades were produced in the Czech Republic at the Zeveta Ammunition plant in 2012, that is, after the imposition of the arms embargo. Where they could have come from in our country, if there are sanctions against Belarus, is unclear. The company representatives stated: Zeveta Ammunition has never exported military equipment to Belarus. Representative of the Czech Ministry of Foreign Affairs Zuzana Shtikhova clarified that third countries could supply grenades to Belarus:

– Either we are talking about illegal export, or about supplies that were carried out before the embargo was introduced in 2011. The Czech Republic, like all EU countries, fulfills the conditions of the embargo, which has been in effect for a decade.

Meanwhile, Belarusian bloggers living in the Czech Republic saw a truck with a license plate of our country on the territory of the enterprise. During the investigation carried out by Radio Liberty, it was found out that the Belarusian truck stopped by the neighbouring Moravia Cans enterprise, which produces components for building materials, plastics, varnishes, paints, and metal foil. The company confirmed that a Belarusian truck did indeed visit them. It is not known what kind of cargo was loaded into it, but the company said that it was intended for a Russian client.

Stun grenades, as in the photo from Minsk in the Czech Republic, are sold in special stores – they can be bought upon reaching the age of 21 and after undergoing special training. The cost of a grenade is 30 euros. According to the manufacturers, the use of these grenades is not harmful to health. Although in the Czech Republic itself, grenades were used to disperse the participants of the CzechTek electronic music festival in 2005, as a result of which there were several seriously injured people.

On August 28, 2020, Greenpeace activists from Germany found out that the Belarusian special forces are armed with German weapons. “Weapons include MP5 submachine guns from weapons manufacturer Heckler & Koch and P226 pistols from Sig Sauer, as evidenced by the video and photos assessed by Greenpeace. Police, and especially special units, also use VW patrol cars and military vehicles,” the publication says. Let us clarify that the MP5 submachine gun is characterized by high single-fire accuracy due to firing from a closed bolt, it has various types of sights, a silencer and a tactical flashlight. It is used by the Almaz group, the Alpha group, SOBR, OSAM of the Border Committee, and the President’s Security Service.

Greenpeace experts assessed photos from the shootings of Belarus’ special forces: the Alfa group and the Almaz group. “Official documents show that police units are using P226 Sig-Sauer pistols,” the experts emphasize. The named pistol is produced by the Swiss-German company Sig-Sauer. The weapon is considered one of the highest quality and most reliable in the world. Its magazine holds 12 to 20 rounds. It is assumed that the P226 Sig-Sauer were brought to Belarus in the 2000s, when the arms embargo had not yet been introduced. Samples survived in Belarus until the 2020 protests. On the march on October 18, security officials were seen with P226 Sig-Sauer pistols in a holster.

Greenpeace experts clarify: the route of German weapons entering Belarus is unknown. Official records of arms exports by the federal government do not even allow the timing of shipments to be ascertained – before or after the embargo. “There are still big doubts about the legitimacy of arms exports. Therefore, we call on the German government to explain how the weapons got to Belarus. If Heiko Maas gives recommendations on the situation in Belarus at a meeting of foreign ministers, he should also talk about a strict ban on arms exports. This is the only way to prevent weapons from entering areas of war and crisis situations along legal or illegal routes,” experts say. 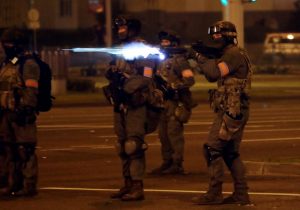 In March 2021, the iSANS expert network and a team of former security officials published a report on the use of weapons against peaceful demonstrators during the 2020 protests in Belarus. According to the information contained in it, from August 9 to 22, 2020, in Minsk alone, more than 1,1 thousand people sought medical help with various bodily injuries. Dozens of protesters suffered from mine blast and gunshot wounds. The experts did a tremendous job comparing the weapons of the security forces with the injuries they received. As a result, it was possible to establish exactly which pistols, machine guns, grenades were used to inflict injury.

Most of the weapons are produced in Russia, which is not surprising. Many agreements on military cooperation have long been signed between Belarus and Russia, there is even a Plan of Joint Measures of the Ministries of Defence of the Republic of Belarus and the Russian Federation to ensure the security of the Union State for 2019-2021 and a Plan of Cooperation between the Ministry of Defence of the Republic of Belarus and the Ministry of Defence of the Russian Federation. For many years, joint exercises and training courses have been held for the exchange of Belarusian and Russian military personnel. In 2020, according to the press service of the Belarusian Ministry of Defence,” special attention was paid to equipping the air forces and air defence forces with new and modernized models of weapons and military equipment”. Therefore, Belarus has every reason to use Kalashnikov assault rifles, Osa pistols, Russian hand grenades, Yarygin pistols, IZH-81 pump-action guns and others. 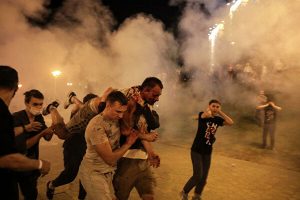 The list of weapons contains samples of Italian, German, Austrian production, which were discussed above. But there is also a copy of the production of the USA – the Remington 870 pump-action shotgun. On September 6, 2020, Remington was noticed by the security forces on Freedom Square. One of the soldiers, equipped with an American shotgun, stood in a chain in the covered area.

Another piece of weaponry seen by Belarusian security officials at protests is a Glock 17 air pistol. The weapon was developed by the Austrian company Glock. Its technical characteristics allow up to 350 thousand shots to be fired, which is much more than other pistols. The gun can be used in water environment – it does not corrode. Bringing the weapon into the firing position does not require switching any fuse. Glock 17 is listed in the Guinness Book of Records as the pistol that has undergone the most severe tests and retained its combat effectiveness. TUT.BY spoke about the use of Glock 17 – the weapon was on the books of the Minsk riot police. 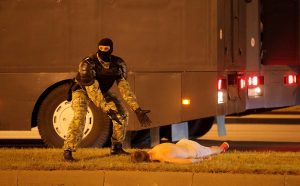 How did the weapons from Europe end up in Belarus? Two options are possible here: the models could remain from the supplies of the 2000s, when the embargo had not yet been introduced, or, as Zuzana Shtikhova said, supplies go through third countries, that is, those that are friendly to the Lukashenko regime. According to the Ministry of Defence, Belarus cooperates in the military sphere with CIS and CSTO countries. In 2017, Belarus and Uzbekistan signed a memorandum on cooperation between the offices of security councils. In 2020, Security Council Secretary of State Andrei Ravkov and Azerbaijani Ambassador Latif Gandilov discussed strengthening the countries’ security cooperation. Cooperation is also underway with other countries, including Turkey, China, Vietnam, the UAE and Qatar. These states also use Western weapons. 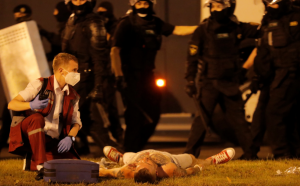 For example, the Benelli M4 Super 90 was used during the military conflicts in Iraq and Libya. And in 2016, Deputy Foreign Minister of Belarus Valentin Rybakov spoke about cooperation with Iraq in the field of security. The MP5 submachine gun from the Heckler & Koch factory is produced in Turkey: the local MKEK company has the corresponding license. And Turkey and Belarus also cooperate in the security and military spheres, as we wrote about here, however, both sides avoid talking publicly about this cooperation. Consignments of weapons from European countries are supplied to China and Vietnam, which maintain contact with the regime after the 2020 elections.

We have already talked about how Belarusian children are taught to use weapons from an early age. According to the Law of the Republic of Belarus “On Internal Affairs Bodies”, the use of special means, including weapons, chemicals, service dogs, is unacceptable in relation to civilians, pregnant women, disabled people, minors. ICCI “Our House” believes that the European Union should not close its eyes to the fact that peaceful Belarusians are mutilated and killed with weapons produced by its military enterprises, especially if these actions are illegal and are aimed solely at maintaining the power of one person.