It’s not sufficient to call Putin “the aggressor”, it’s necessary to deprive him of Belarusian resources that he considers to be his own and wants to use against Ukraine. The most important on the list are human resources. If they are absent, both the regime of Putin and the regime of Lukashenka will be deprived of energy and the inflow of the “fresh blood” for the aggression. Even the most modern military equipment and ammunition cannot be efficient in conducting a war if there are no soldiers to operate it.

To ensure that Ukraine wins as soon as possible, in March, 2022, a few days after the war had begun, the Belarusian human rights organization Our House started the campaign aiming to block the Belarusian army. The campaign is called “NO Means NO” (read campaign news here). Its objective is to help young Belarusian conscientious objectors and deserters avoid service in the Belarusian army, and thus, avoid being sent to the war with Ukraine.

Our aim is to steal the army from Lukashenka and to block his every attempt to send the Belarusian army to help Putin in Ukraine.

At the initial stage, the main task of the campaign is to break down the forced mobilization. We help young Belarusian conscientious objectors and deserters from the army to leave Belarus. If a young Belarusian who has decided not to join the army stays in Belarus, it’s a 100% guarantee he will get imprisoned for the term of 7 to 10 years. As a human rights organization who knows just too well the situation in Belarusian prisons, we cannot urge young Belarusian men go to prison instead of the army, as they will be beaten, tortured and even raped, some of them killed there.

The Ministry of Defense of Belarus made an attempt to call to arms 43 thousand young men in February, 2022. As of today, about 20 thousand young conscientious objectors have left Belarus so that they would not be forcefully mobilized to go to the war against Ukraine.

At this moment, the regime of Lukashenka has managed to obtain only 6 thousand new soldiers, partially thanks to the efforts of Our House. That number is not enough to start fighting with Ukraine, to send an army there. In the result of the disruption of mobilization in the Belarusian army, the Major General Aleksandr Shkirenko was dismissed on July 12, 2022 from his position of the head of the main organizational and mobilization department and the deputy head of the General Staff of the Armed Forces.  He was in charge of the conscription into the army. 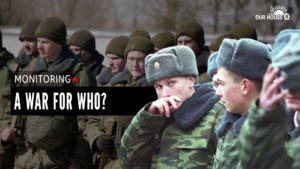 A new wave of conscription is to be held in August-November, 2022. On 4 July 2022, Aliaksandr Lukashenka signed the Ordinance № 227 «About military discharge and call-up for fixed-term military service, service in the reserves». However, we have a scheme and a vision how to help Belarusian conscientious objectors and deserters in a systematic way (not only help and work on individual cases). Our task is to block the army as a whole, so that Belarusians don’t participate in the war, and a strategy how to do it must be worked out.  Today we have developed such a strategy and are implementing it.

At this moment about 10 of the largest companies in Poland have agreed to change their priorities and are ready to hire Belarusian conscientious objectors and Belarusian deserters on a priority basis with accommodation from the first day of work, when a humanitarian corridor to Poland is opened for them. Our task is to attain a humanitarian corridor for Belarusian conscientious objectors and deserters to Poland.

At the beginning we had the idea that conscientious objectors would go to Ukraine and surrender en masse.  After communicating and discussing that idea with the Ukrainian military, it became clear it was unworkable because 99% of conscientious objectors and Belarusian deserters would get killed before they were taken prisoners, i.e., they had little chance of surviving. The question also arose that if any of them were taken prisoners, how and where we as Our House could transfer those people.  Lithuanian politicians did not like the idea to take Belarusian POWs to Lithuania.  As we understand, neither Polish, German, Latvian, Estonian or any other politicians would not like such an idea. Therefore, we had to reject it.

So, we encouraged young Belarusians to flee, and so far about 20,000 young conscientious objectors have fled to Georgia and Turkey and are stuck there because they cannot get into the EU.  It is very difficult for them to get visas. So, after a while we decided to fight for the opening of a humanitarian corridor to Poland for young conscientious objectors and deserters.

Today that idea is on the march. More and more young Belarusians want to say “NO” to military service and to participation in the war against Ukraine.

Our task is to help them, preventing thus the Belarusian army from invading Ukraine.

This is our feasible help we can provide to Ukraine.

Please help us to return Elvira home and support the families of other female activists in Belarus who suffer for their fight for human rights, justice, and democracy in the country. On the...