In the beginning of July 2018 International Centre for Civil Initiatives “Our House” sent out a paper where suggested to slow down the process of signing the Agreement on the Priorities of the Partnership between Belarus and the European Union. This was suggested in order to give sufficient time to the participants of this process (as well as civil society of Belarus) to carefully consider, and possibly solve, several concerns raised by recent developments in the Belarus’s national and international politics.

This paper received a number of interesting comments, thought provoking questions, and both critical and supportive suggestions. One of the issues receiving the closest review was a topic of intensified interactions between the Lukashenko family and Ramzan Kadyrov, the Head of the Chechen Republic. Some of our readers worried whether it might be a fake-news, some others shared further evidence of these interactions. It became clear that a follow-up is needed to clarify and develop certain points further.

The (in)visible intensification of the relations between the Lukashenko family and Ramzan Kadyrov started about a year ago. Please see below a short chronicle of these relations as it was presented in the media (including the state Chechen media) and social media. We also provide the links to these materials online for further references. If any of these links do not work, please contact us and we shall provide downloaded copies of these materials.

On September 25, 2017 Ramzan Kadyrov arrived to Minsk at Alexander Lukashenko’s personal invitation. The visit happened to be immediately after the Russian-Belarusian military exercises had taken place in Belarus on September 14 – 20, 2017.

Aleksandr Lukashenko himself explained the visit by saying that he desired to develop cooperation with the Chechen Republic, especially in the sphere of “high technologies”. This is not impossible but quite improbable because Chechnya never positioned itself as a “high-tech territory”, especially under Ramzan Kadyrov. Alexander Lukashenko also proposed to develop automotive industry in Chechnya, which was equally odd given that Belarus was not a country with a reputation of an automaker.

A video report on the meeting between Ramzan Kadyrov and Alexander Lukashenko can be accessed at mir24.tv/news/16269238/svershilos-lukashenko-vpervye-prinyal-kadyrova-v-minske

Kadyrov also met Viktor Lukashenko, with whom he purportedly discussed the issues of Belarus’ national security”. Without trying to be sarcastic, we are genuinely interested in the question of whose exactly security in Belarus was discussed. The reason this question appears is that Viktor Lukashenko is an assistant to the president; he is also a member of the Security Council. This is the same Council that was formerly led by Viktor Sheiman, now accused of abductions and extrajudicial executions of the leaders of the Belarusian opposition in the 1990s. There are many other people in the Council that are accused of abductions and extrajudicial executions of the opposition and journalists in the 90s. Apart from Sheiman, the Council includes the former KGB heads and other enforces who led the bloodiest repressions in Belarus, including the crackdown on the peaceful demonstration on December 19, 2010.

In the photo are Viktor Lukashenko and Ramzan Kadyrov in Minsk after the discussion on “Belarus’ national security”. The photo was taken on September 29, 2017. 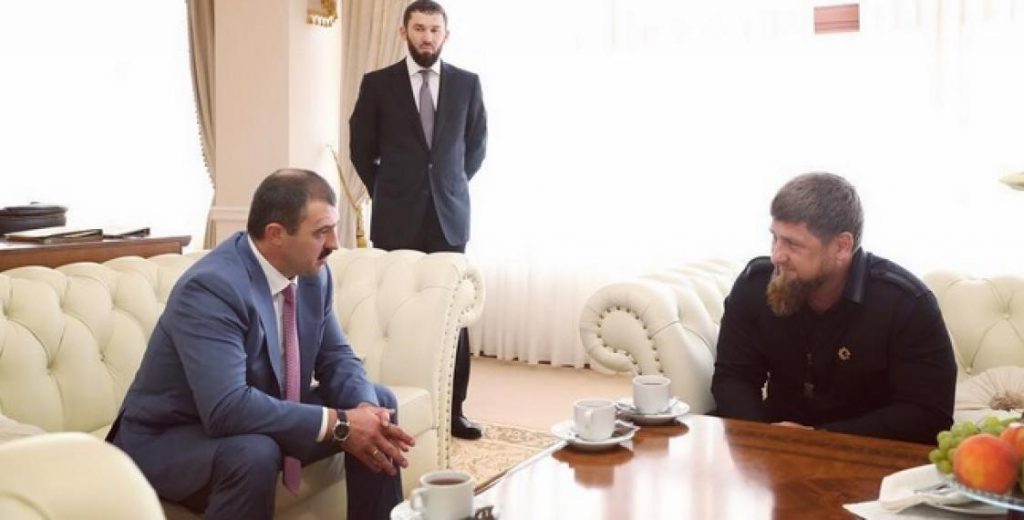 On April 24, 2018, Alexander Lukashenko, in his Speech addressed to the People and Parliament, unexpectedly confessed to organizing extrajudicial executions and threatened to do the same in the future: “Or should I take brutal measures, as in the first years of my rule as a president, when people were killed on the Moscow-Berlin route? When I sent a handful of reliable people with machine guns, who shot half of the people there and cleaned it up in a month?” In fact, this is a direct threat to restore the “Death Squad” to murder unwanted people on the orders of Lukashenko.

This may appear unrelated to the topic of this paper, but we would like to add it to our chronicles as it sheds some light on the context in which our analysis develops.

The video of this address is publicly available: naviny.by/new/20180424/1524584073-posylal-lyudey-s-avtomatami-kotorye-perestrelyali-tam-polovinu-lukashenko

On 24-25 of May,  2018 the deputy chairperson of the Liberal Democratic Party of Belarus (LDPB), a Belarusian ultra-right party (which signed an agreement on cooperation with a number of ultra-right parties in Europe, like the National Front of France, the Austrian Freedom Party, etc.), unexpectedly maid visit to Chechnya. Again, quite an odd reason of this visit was announced to the public. Apparently, the two sides met to discuss the “glorious heroic past of the two friendly peoples.” But the Belarusian people have not had any “heroic past” in common with the Chechen people, except for participation of the leadership of the Communist parties in the respective countries in the Stalinist repressions in the 1930s within the USSR.

As far as we concerned, prior to this particular visit the common past had never since the very emergence of independent Belarus been discussed, which makes one puzzle over the genuine purpose of the visit of Anatolij Khishchenko, a LDPB representative and a member of the National Assembly. Another interesting question is: who exactly sent LDPB to Grozny.

How do we know about this visit and its agenda? This is from social media newsfeeds of Oleg Gaidukevich, the son of the party leader, where he shared information on the visit.

On June 23, 2018 during the meeting of Alexander Lukashenko with civil servants the former told to his public officials: “You can march or you can pick up the pistols and put things in order here”[1]. This is a direct appeal to officials and security forces to shoot peaceful citizens who disagree with the state’s policy and, hence, mess up with the “order”. .”[2]  “Putting things in order” is an analogy with Stalin’s “purges,” that is, mass executions of civilians by NKVD/KGB structures in the middle of the 20th century. Effectively, it is a permission to physically eliminate dissenting civilians and members of the opposition being given to officials and law enforcement agencies.

On June 25-27, 2018 Viktor Lukashenko flew to Chechnya to have a meeting with Ramzan Kadyrov. This is something the media in Chechnya reported on profoundly and was completely overlooked by the media in Belarus. 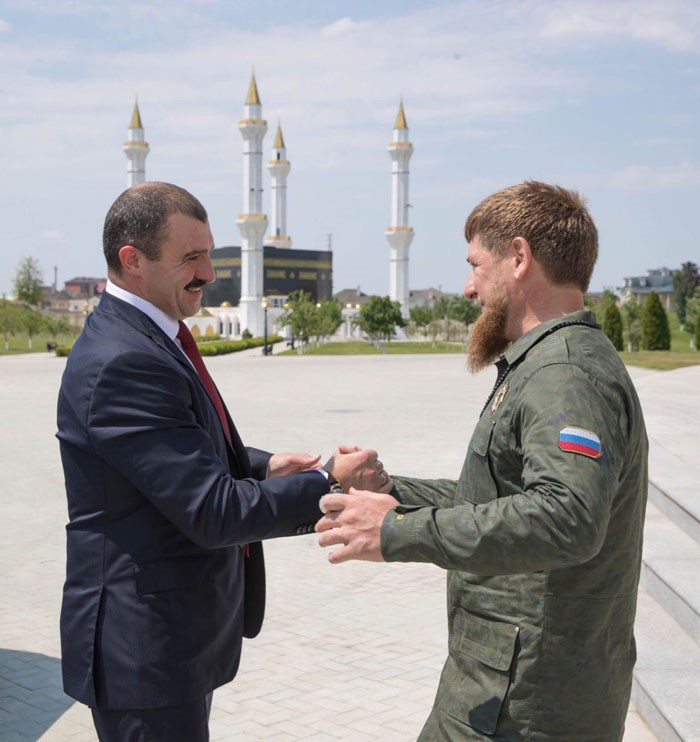 The official purpose of the visit in media was to see Lake Kezenoy-am and have a barbecue with Ramzan Kadyrov.[3] Really? One does not need to be a politics expert to understand that the provided official reason was not only sufficient but far from being true.

Viktor Lukashenko was modestly described by Chechen media as “the Assistant on National Security to the President”, however in reality he is also the Assistant on National Security to the President and his oldest son and a member of the Security Council, as mentioned before. That is, Ramzan Kadyrov had met not just with a random person and not with a person with a simple position, but with a person who is a trusted personally by Lukashenko on the issues of national security.  Considering all this, the idea that Viktor Lukashenko wants to eat shashlik while enjoying the beautiful view of the lake does not sound just funny, it sounds very stupid.

Interestingly, that in between enjoying the nature and the barbecue Viktor Lukashenko visited the Russian University of Spetsnaz, a private university in Chechnya, devoted to the training of Special Forces. There Lukashenko Jr. was observing the demonstration of the art of special operations. Apparently, between the lake and the barbecue, he accidentally dropped in on very narrow specialists. This was shared with pride by Ramzan Kadyrov on his twitter. As Kadyrov also stated, Viktor Lukashenko not only praised the quality of the education but that it could be used for training of the Belarusian Special Forces. As Kadyrov’s tweet went: “The fighters of the instructors group and the special forces’ personnel demonstrated the skills of conducting special operations… Viktor Alexandrovich, who is well acquainted with the military affairs, noted that the university’s potential was very high and can be used to improve the skills of Belarusian Special Forces”. Kadyrov also boasted that there were the best conditions in the world in the university for training the units of special purpose.

The video of Viktar Lukashenka visiting Kadyrov’s University of Spetsnaz is on YouTube: https://www.youtube.com/watch?v=8LlPxP69Bmo

Moreover, according to Human Constanta report in 2017, there is information on secret presence of Chechen security agents (Kadyrovtsy) in Brest.[4] It was reported that cechen security officials have repeatedly visited refugees at a railway station in Brest questioning about different persons mostly seen as being in opposition to the current government in the Chechen republic. Due to this secret presence and the methods used, including the ones violating human rights and international cooperation norms, Human Constanta experts concluded that Belarus cannot be unequivocally deemed as a safe country for Chechen refugees.[5]

The concern is, again, if official Belarus does favours to Chechen authority supporting their undemocratic actions and encouraging human rights violations by them, what (illegal) favours does Belarus expect in return?

On the 16th of August 2018 Alexander Lukashenko awarded Ramzan Kadyrov with the Order of Friendship of Peoples for “significant personal contribution into the strengthening of the friendly relations and comprehensive cooperation”. What was the contribution was never explained. None of the European politician ever received such an honour. Yet among the other awarded individuals are: Vladimir Putin; former Mayor of Moscow, Yury Luzhkov; Ilham Aliyev, President of Azerbaijan in office since 2003;  Hugo Chavez, President of Venezuela from 1999 to 2013; Sergei Lebedev, Director of Russia’s Foreign Intelligence Service from 2000 to 2007; Patriarchs of Moscow and all Rus’ and Primates of the Russian Orthodox Church Patriarch Alexy II and Cyril; Nikolay Bordyuzha ,  Secretary General of the Collective Security Treaty Organization; Igor Makarov, a Russian businessman and President of ARETI (ITERA) International Group.

On the 24th of August 2018 Mikhail Babich has been appointed as Russian Ambassador to Belarus and a plenipotentiary representative of President of Russia on Belarus.

Interestingly, that of all the candidates Russia appointed to this position a diplomat who has experience of work in Chechnya: from November 2002 to February 2003 he was the Chairman of the Government of the Chechen Republic.

Recently intensified contacts between Lukashenko’s family and Ramzan Kadyrov on “Belarusian national security,” which Alexander Lukashenko understands only as a matter of retaining and preserving his personal power, plus Lukashenko’s public allusions to extrajudicial executions cause concern and worries. Note that these cooperation occurs not between different states, but between the state of Belarus and a small, albeit with a significant autonomy, but still part of Russia.

We urge all of you to follow the developments very closely, and, if possible, to warn Alexander Lukashenko against the unacceptability of using Chechen fighters and the restoration of “death squads” in Belarus. 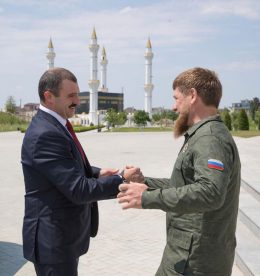