The description of an individual case on rights violations and political persecution for professional (journalistic) activity against Anna Krasulina, the editor of the United Civil Party (UCP) website and UCP press secretary

Chapter 1. The description of the case and the chronicle of the events related to the case.

Chapter 2. The conclusions of Our House experts on the politically motivated banishment of Anna Krasulina with an explanation of some details of the Belarusian legislation.

Chapter 1. The description of the case of political repressions for the professional (journalistic) activity against Anna Krasulina. 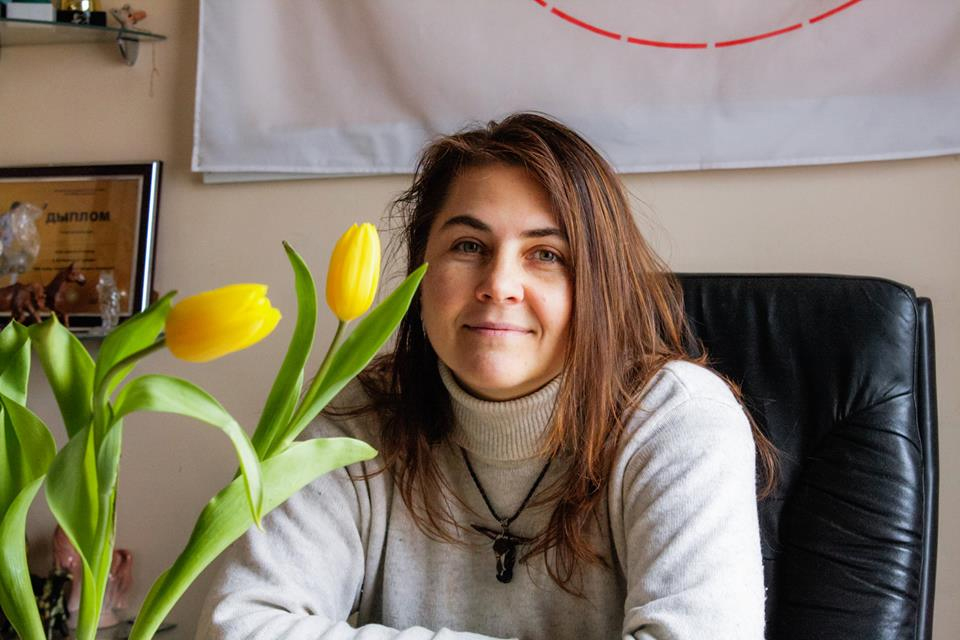 Anna Krasulina is the chief of the press office of the United Civil Party (UPC) and editor of the UCP‘s website ucpb.org

Anna Krasulina is formally a citizen of Russia; however, she has been living in Belarus since 2002 (16 years). Her husband, two (adult) children and parents also live in Belarus, and they (husband and children) are the citizens of Belarus. The parents are citizens of Russia.

Anna’s residence permit still has not been revoked.

Anna Krasulina is a disabled person of the third degree, and it was because of her disability that she did not apply for Belarusian citizenship. In 1992, she had an accident and underwent a serious surgical operation (replacement of the hip joint). In 20 years, the joint must be replaced. However, in Belarus, she notes, such an operation can only be done on a fee basis, and it costs very big money, which she cannot afford. In Russia, it is free, so, Anna, out of concern about her health, retains the formal citizenship of the Russian Federation.

As a result, Krasulin was re-operated in 2014 in Russia by physicians who got interested in her case. After the operation, Krasulina did not dare starting the procedure for obtaining Belarusian citizenship, as she was afraid to attract attention and be deported. As we see, it turned out she was right.

On November 13, 2018, officials in the Department of Citizenship and Migration (OGIM – after Russian abbreviation) of the Moscow District of Minsk, read out a decision to Anna Krasulina on her expulsion from the Republic of Belarus, with the requirement to depart no later than on November 30, and the entry ban for one year.

The official ground for the banishment were administrative offences: in 2016 and 2017, two police reports were compiled on Krasulina under article 23.34 of the Administrative Code (participation in an unauthorized rally), and in 2018 one more report on a bus fare not paid on time. But all the fines were paid off, the article on the administrative offence in the Republic of Belarus is doomed to removal in a year, and referring to the cases of 2016 and 2017 is illegal at least.

Below is the full chronicle of events:

On November 9, 2018, officials from the OGIM of the Moscow District of Minsk called Anna Krasulina from a hidden number and invited to discuss the issue of her “residence permit.” They insisted on meeting urgently on Saturday, November 10, 2018. Anna said she would be busy. The meeting was scheduled on Tuesday, Nov 13, 2018, at 9am.

On November 13, 2018, at 9am, the chief of the OGIM of the Moscow District A.Gaponenko said that “a letter was received, and it is about banishment from the country. The only question is timing. The decision will be taken by the head of the Department of Internal Affairs of the Moscow District at 3pm. If you keep yourself quiet, I can try to get 0.5 year for you. I do not guarantee the result, however.” Anna Krasulina warned she would appeal against these actions of the authorities.

On November 13, 2018, at 3pm, colonel D.I. Kolodinskiy, the officer-in-charge of the Public Safety Militia of the Department of Internal Affairs of the Moscow District of Minsk, read out the decision on the expulsion of Anna Krasulina from the Republic of Belarus no later than on November 30, with an entry ban for one year. When Anna requested in writing to let her get acquainted with the documents, the official refused. He avoided any discussion. It was only on Anna’s demand that he named the dates of administrative offences to which they referred:

1) Aug 19, 2016 – art. 23.34 – “for participation in (peaceful) unauthorized protest action” (the fine was paid, the decision was appealed against, the appeal was accepted for consideration in the UNCHR: files “Krasulina 001”).

2) Apr 21, 2017 – art. 23.34 – “for participation in (peaceful) unauthorized protest action” (the fine paid, the decision appealed against, the appeal accepted for consideration in the UNCHR).

In Anna‘s foreign passport of the Russian Federation, they put a stamp (expulsion for one year from Nov 30, 2018). They only handed a banishment notice.

On November 28, 2018 at 4pm, Anna Krasulina filed a complaint with a higher authority: the Main Office of Internal Affairs of the Minsk City Executive Committee.

On November 29, 2018, Mr. Karatsiupa, an official of the OGIM of the Moscow District, phoned Anna from a hidden number and told that the expulsion procedure had been suspended until the results of the appeal are received.

On November 30, 2018, at about 11am, they called from the Office for Citizenship and Migration of the Minsk City Executive Committee, and notified they had received an answer to Anna’s complaint sent to the Main Office of Internal Affairs, and invited her for acquaintance with it on Nov 30, 2018 at 3pm.

On November 30, 2018, at 3pm, officials let Anna get acquainted with the decision that stated the complaint was rejected. A female officer told Anna there were no more reasons for the deferral of the expulsion: “The term of your expulsion is today, on the 30th of November. And there is no more deferral. So, tonight at 0 o’clock…”

Within a month or earlier a trial was due to take place. 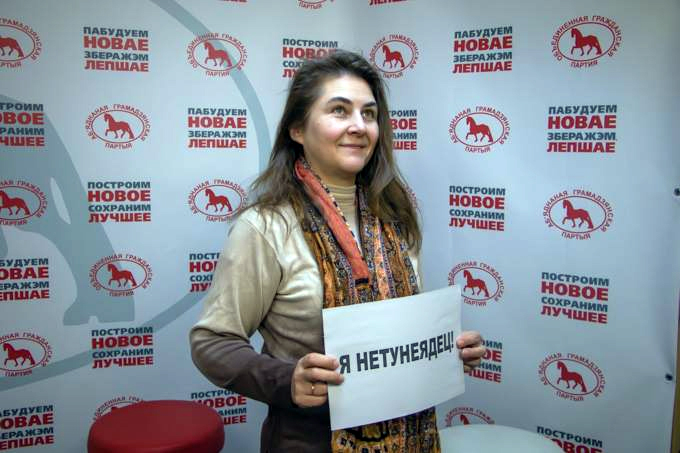 Chapter 2. The conclusions of Our House experts on the political underpinning of this case.

The experts (human rights activists and lawyers) of Our House consider the decision on the banishment of Anna Krasulina a politically motivated repression for her professional (journalistic) activity. Their opinion is based on the following reasons:

2. It was administrative offences that constituted the official ground for the banishment decision. In 2016 and 2017, two police reports on Krasulina were drawn up under article 23.34 of the Administrative Code (participation in an unauthorized action), and in 2018, one more for an unpaid bus fare. All the fines were paid. According to the Belarusian legislation, an administrative offence passes into oblivion in one year, so, at least referring to the offences of 2016 and 2017 is illegal. In other words, according to the legislation of Belarus, the Interior Ministry can only take into account the administrative cases of 2018. The only offence Anna Krasulina has committed in 2018 is her unpaid fare in a public transport. To expel Anna from Belarus just for one instance of fare evasion? This is absurd.

3. Anna got her first fine for participating in an unauthorized event: a picket for collecting signatures during an election campaign. But according to the Electoral Code of the Republic of Belarus, pickets for collecting signatures do not fall under the definition of an “unauthorized mass event” and do not require permission. But the picket in question was organized near the Interior Ministry and one of its elements was reminding passers-by of disappeared politicians, in particular, Yuri Zakharenko, a UCP member and former Interior Minister. So, the penalty for the first picket in 2016 was imposed on Anna illegally and she appealed against it to the UN Human Rights Committee. The second fine was imposed for waving a white-red-white flag (a historical flag of Belarus) near “Okrestino” (famous Belarussian prison), an action that also does not fall under the definition of an unauthorized action. So, both fines were imposed on Anna in violation of the Belarusian legislation.

4. For its internal purposes, the Ministry of Internal Affairs defined the term “public order” in the following way: “Public order is a system of will-based social relations… aimed at ensuring the personal safety of citizens… and at creating favorable conditions for the normal functioning of enterprises, institutions, organizations and public associations.” But Anna Krasulina, by participating in peaceful unauthorized protests, neither hindered the work of enterprises, nor interfered with the functioning of public organizations, nor threatened the personal safety of any citizen. Nor is an unpaid fare a threat to the personal safety of citizens or to the functioning of Belarusian factories and public organizations. So, the official ground for the banishment (“in the interest of public order”) is not substantiated and does not even comply with the internal interpretation of the Belarusian Ministry of Internal Affairs.

5. In addition, as human rights defenders, we believe that the interests of any social order related to the participation in unauthorized but peaceful mass events are in no way commensurate with the destructive consequences for the woman’s personal and family life, as it involves forcible separation of the child from his mother, the wife from her husband, and the daughter from her parents.

6. Thus, the punishment is disproportionally high given the insignificance of administrative offences. Expelling the journalist from the country for an unpaid fare in public transport, which happened once in her life and was immediately repaired by her paying a fine, is, in our opinion, an excessive measure of punishment. It turns out that the authorities punish her for a second time, whereas double punishment for the same offence is prohibited by the Belarusian law.

7. The striking quickness of responses and decision-making by law enforcement agencies is suspicious. As the human rights practice shows, if a citizen appeals with a complaint, it usually takes a month (30 days) for an answer to come to her (his) appeal. Now, we see that to the complaint Ms. Krasulina sent on November 28, 2018, to the Main Office of Internal Affairs of the Minsk City Executive Committee, a day later, on November 30, she received a response that stated that the expulsion from Belarus was justified and she was advised voluntarily to leave the country by the midnight. So, the authorities’ response to Krasulina‘s complaints was 30 times as quick as usual responses to ordinary citizens. This, in our opinion, clearly points to the political underpinning of this case.

6. The vagueness of the wording of the Belarusian legislation “On the legal status of foreign citizens and stateless persons in the Republic of Belarus” and the absence of a list specifying administrative offences relevant to this case, opens – as in many other cases of political repression – a room for political repression, because it allows to interpret the legislation in two ways. We emphasize that the law of the Republic of Belarus does not define the range and degree of danger of unlawful actions for which a foreigner can be subjected to such measures. The lack of such definition leads to very subjective decisions, especially if they are motivated politically, as is in the case of Anna.

7. Anna Krasulina is a disabled person of the third degree, so her expulsion from Belarus means that she is put in a state of danger to her health and life, in the absence of sufficient means of subsistence outside her permanent place of residence.

8. The purpose of the banishment is an attempt at disciplining Anna and curbing her professional (journalistic) activities. This was clearly indicated in a speech by Aleksey Begun, the head of the Department of Citizenship and Migration, who commented on the decision to deport Anna in the following way: “I cannot comment, but let her think for herself and assess her behaviour. When a person, for participating in unauthorized events, is slaped on the wrist once, twice, then the person, if he is not a citizen of the country and wants to be a citizen, must naturalize. If he fails to get naturalized and is a foreign citizen, she must understand what he is entitled to and what he is not.” 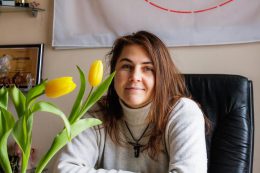