“Our House” wishes you all the best for the festive season and New Year. Traditionally our last Report of the year highlights some of the most prominent developments affecting Civil Society in Belarus.

In this report we would like to mark the contribution of ordinary activists to the processes that took place in Belarus this year.

Dialogue of the Year 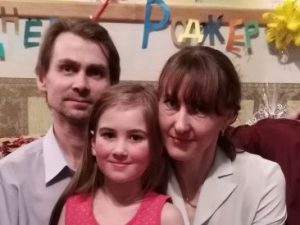 The winner in this nomination is the dialogue between the European Union and Belarus regarding the removal of 8-year-old Elvira from her mother – human rights activist Tatiana.  The eight-year-old girl had to spend almost five months in the orphanage where she was taken from a loving family as a way to punish Elvira’s mother for her human rights activism. Court hearings of the case and numerous complaints and appeals did not resolve the issue. However, after the dialogue with the Belarus’s authorities on the matter was initiated by representatives of the EU Elvira was returned to her family.

Fearlessness of the Year 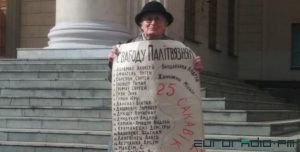 In the midst of arrests and detentions on March 24, 2017, a 70-year-old pensioner Nina Baginskaya arranged a one-person picket at the KGB building demanding to release all the detainees. This brave act shocked not only the KGB but also the police officers, who looked confused and lost for words and actions.

Escape of the Year 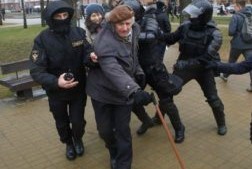 An 80-year-old pensioner, Jan Grib, was detained during a protest at 25th of March-2017, but managed to escape from the prisoner transport vehicle.

Justice of the Year 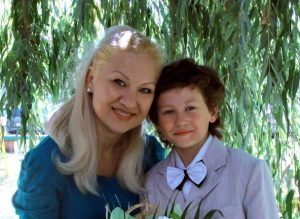 After a year and a half of the hard struggle an MA student of jurisprudence, Inna Sabiryanova, and her son, Nikolai, were removed from the register of “the socially hazardous families”. Inna Sabiryanova came to Minsk from a province, obtained a degree and got a job. After several years of hard work she managed to raise money to get her own place; it was not an independent housing, but a room in an apartment. Shortly after that, officials began to force Inna to sell her room at an undervalue. However, the woman refused to consider the option. To make her more complaisant social services put her family on the list of socially insecure family with an aim to take her son away from her. After a long struggle Inna won: she kept her son, the family was taken off the list and the persecution ceased.

Self-sacrifice of the Year 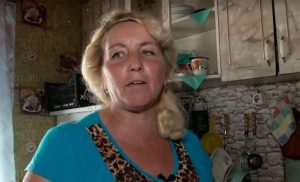 47-year-old Elena Kukol from Ivye cares alone for her 25 y.o. son who has an infantile cerebral palsy. Her husband left, saying that he does not need a son with a disability and would find a younger woman who is able to give birth to healthy children. In the summer of 2017, social security agencies began to threaten her with taking away the son, because the house is not repaired. Local officials demanded that Elena improve her housing conditions for her own money, that she change the floor and the wiring system in the house, otherwise they will give a fine, take her son away and deprive her of the parental rights. Desperation has led Elena to a difficult decision – to sell her kidney. She offered the kidney for sale in social networks. There was an uproar, and the Belarusians collected 5,000 dollars to help Elena to save her son. However, the officials did not calm down, and they took 650 dollars as a tax from the collected amount.

Consistency of the Year 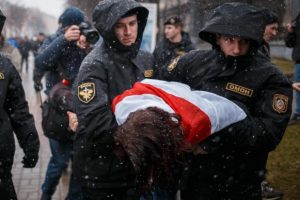 Alena Lutskovich from Oktyabrsky village of Gomel region, a participant of spring protests in Belarus, kept holding in her hands the white-red-white flag, a symbol of resistance in Belarus, even as she was carried by the riot police to the prisoner transport vehicle.

Mother of the Year 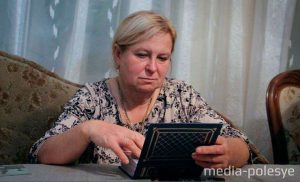 Svetlana Korzhich’s son Aleksandr from Pinsk was found dead only several months after being conscripted into the military service. The official version was a suicide. Despite all the pressure that was put on Svetlana Korzhich she questioned the official version, insisted on investigation of the circumstances of the death of her son, obtained evidence that it was not a suicide and raised the issue of corruption and tortures in the army. Her perseverance not only forced the investigation of her son’s death but also propelled reconsideration of a number of other cases.

The Annexation of the Year 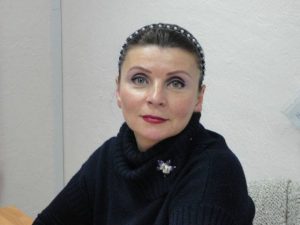 On September 4, 2017, the human rights activist Natalya Basalygo was stopped and arrested by Russian soldiers while she was carrying some food for her son who was a soldier at the time and took part in the joint Russia-Belarus military drill in Belarus. She was kept in detention for 3 days and got a fine. All that happened so struck Natalia that she created the Committee of Soldiers’ Mothers to fight for the rights of the conscript soldiers. The Belarusian authorities were so outraged at the idea of fighting for the rights of the conscript soldiers and of their parents that the newspaper Sovetskaya Belorussia has already devoted two articles to Natalia’s initiative, declaring it “a campaign of a probable enemy with the aim of destabilizing the Belarusian army.”

Courage of the Year 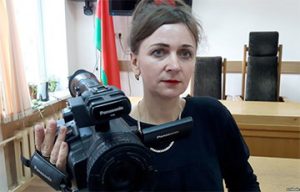 Journalist Larisa Shchirakova from Gomel, who was detained about 20 times during the year and was persecuted by state authorities, including a treat to take her son away, media bulling, spreading false discrediting information, targeted attention of the police, filing numerous cases against her and a number of fines.

Bravery of the Year 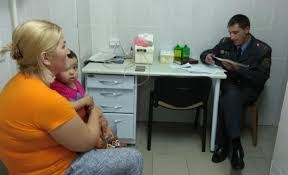 On October 7, a mother of four children, Galina Lazareva, from Bobruisk came out with a picket for decent work. On November 11, when Galina was hospitalized with a one-year-old child, the police came to the hospital at nights and tried to draft protocols for her participation in the picket. Social services immediately came to check her children, but could not find anything. For her protest Galina was fined.

Selfie of the Year 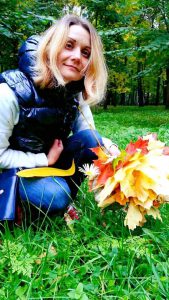 Lyubov Shevchik‘s Selfie, which she made standing in front of the riot police during the protests in spring 2017. For this selfie, she lost her home and her job and was on the brink of starvation. Thanks to the intervention of “Our House” Lyubov found a new purpose in her life: now she is an individual entrepreneur with own method of rehabilitation of people and a queue of clients. She also helps women who are in the same situation that she has been once.


Loyalty of the Year 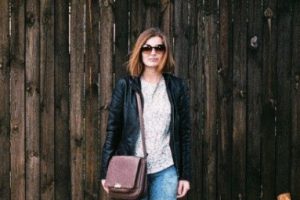 Marina Nosenko received 10 days of arrest for bringing food to her boyfriend, who was detained for participation in the protest actions against the imposing a tax on unemployment. This way the authorities wanted to make other people be afraid to express solidarity and bring the supplies to the detainees.

Hope of the Year 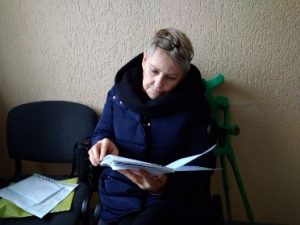 Anzhelika Kalatozishvili from Slavgorod became a person with disability because of a medical error. When she tried to bring the doctors to justice, local authorities began to pressure Anzhelika. It came to the point that the local authorities wanted to deprive her of room in the dormitory and actually throw her out on the street to die. Anzhelika bought a coffin for herself and got prepared to die. After the intervention of “Our House” Anzhelika not only sued her right to live in a dormitory, but also made them repair the dormitory. Now she helps other residents of Slavgorod to solve their problems. The coffin was not needed anymore – she had found the hope and the meaning of her life – to help others.

Humanism of the Year 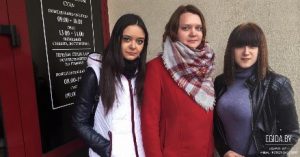 Elena Miroshnichenko, Yulia Malysheva and Artem Isachenko from Orsha were detained and fined for trying to feed homeless animals, provide them with medical care and to find them a new home. Together with some more friends, they visited a ‘special base’, where collected homeless animals were kept, to feed the animals. The conditions in which the animals were kept have shaken them; Yulia started a live-stream on a social media to find volunteers to take the animals. Yulia not only was detained and fined with others, she had to prove to the guardianship services that her two children have a good enough mother to be allowed to stay home.

Perseverance of the Year 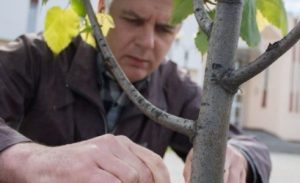 This year, Andrei Aksenov, an activist of “Our House”, forced all his deputies from the top down (a deputy of the City Council, a deputy of the Regional Council, a member of the Parliament) to report to him twice about their activities.

Naivety of the Year 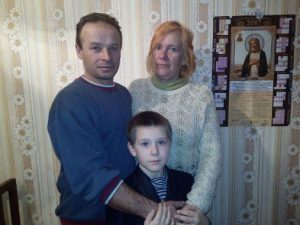 The mother of 5 children, Valentina Buslaeva from Zhilikhovo agro-town of Kopylsky district believed the Belarusian authorities and suffered for this. As a large family, Valentina received a house in Zhilikhovo, it turned out, that the house has a surprise – someone else’s unpaid utility bill. Valentina was so happy to get a house that she did not record the meter reading. A large debt for public utilities was put on the woman and in case of non-payment she was threatened with a removal of her three underage children. On 30 November, the children were about to be removed from the family, but the activists of “Our House” arrived at the meeting of the executive committee and did not allow it to happen. Authorities put additional pressure on the woman, late in the evening of 11 December 2017, the OMON broke into Valentina’s house and conducted a search, during which nothing was found. “Our House” continues to fight so that Valentina’s children are not taken away for other people’s debts. 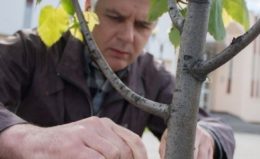