Repressions against WHRDs in Belarus

Born in Georgia, he worked in Slavgorod as a loader.

He lived with his wife in a hostel on Rokossovskogo Street.

His wife Angelica Kalatozishvili, a disabled person of the first category, is a human rights activist. 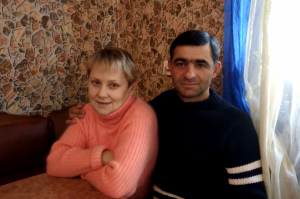 Angelica Kalatozishvili became the victim of a monstrous medical error that bound her to a wheelchair. Since she tried to achieve the truth and bring the guilty to justice, she became dangerous to local officials of Slavgorod, who began to revenge on her. They tried to punish her husband and subsequently to deprive her of his assistance. Because of her disability, Angelica needs to be accompanied by her husband; his role in housekeeping is also crucial.

In order to deprive Angelica her husband‘s support, attempts were made to charge him, with no real reason, with “petty hooliganism” (article 17.1 of the Code of Administrative Offences), which might end in his deportation. Accordingly, Angelica would be left alone.

The police compiled a false report was on Kakhaber. To the report, a testimony of witnesses (neighbours) were attached. But during the trial it turned out that the witnesses were not even present in one place at the time specified in the report, which follows from the records of their mobile phones. Thus, the witnesses turned out false. They and the police were inconsistent in their testimonies. Ultimately, the case was closed for the lack of evidence of guilt (Aleksandr Kurilin was the judge).

But the police did not stop with it.

In the second case, article 328 of the Criminal Code of the Republic of Belarus, which has now become political, was used. At the invitation of his neighbour Kachanov, Kakhaber Kalatozishvili went to his bathhouse. Then the police broke in and detained him and Kachanov on the suspicion of drug distribution. It is known that Kakhaber was tortured and beaten – in this way the investigation tried to get him to admit guilt.

In the meanwhile, a teenage girl from a neighbouring family told that the police began to put pressure on her to force her to slander Kakhaber: an alleged rape was even included into the case file and was there until the gilr’s mother, enraged by the police’s pressure on the teenager, took her daughter to a gynaecologist, where it turned out that she was a virgin. So, the police closed the case after the information.

The essence of accusations by the Belarusian system against Kakhaber is as follows: he went to the bathhouse of his neighbour to cut hair of the latter, and then somehow climbed over a two-metre fence and plucked poppy from a nearby field with the intention to distribute it. However, the owner of the field did not confirm these facts in the video, and the examination of the soil did not confirm the existence of poppy plants ever on this field. In the opinion of the investigation, the processing of the harvested poppy took place in Angelica’s meat grinder, but the examination of the meat grinder did not confirm this. Blood tests for drug did not reveal any traces of drug. The bathhouse was not prepared for bathing (which surprised Kakhaber, which he said it during the trial). Kachanov (Kakhaber’s neighbour) had earlier been convicted under article 328. Thus, there was a connivance between the police and Kachanov, drug addict (another suspect in this case), in order to frame Kakhaber Kalatozishvili.

Technically, Kakhaber admitted his guilt of an administrative offence, namely of the use of drugs while intoxicated. However, he categorically denied that he was engaged in the collection and transportation of drug raw material. We think this confession was made under torture and is untrue, because forensics did not reveal any traces of drug in Kakhaber’s blood, which would be impossible had he used it. It is true there was alcohol consumption, but in Belarusian villages, going to a bathhouse traditionally ends in drinking alcoholic beverages, which is not a violation of Belarusian legislation.

Despite numerous inconsistencies and the lack of evidence (all the forensic tests are in favour of Kakhaber), which, according to the Belarusian legislation, should be interpreted in favour of the accused, on December 13, 2018, at the trial of Kakhaber Kalatozishvili, the same judge Aleksandr Kurilin sentenced him to 2 years in prison. The sentences had not entered into force.

The Court of Appeal ordered the case to be reconsidered, which took place in the spring of 2019.

Again, strange things began to happen. For example, while transporting Kachanov (it was on the basis of his testimony that Kakhaber was accused), the police car stopped at the building of the Investigation Committee, possibly for some instructions. Representatives of the Investigation Committee, in response to the complaint, came out with the following version of those events: prisoner Kachanov felt too hot in the police car, and he was taken out “to get some fresh air”, no “leading” questions were asked… As a result, his testimony differed significantly from that in the first process in autumn 2018.

The court upheld the decision of the previous court: 2 years of imprisonment under article 328 p. 1. After serving the two-year sentence, Kakhaber will face deportation.

“Our House” considers this case politically motivated as the pressure for WHRDs in Belarus. 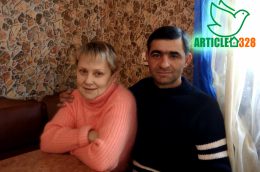