The purpose of this report is to try to reflect on the situation regarding the rights of socially and politically active women of Belarus (human rights defenders, peacekeepers, activists, politicians, journalists, bloggers and women doing journalistic work) in 2017 as objectively and impartially as possible, and reflect on trends that will continue in 2018 and require special public attention. This annual report includes statistics for 2017, as well as comparative figures for 2016. This report is public and open for the distribution, as well as citation. We want to emphasize that these figures are not final, and we operate only with those statistics and facts that we have. In reality, figures may be larger because not all cases come to our attention. The statistics of this report are collected based on the data provided by the Centre for Civic Initiatives “Our House”, Centre for Gender Initiatives “Adliga: Women for Full Citizenship”, the Centre for Human Rights “Viasna”, other human rights organizations, as well as publications in independent media.

Why does this report focus on the rights of socially and politically active women? Politically and socially active women are our target group; they are one of our main focuses and one of the reasons we do what we do. Moreover, repression against women results in the shrinking of the political places safe for them. Consequently, they are less likely to participate in political processes, and that is wrong because they constitute more than half of the population. Their experience and opinions are hugely important for developing our society as a democratic one. We want women to feel comfortable and safe when they go political. And we shall do everything we can to draw attention to their issues, to support them, to protect them and to form a solidarity around brave people who dare to disagree and who happen to be women.

We would like to draw your attention to the fact that you can contact “Our House” and\or “Adliga” for further information related to any of the information provided in the report.

Chapter 1. Comparative statistics of repression against socially and politically active women during the social protests against the unemployment tax in and after the spring of 2017

The year 2017 was rich with the most diverse cases of women persecution in Belarus. Women were detained in a variety of places: during protests, in the offices, at homes, in hospitals[1], on the field; they were threatened by children seizure and some children were taken away[2],[3]; they were fined, their properties were seized, they were put in psych wards, they were searched[4], their equipment was seized[5], they were fired from their jobs and were persecuted.

It is known that over the period from the year 2017 until now, the number of women detentions reached 272 individuals. Some women were detained several times.

Among those 272 women, 222 women were detained for participation in various protests – from the protests against Decree No. 3, which introduced the unemployment tax, to the protest actions against rising utility bills, Russian-Belarusian military drills, and hazing in the Belarusian army. Another 50 female detainees were female journalists or women performing journalistic work (bloggers, photographers, women who write posts in social networks, etc.) The number of women journalists and women who are engaged in journalistic work and who have been subjected to repression constitutes 18% (50 women) of the known total number of repressed women.

87 women were released after being detained; no reports or examination records were produced at this point.

The present fate of 90 more women for whom police reports were produced is unknown to us.

In 2017, 3 women were arrested or their property (such as a car or apartments) was confiscated.

Chapter 2. Comparative statistics of repression against socially and politically active women for 2016 and 2017

For comparison, we would also like to draw your attention to the statistics of repression against socially and politically active women in 2016 and in 2017:

As we see from the table, almost all the indicators deteriorated sharply. Nevertheless, we need to think about how to interpret these figures in a correct manner. We must admit the fact that the situation with regard to the rights of socially and politically active women dramatically deteriorated in 2017. Although “Our House” upholds to the view that the cause for such a difference in figures is that for some reasons other human rights organizations consider repression and persecution of women, as well as the problems of women “not important”, “not serious”, “not requiring the attention”, “secondary”. Because of that attitude women were less likely to be included in the previous year’s statistics. As a proof of our point of view can serve the fact that there are very few female names mentioned in the monitoring of other human rights organizations, although, as follows from the statistics, there is a lot to mention.

Chapter 3. Positive trends towards respect for the women’s rights of socially and politically active women in 2017

Chapter 4. Negative trends towards socially and politically active women in 2017

Chapter 5. The main challenges of “Our House” in 2018 with regard to provided statistics 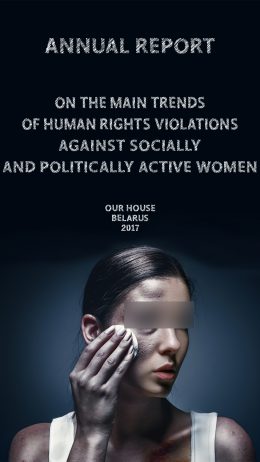