One of the main purposes of a human/women’s rights monitoring is to investigate and report a specific incident or allegation of human rights violation. Understandably, such reports often make a very grim reading. In this report we would like to break this sad tradition and share some of the successes of our monitoring project.

First of all, it should be mentioned that this particular monitoring project is not limited to simple fact-finding and reporting activities. It also creates a space for a complex support of the survivors of the state repressions, helping the ‘victims’ to author the political change in the country. In this system, observation and investigation lead, for example, to legal aid and assistance; campaigning for restoration of individuals’ rights; seeking punishment for the violators of the human rights; psychological support, education and capacity building/development; and recommendations of changes to the legislation. This is what happens after a human rights violation is established as a fact; an after-effect of the fact-finding process.

In this report we will focus on this after-effect area, making visible not so much the abuse of women’s rights as the women fighting for human rights and their successes. Some of the names mentioned below might sound familiar to the constant readers of our reports and we hope you will be pleased to hear about these women’s achievements and happy endings of some of their stories.

Our heroines and their achievements

It goes without saying that our heroines are not only those activists who have an official record of victories and success of won court cases; to us every woman that takes a stand for their rights and dignity or the rights of others, refuses to be abused and speaks out against the state and state representatives when their rights are violated, is a heroine and a human rights defender. These are just few of them. 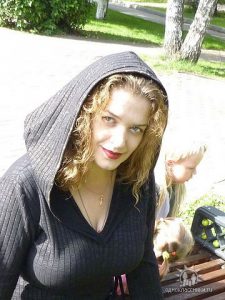 Irina’s son was bullied at school and while most other parents decided to either move their children to a different school or comply with the situation, Irina chose to rely on the law to solve the issues at her son’s school. During several years of her crusade against managerial incompetence and violations of laws by the school administration she made enemies with some other teachers, parents, police, juvenile committee, and a number of civil servants from the department of education. Despite the school hostility, state bodies’ disrespectful behaviour, emotional burnout, exhaustion from numerous court hearings and complaint procedures, Irina did not give up. She kept using existing legal mechanisms and media (both social and independent) to protect her rights, the rights of her son. She also invested her time in monitoring the situation in her son’s school and in helping other parents in their conflicts with the educational system over the human rights issues. In the last two years of her human rights activism she managed to: 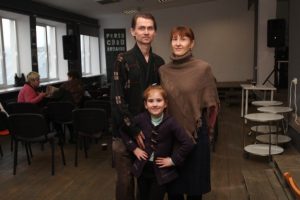 Elvira Mironova (in the centre) with her parents, Eduard and Tatiana

Eight year-old Elvira Mironova was taken from her parents in the end of August 2017. After examining the documents and correspondence of the Mironov family with the state representatives, as well as supervising / attending their meetings, the team of experts of “Our House” came to the conclusion that the family was being persecuted for their adherence to legality, the rule of law and human rights. There is a strong case to be made for Elvira’s taking from the family to be politically motivated and be the revenge on and pacification of a very vocal and active woman who also happened to be a mother.

In the course of four months the family experienced serious pressure from the state bodies including: rude and humiliating treatment by public officials; fabricated accusation of public disorder; detention based on false accusations, withdrawal of information, provision of incorrect information; forged documents against the family, provocations from the side of civil servants; unfair trial; forceful fingerprinting – to name a few.  Elvira’s health was deteriorating and she was hospitalised several times. Elvira’s health, provocations by the civil servants, and sluggishness of the bureaucratic process being deliberately slowed down by the public officials caused us great concern. We reached out to the international community with a call for solidarity and support, as they are a powerful tool for raising the spirit of people experiencing repressions, calling to account the responsible individuals and to pressure public officials into restitution of the violated rights. And we were happy to see that efforts of so many people both inside and outside the country resulted in the decision of the guardianship service for Elvira to be taken home by her family in December, after almost four months of being in a children’s home. 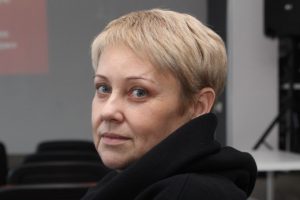 Angelika is a person with a disability, in fact, with a disability of the first degree – the ‘worst’. She barely can walk and requires a wheelchair. She was not born with this disability; it was not an accident that left her unable to walk. It was a medical mistake, composed of local doctors’ negligence (or poor qualification), unwillingness to do work, and indifference to a lay person’s life and suffering. This costed her years of unbearable pain, a lost job and the disappearance of life as she knew it. Doctors treated her for cancer while she had thyroid issues; she was told she would die. She survived by chance, in spite of everything, because of a supportive family that refused to give up, because of the sold car that paid her trips to the capital where she was at last diagnosed correctly.

After lengthy, exhausting, and painful months on a hospital bed and a long recovery at home Angelika realised that some of the medical support she was entitled to by law was not provided to her. As she started to fight for her rights and lawful interests she was met with hostility and a lot of pressure from the state representatives. They tried to evict her from her room, take her wheelchair away and lower the degree of her disability, which not only would reduce her livelihood but would take away the right to assistance at home. 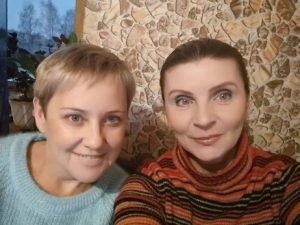 There was also an attempt to deport Angelika’s husband – a citizen of Georgia and Angelika’s biggest help and support – from Belarus..

Despite the pressure and open threats made by the state officials against her and her family members, Angelika went public with her story both in the media and on social media. She also filed a court case and several official complaints, winning most of them. She made the state officials to recognise her disability and the needs for assistance; she kept her room and protected her husband from unlawful deportation. She also continues to investigate and make public instances of corruption and human rights violations in her region. In her quest for justice she is assisted sometimes by another female human rights activist – Natalia Goriachko-Basalygo. 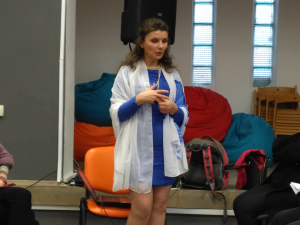 Natalia is an activist with many years of experience in human rights activism. Over the last 6 months she was detained three times; each time she was arrested for 3, 10 and 15 days respectively. That is 28 days spent in jail. The reasons for the first arrests was an attempt to visit and bring food to the youngest of her four children, who was a conscript at the time and was participating in the Russia-Belarus military drill in 2017. The second and the third arrests happened after she demanded a security officer of the Court of Frunzenskiy Rayon in Minsk to identify himself and show his documents as per laws and regulations. The last detention happened shortly before the New Year and as a result Natalia spent the New Years’ Eve and the first several days of 2018 in jail. Despite such pressure Natalia went on and organised, with support of ‘Our House’, an organisation for mothers of conscripts in Belarus. 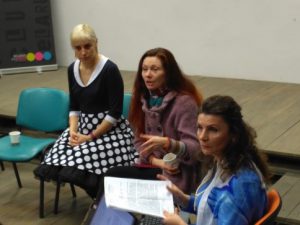 The Committee of Soldiers’ Mothers that Natalia started together with some other women was officially registered in Belarus in autumn of 2017; it is aimed at supporting human rights of the conscripts and career soldiers and of their families, as well as exposing human rights violations within the Belarus’s military.

This is the first part of the report on success stories and achievements in women’s rights in Belarus. In the following part we shall continue telling these stories as well as offer some general observations on what they tell us about camaraderie, international solidarity, fruitful strategies of human rights activism, and support networks in Belarus.

The report is prepared by: Olga Karatch, Evgenia Ivanova 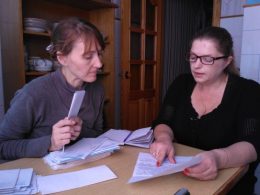