Within the framework of the Decree №18

In 2006 in Belarus President’s decree №18 “About Additional Measures on Governmental Protection of children in socially hazardous families” took effect; the law was meant to protect children’s rights and ensure legislative realization of their interests. According to this document state bodies had to detect families where children were in social dangerous situation (SDS) and identify when the parental rights were to be involuntary terminated and a child removed from the family. Unfortunately, the Decree did not provide precise criteria for identifying SDS status of a family. This, in our opinion, resulted in a series of wrongful and erroneous children removals, as well as mass and systematical violations of the children’s rights by governmental agencies.

Any “disadvantage” or a problem with a family from the authority’s point of view can lead to the family being labeled as socially hazardous and lead to removal of children. Since the heads of local authorities bear personal responsibility for the decree’s implementation in their constituency, they involve into the process of identification of socially unreliable/ problematic families by schooling institutions, medical institutions, social services, police, firemen, housing and communal state agencies.

To date, the very fact that a family is in need of support can be qualified as a sign of the family being socially problematic and hazardous. People are afraid to ask for help social services in any crisis situation because this creates a risk of children being removed from the family. Probably with this fear of sanctions is connected the fact of unclaimed crisis room services, created on the bases of social service institutions. People are afraid to be deprived of their children if they use these services.

We especially would like to point out the procedure of children withdrawal: children are withdrawn in such a non-ecological, unfriendly and violent way, that as the result of it children quite often get serious psychological traumas.

Our monitoring demonstrates that the most wide-spread reasons for marking families as socially problematic and removing the children from their families in 2017-2018 were:

A) poverty of parents, especially parents who have many children;

F) the abuse of parental rights;

We would like to present several cases, where in our opinion there was no acute need of children withdrawal and provision of help to the family would be a more appropriate way of dealing with the situation. 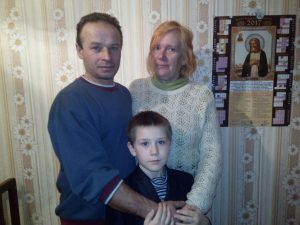 Valentine Buslaeva with the child and her husband

A mother of five, Valentina Buslaeva from Zhilikhovo agrotown of Kopyl district, moved in a social housing which turned out to have someone else’s enormous unpaid debts for the utilities. This debt was put on the woman and the authorities threatened to withdraw her three juvenile children if she would be unable to pay them. On November 30 they attempted to withdraw the children, but an activist of “Our House” intervened. The woman faced additional pressure by the authorities; she started to receive death threats because of her complaints and applications to human rights activists; on December 11, 2017 late at night officers of the special police units broke into Valentina’s house and carried out a search and found nothing (it was not clear what they wanted to find).

Human rights activists of “Our House” raised money and payed off the debt. At the moment the children are staying with their family. 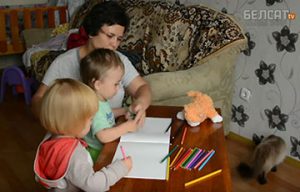 Marina Mokas and her children from Dzerzhynsk

On September 6, 2017 a multiple-child family from Dzerzhynsk was labeled as a family in socially hazardous situation because of their electricity debts. Because of their utilities debts, the family cannot use the special tariff plan designed for families with many children which provides a 50% discount creating a deadlock for the family.

Mokas family’s total income is estimated at 750 BRB (310,5 Euros as the equivalent) per 7 people. Last year the husband’s salary was halved, now he is unable to find another work. Unpaid utility bills put five children under the threat of withdrawal.

After several publications in media a lot of concerned citizens responded to the call and helped the family to pay their electricity costs. The local authorities proposed Marina to apply for target social assistance. At the moment the children are staying with their family. 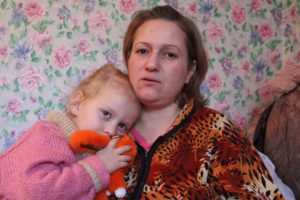 Elena Mikulich and her daughter from Gomel

On October 4, 2017 the Commission on Minors’ Affairs decided to withdraw 4-year old daughter and 16-year old son of Elena Mikulich, a widow from Gomel, because of her 2 000 BRB (828 Euros) utilities debt. Half of the amount is an assessed interest.

Elena is a mother to four children. The youngest daughter is attending day care.

Elena’s work schedule made it very difficult to pick up her daughter from the nursery. She contacted Vice-Chairman of the Commission on Minors’ Affairs in Gomel Administration of the Zheleznodorozhniy District Marina Osadchaya with a request to change such an inconvenient for a single mother work schedules. Instead of help she received a very hostile treatment from the administration of her daughter’s nursery, including threats that the child can be taken away.

Elena left home to prevent her children being found and taken away. While she was away from her home town she lost her job. Her older children helped with money. Meanwhile the reason to take the children away was found – the unpaid utilities bills.

When the situation was made public via media the woman was given work as a cleaning lady; a full-time job gives a chance to a family with many children to receive the target social assistance. The Housing Service Enterprise “Selmashevskoe” was given instructions to redo the floors in Elena’s flat, to improve warmth insulation of the flat; Elena’s son was provided some needed medical treatment. Fellow citizens also helped with money to ensure that Elena Mikulich was able to pay the bills. At the moment the children are staying with their family. 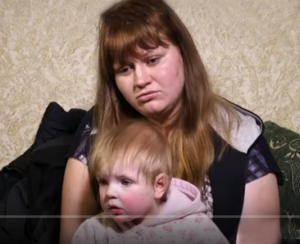 Veronika Glebovich from Negoreloe and her son

On January 10, 2018 a mother with many children Veronika Glebovich was threatened by local authorities that in case of non-payment for her utility debts for social housing the electricity would be turned off, her children taken away and she would have to pay almost 100 euros a month for children’s’ stay in the state institution.

Veronica’s utility debt was almost 5000 BRB (more than 2000 Euros as the equivalent); 1700 BRB is the debt itself, the rest is interest. Veronika is on maternity leave and she receives almost 420 BRB as the child allowance. The father of the children earns about 300 BRB. There is always a shortage of money. The Housing agency believes that taking away children (or at least threatening to do so) is the only way to collect money. The power company has already sent a warning that they are going to shut down the power supply if the bills are not payed; because of children the electricity was not cut off. 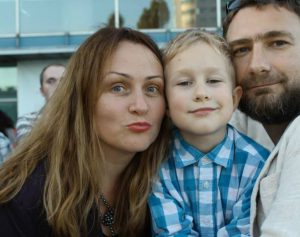 In April 2018 the family of well-known Belarusian designers, Julia Golovina and Sergey Skripchenko, received a call from the school their child attended and were informed that because of their utilities debts their family is put on the list of the families in socially dangerous situation.

According to Julia Golovina, she and her husband work as individual entrepreneurs and their income varies from month to month. They were not able to pay their utilities bills for two months before a letter to the school was sent. At the moment the child is with his family, but the stuation can escalate at any moment. 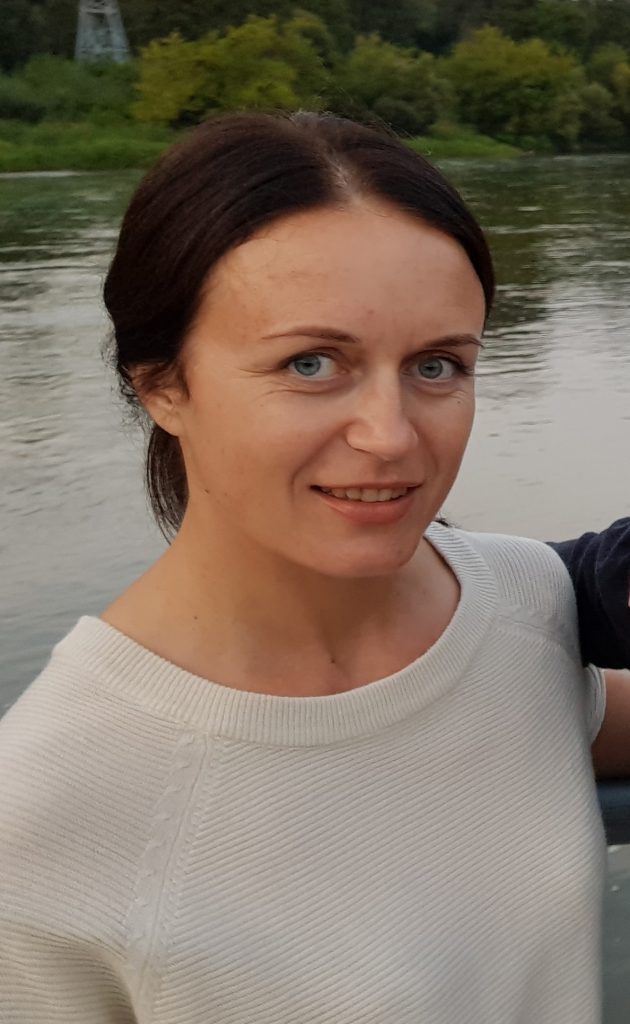 A committee visited Strelchenko’s house in order to check the logging conditions of her two children. Natalia links this action with her appealing the decision of the Court of Dubrovno that found her guilty in March 2018 of insubordination to the law enforcement officials’ legitimate orders. The formal ground for the Committee’s visit to Natalia Strelchenko’s place was a notification that Natalya did not pay her gas supplies bills supply for January, February and March, 2018. In fact, there were no debts, Natalia payed the accumulated bills before the documents from the gas company were issued. Despite being informed about that, the committee carried out an inspection visit to Natalia’s place anyway. The inspection revealed that the children had everything: a place for rest and for study, they are provided with everything necessary and had good school performance. 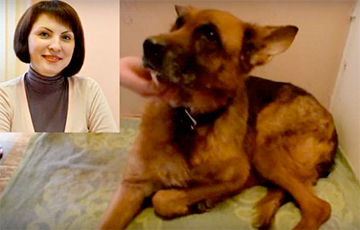 Antonina Shainuk, a mother of four from Gomel, was threatened on the 18th of May 2018 to be put on the list of the families living in socially hazardous situation by the head teacher of the school that Antonina’s children were attending. The reason for that were children’s drawings on the wallpaper and an old sick dog living in the flat. The conflict between Antonina and the head master evolved into the visit of a special committee. According to Antonina, the head of the committee started to quibble from the doorway. The committee demanded to replace the wallpaper and to put the dog to sleep.

A local blogger Artem Shaporov found out that the real reason behind the visit and threats were not timely payed utilities bills and not paid “voluntary-compulsory contributions” the school authorities were demanding from Shainuk. 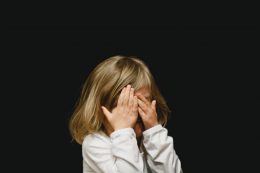