The State List of Historical and Cultural Values ​​of Belarus includes 5585 objects. In particular, there are unique monuments of architecture, history, archaeology and urban planning. In every region of the country, there are at least several objects with the status of historical and cultural value. However, apart from special plates, the authorities do absolutely nothing for their safety. The reasons are commonplace – lack of funding or other needs to spend the money.

In this case, the care of monuments and historical sites falls on the shoulders of patrons. In December 2020, the writer Andrus Horvat bought the abandoned Narovlya palace, which is more than 200 years old. After the accident at the Chernobyl nuclear power plant, the Narovlya region ended up in the contaminated area, the palace where the orphanage was, became empty and began destroying. Andrus Horvat plans to restore it with the help of funds from caring people.

In 2020, it became known about the destruction of a three-century church in the village Knyazhitsy, Mogilev region. Residents asked the authorities if they plan to allocate funds for its reconstruction, but the answer was unequivocal – there is no money. The entrance to the church and the windows were closed with planking – and that was all. 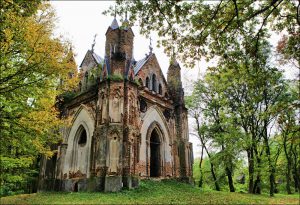 In the village Zakozel, Drogichin region, an ancient landmark – the chapel of the Ozheshko family – is also destroying. The famous Belarusian Eliza Ozheshko hid in the chapel the general Romuald Traugutt, who led the Kobrin rebel detachment during the uprising of 1863−1864. The restoration work in the chapel costs 380 thousand dollars, but there is no money for this. However, after the visit of the prosecutor’s office, the Drogichin regional executive committee allocated 50 thousand rubles (a little more than 19 thousand dollars) for the restoration.

Ruined chapels, castles, churches are in almost every district. But on the Internet, you can find only a couple of dozen stories about monuments in a deplorable state. And only a few have new owners who undertake restoration on their own or through crowdfunding.

ICCI «Our House» several times raised the issues of preserving cultural monuments. In 2012, thanks to the intervention of activists, it was possible to convince the Minsk authorities not to touch the mass grave «Blood Stream», where prisoners of the Drozdy concentration camp are buried. Excavation works near the protected area have been suspended. 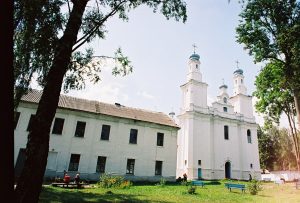 In 2012, activists interrupted the destroying of the ensemble of the Basilian monastery in Tolochin. As a result, the executive committee allocated significant funds for its restoration.  In 2013, activists raised the issue of what was happening in the Catholic church in Smolyany, Orsha district, where local vandals demolish the old building. An appeal to the authorities was drawn up.

In 2013, «Our House» told about the destruction of cultural monuments in Grodno. In particular – about the absence of the status of historical and cultural value at the house where poet Larysa Heniyush lived, about the emergency condition of the Church of the Holy Virgin Mary in Berestovitsa and the Krevo castle. By the way, in 2014, historians became interested in the fate of the Krevo Castle, and since 2018, restoration is underway here.

In 2018, the site of «Our House» published material with a plan of saving the Oshmyany synagogue, built in 1912 and preserved in its original form. In 2020, information that the building was undergoing an assessment of its technical condition and was preparing for restoration appeared.

While a large part of the state budget revenues goes to riot police and the construction of concentration camps, many unique attractions can disappear under the influence of time and unscrupulous owners. We hope that after defeating the usurper, we will finally have the opportunity to start restoring historical sites. Together we can save the monuments and preserve the rich heritage of Belarus.