All the years of his rule, Lukashenka closed theatres, saved Belarus from art schools, rural cultural centres, theatres, concert halls. Some of the buildings were no longer suitable. Some did not please the authorities, and some were simply needed for sale. “Our House” has repeatedly raised the topics of the destruction of institutions, the closure of cultural hubs and spaces. We remember how we prevented their liquidation. 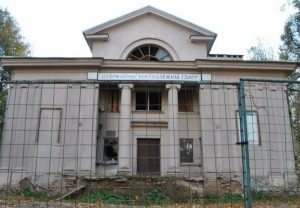 Many buildings of cinema and theatres, favoured in the USSR, became abandoned during the independence era. It looks especially miserable against the background that there are fewer theatres in Belarus than there are prisons. In 2012, activists of “Our House” monitored abandoned constructions in Minsk. In the monitoring, we photographed and mentioned buildings destroyed in different parts of the city. Among those listed the former Sovremennik cinema on Kharkiv Street and the State Youth Theater located on Masherov Avenue was. The Sovremennik cinema disappeared a few years later – they wanted to build a cultural and entertainment complex here, but for unknown reasons, it failed. As a result, the complex turned into a long-term construction, and the adjacent Tuchinsky Square turned into a littered space. The building of the youth theatre was more fortunate – it was renovated, and it housed a Theater-studio of a film actor. And the youth theatre moved to Kozlov Street. 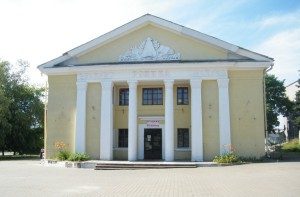 In the same 2012, another auction for the sale of the Rodina cinema passed in Borisov. It was in favour in the Soviet years – sometimes it was impossible to get tickets for the sessions. However, during Lukashenka’s rule, no one needed him in a city with 140 thousand inhabitants. Although the theatre stays in the city centre, the authorities decided to close it. It is noteworthy that the building appeared at auction at a price of almost 2 billion Belarusian rubles (171842 euros at the exchange rate as of July 2012). The right to conclude a land lease agreement for 25 years was sold for an additional 400 million Belarusian rubles (more than 38.5 thousand euros). The cinema was called “Rodina” – there is an irony in this. “Our House” wrote about it. The future fate of the cinema is quite sad: in 2016, the building was purchased for a hotel, but nothing came out of the project, and in 2018, the authorities decided to demolish it.

The Belarusian state also does not care about historical and cultural values and monuments. The buildings where famous cultural figures, politicians, scientists lived are taken away from the status of values, thereby allowing the city authorities and ordinary Belarusians to do whatever they want with them: buy, rebuild, turn into cafes, hotels and shops. And the protection of such buildings falls on the shoulders of non-governmental organizations. In 2013, “Our House” sadly reported that in Gomel, it was not possible to defend a wooden building with a unique carving on Volotovskaya Street, 17. The Ministry of Culture refused to give the status of historical and cultural value to the famous house where Irina Paskevich lived and which was one of the most impressive among the wooden buildings of Gomel. At the same time, the status of historical and cultural value was given to four houses along the street of the Paris Commune. Nothing threatened them. The danger was that the house could be demolished, and a new store or shopping centre could appear in its place.

A quarter in Mogilev faced the same problem: the state stopped protecting the houses on Lazarenko street. “Our House” noted that not all buildings are in satisfactory condition, and some of them can no longer get repair since they are recognized as an emergency. According to the city authorities, it was possible to save the historical and cultural heritage by selling it to investors. But not everyone wanted to keep the buildings in their original condition. The houses appeared in Mogilev at the beginning of the twentieth century, but this did not prevent the decision to rebuild them into a shopping and business centre.

In 2013, we wrote about how cultural monuments are being destroyed in the Grodno region. In particular, the house of the poet Larisa Geniyush didn’t get the status of historical and cultural value. It is noteworthy that Larisa Geniyush was the general secretary of the BPR Government in exile, helped Belarusian emigrants, political refugees and prisoners of war. For this, the Soviet authorities suspected her of having ties with the fascists. Larisa Geniyush got a sentence of 25 years of imprisonment in correctional labour camps. The poet served it in the Inta and Abez camps, as well as in Mordovia. After her release, Larisa Geniyush lived in Zelva under the supervision of the KGB. The reason for the non-recognition of her house as a historical and cultural value lies precisely because, after more than 70 years, the same events are taking place in Belarus.

After the elections, the illegitimate Belarusian authorities returned to the practice of destroying cultural institutions and buildings. “Our House” could not help but pay attention to this. On January 5, 2021, the cultural hub “Ok-16” was closed in Minsk without prior notice, half an hour before the start of the performance of the Modern Art Theater. A few years ago, Belgazprombank bought the former factory workshops of the Minsk Plant of the October Revolution – cultural spaces, cafes, halls for lectures and film screenings appeared here. The Minsk public loved to spend time here, and the authorities rented premises for the “TEART” and “Listapad” festivals. The formal cause for the closure of the hub was the order of the Ministry of Emergency Situations. But the most likely reason is the hub director, Maria Kalesnikava, who has been a political prisoner since September 7, 2020. In the article about “Ok-16”, “Our House” condemned the space closure and expressed solidarity with the management of the art site and all cultural figures who worked on it.

For the International Day of Monuments and Sites, “Our House” has prepared an overview about destroying ancient and cultural values in Belarus. There are more than 5.5 thousand of them in the country. But almost nothing is being done to preserve them, as we have already written. The care of monuments and authentic places falls on the shoulders of patrons and just not indifferent Belarusians. In the review, we mentioned the stories of several attractions. We wrote about the palace in Narovla, which is more than 200 years old and which the writer Andrus Gorvat bought. Also, we told about the chapel of the Ozheshko family in the Drogichin district, where the famous Belarusian Eliza Ozheshko hid General Romuald Traugutt and the Oshmyany synagogue, for the sake of saving which “Our House” prepared its plan.

In April 2021, Belarusian Foreign Minister Vladimir Makei said that the sanctions threatened civil society in Belarus. “It will not lead to anything good. Moreover, this will lead, if the situation continues to escalate, to the fact that there will be no civil society, which our European partners are so concerned about,” he said. On July 13, 2021, at a meeting with Putin, Lukashenko said: “These vile 1.5 thousand NGOs… What they were doing is clear. They were financed from outside. And we all thought: well, okay, this is a democracy, let’s talk, cooperate. So we got the corresponding results.” As a result, in July 2021, the destruction of non-governmental organizations began in Belarus. On July 22, 2021, it became known that authorities closed more than 40 of them. Among them are cultural formations: the information and cultural centre “InitiArt”, “Art Syadziba”, four cultural and educational institutions, a Workshop of social cinema and others. The list appeared on the website of “Our House”.

Unfortunately, the elimination of Belarusian culture does not end there. The illegitimate usurper does not stop at anything – he needs to make Belarusians silent, work slavishly and support the course of power. We hope that this period of Belarusian history will end as soon as possible, and we will be able to restore everything that the crazy dictator destroyed.