From the first days of the strikes in August, workers of enterprises who embarked on the path of struggle against the Lukashenka regime got support and assistance. People supported them financially, morally, recorded videos, drew posters, created posts on social networks. A year and two months later, the strike committees are still fighting. Today we will tell you what kind of support they received from “Our House”.

October 2020 was marked by the announcement of a People’s Ultimatum, according to which the illegitimate government was required to stop violence on the streets, release political prisoners, and Lukashenka had to resign. Due to non-compliance with these requirements, a people’s strike was declared. Employees of the enterprises “Grodno Azot”, MWTP, “Belkommunmash” plant, “Atlant”, Motovelo, BelAZ, MAP, Integral, students and teachers of universities, schools, doctors, cultural figures joined the People’s Ultimatum. In response, the authorities began to dismiss employees who supported the strike, and Lukashenka ordered to expel university students. In the results of the last week of October 2020, “Our House” told about Belarusians suffered after the People’s Ultimatum. We also supported all those who are fighting for the future of a free Belarus.

In March 2021, “Our House” wrote about the “Belaruskali” strike committee struggle with the partner of the enterprise – the Norwegian company Yara. In September 2020, after statements about strikes at Belaruskali, Yara representatives came to Belarus for talks. In December, their second visit to our country took place – then Belaruskali has put forward conditions that need to be fulfilled to comply with the Code of Conduct for Business Partners. On January 11, 2021, the Belaruskali strike committee called on the CEO of Yara International to demand that the management fulfil its promises. And already in February, a petition appeared in which Belarusians asked Yara to stop cooperation with Belaruskali, since the company “feeds” the power apparatus of Belarus, and funds from projects of Yara and “Belaruskali” will most likely go to the organisation and maintenance of concentration camps. A petition calling on the Norwegian potash company to respond to what is happening has collected more than 50,000 signatures by March 1, 2021. A link to it appeared on our website.

On March 8, 2021, Olga Karach met with opposition leaders in a joint stream dedicated to International Women’s Day. Vitaly Dyadyuk, a representative of the “Belaruskali” strike committee, came to congratulate Belarusian women. He expressed gratitude on behalf of the strike committee and from all miners and factory workers of the country: “Separately, we want to congratulate those women who are now illegally deprived of their freedom, who have thrown away their fear and opposed lawlessness. You turned out to be braver than some men in difficult times. Hold on, don’t lose your courage! We work every day, 24 hours a day, to bring our victory and your freedom closer.”

On March 25, 2021, Freedom Day, we released a digest about how Belarus celebrated this holiday. We devoted a separate paragraph to the detentions that took place throughout the country that day. Among those arrested were members of the strike committee. Pavel Batuev and Dmitry Karak, strike committee activists, got detained in Soligorsk. In Novopolotsk, four “Naftan” employees were sentenced to 15 days of administrative arrest: Sergey Lapunov, Andrey Shkirenko, Alexander Kapshul, Alexey Drobitsky.

In April 2021, the history of one of the largest strike committees in Belarus, the Belaruskali strike committee, appeared on our website. In the article, we wrote about the first strike days, about the miners who joined the strike, about repressions against workers. We also mentioned the reaction of Belaruskali’s Norwegian partner, Yara, to the situation at the plant. It is also significant that Belarusian diasporas expressed their support for the strike committee of the enterprise. Rallies calling for Yara were held in Ukraine, Russia, Germany, Poland, the USA and other countries. 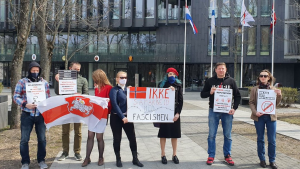 Also, in April 2021, the ICCI “Our House” team supported the action at the Norwegian Embassy in Lithuania and collected signatures under an appeal to the Norwegian government with a request to influence the decision to terminate the YARA contract with “Belaruskali”. Thus, the Belarusians wanted to remind the world community and Norway that, in addition to neglecting safety standards at work, “Belaruskali” continues repressions against dissident workers and finances the regime of dictator Lukashenko. 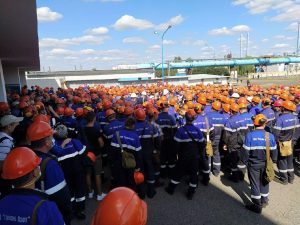 We told about how the strikes began in the country in the chronicles of August 2020. On August 13, 2020, several metropolitan enterprises went on strike. “Minskpromstroy” appealed to the head of the Federation of Trade Unions of Belarus, Mikhail Orda. In it, the workers demanded an end to violence and bloodshed, violation of citizens’ rights to freedom of speech and free expression, and recognition of the August 9 elections as invalid. “Keramin”, “Belmedpreparaty”, MAP, Integral employees, the 3rd ambulance substation, and the 4th hospital personnel also joined the strikes. In the morning, news about a strike at the “Himvolokno” plant came from Grodno. “Grodnozhilstroy”, where about 300 employees refused to work after the morning trade union meeting, joined the campaign. The strike was announced at the Brest plant “Gefest-Technika”, Zhodino plant BELAZ, Bobruisk plant “Belshina”.

Our chronicles preserved the history of August 17, 2020, the day when the strike met the dictator at the Minsk Wheel Tractor Plant shouting: “Go away!” The illegitimate president, stunned by this turn of events, came into conflict with one of the employees of the enterprise – Andrei Sudas, who was later detained. On the same day, the director of the Kupala Theatre, Pavel Latushko, was dismissed. And already on August 18, Kupalovsky’s employees announced that the next theatrical season would not take place. The troupe put their resignation letters on the table. People’s strikes continued on state TV channels: BT and ONT. Other enterprises of the capital also continued to strike: BMP workers stopped the line, Minsk TPP-4 declared solidarity with the people, a column of workers of the Minsk Motor Plant went out into the street, and the workers of the Minsk Electrotechnical Plant, along with thousands of other people, came to support the workers of the MWTP.

In the chronicle for August 19, 2020, we remembered how the riot police arrived at the MTP checkpoint in the morning, which did not allow factory employees who came to apply for “leave at their own expense” to enter the enterprise territory. On August 20, 2020, the detention of the head of the strike committee of the MAP, Yevgeny Bokhvalov, was reported. It also became known about other cases of intimidation of people who joined the people’s strike. On the same day, “Belaruskali” employees gathered on Soligorsk main square, but security forces dispersed people.

In August 2021, we published the history of the Belarusian strike committees. We recalled the strikes of 1991 and the loudest protest action on April 24, 1991, when people stopped the service near Orsha railway station. We mentioned 1996 when the “Strike of Entrepreneurs of Belarus” was formed in Belarus. One of the activities of the strike committee was assistance to convicts. On November 25, 2003, the strike committee of Entrepreneurs transformed into the “National Strike Committee of Belarus”. Since its foundation, its chairman has been a businessman and former political prisoner Valery Levonevsky.

Also, in August 2021, Olga Karach and ICCI “Our House” reacted to the statement of the president and CEO of the Yara campaign, Svein Tore Holsether. In it, he said that the company is trying to use its presence in Belarus for the sake of human rights. And Yara planned to consider the decision of termination of cooperation with “Belaruskali” by December of this year. “Such statements are demagoguery aimed at diverting attention from the main problem – direct financing of the regime through the purchase of Belaruskali products. We believe that Yara, represented by its leadership, decided to take advantage of the political situation in Belarus. But she made the wrong bet, deciding that the people of Belarus would believe in the next promises. Sven Tore Holzeter hoped that his words about the possibility of revising cooperation with Belaruskali in December would add to the company’s rating. But in reality, these promises look like a mockery of ordinary people being tortured, imprisoned or forced to leave the country,” our response to the statement reads.

The strike committees of Belarus continue to fight for a free future. They work under the threat of being detained, being tortured, and under the threat of leaving the country. We support the striking workers and their families because many of them left the enterprises last year. And, of course, we believe that they will be able to return to the enterprises and benefit from a free Belarus.