On December 21, 1988, one of the major terrorist attacks in the history of Great Britain took place: a passenger Boeing 747-121 exploded in the air and fell on a residential block in the city of Lockerbie in Scotland. Approximately 270 people got killed. Many years later, it turned out that the Libyan special services blew up the plane: the order may have been given personally by the legendary dictator Muammar Gaddafi. On May 23, 2021, the Belarusian dictator landed a Boeing 737-8AS plane. And this incident had quick and inevitable consequences for the country. A sincere love for terrorism can be traced in many dictators, so today, we will take a little look into the past.

What happened to the Libyan dictator, we once wrote in our series of articles about those who thought they would live forever and terrorize their people forever, and sometimes the whole world, as one of the most famous dictators of the USSR — Stalin. 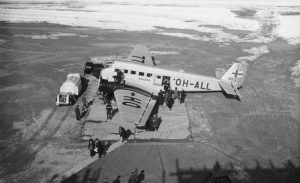 The USSR shot down in the air a Junkers Ju 52/3mge Kaleva passenger plane of the Finnish airline Aero O/Y, operating a regular flight from Tallinn to Helsinki. The incident happened three days before the Soviet troops entered Estonia. On the same day, the USSR issued an ultimatum to Lithuania, and on June 15, troops were brought in.

At that time, the USSR was finishing preparations for the operation to annex Latvia, Lithuania and Estonia, so a big Soviet military group got concentrated on the borders of the Baltic States — its number exceeded 500 thousand people.

Seven passengers got registered for the flight on June 14. An American diplomat, two German businessmen, two French diplomats, a Swedish citizen and an Estonian were there. The distance between the takeoff and landing points was 104 km, and the flight was supposed to take less than 40 minutes. At 13:54, Kaleva took off from Tallinn’s Lasnamyagi airport, and 12 minutes after takeoff, radio communication with the plane was unexpectedly interrupted. A few minutes later, the control room of the Malmi airfield (Helsinki) received a message that observation posts on the island of Santahamina saw a burning plane crashing into the waters of the Gulf of Finland — the plane crashed into the Gulf of Finland from a height of 400-500 meters at 14 hours 6 minutes.

On June 14, two DB-3T high-speed bombers from the 1st mine-torpedo Aviation Regiment (1-MTAP) patrolled the sky over the Gulf of Finland near the coast of Estonia The Air Force of the Red Banner Baltic Fleet.

Soviet pilots opened fire to kill. According to the testimony of witnesses, they saw the faces of people through the portholes. Those people whom they killed intentionally.

On June 16, 1940, the same Junkers Ju 52, en route from Helsinki to Tallinn, was fired at by an anti-aircraft machine gun of a Soviet submarine.

No official claims were ever made to the Soviet side for the incident. The Finnish government, which was following the events in Estonia, decided not to protest and not to demand compensation for damages. The USSR did not admit its responsibility and did not even offer a formal apology in connection with the death of passengers. There was no official investigation because Europe got already gripped by the tragic events of the Second World War at that moment. All the facts about how events unfolded that day were clarified much later. 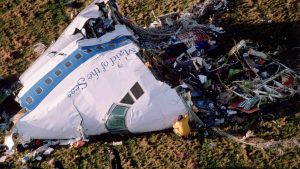 At 6:4 p.m., flight PA103 took off from London and headed for New York. At 19 hours 2 minutes, when the plane was flying over Scotland, an explosion occurred in the cargo compartment in the aircraft. The liner hull crashed into the ground at a speed of more than 800 kilometres per hour. There were 259 people on board the plane, which took off from Frankfurt to Detroit. None of them survived. 11 people died on the ground.

More than 90 tons of fuel remained in the fuel tanks. Such a powerful explosion wiped out several houses along with foundations, iron fences within a radius of 500 meters melted.

In 2011, the former secretary of the Main People’s Justice Committee of Libya, Mustafa Muhammad Abd-al-Jalil, said that he allegedly had evidence that Muammar Gaddafi personally gave the order to blow up the plane over Lockerbie. 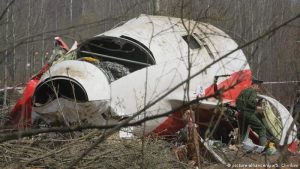 At 9:27 a.m., the presidential airliner TU-154M of the Polish Air Force (flight PLF101) took off from Poland and headed on the Warsaw — Smolensk route. At 10:41 a.m., when landing at the Smolensk airfield in conditions of heavy fog, the plane collided with trees, overturned and crashed to the ground.

All 96 people on board were killed — 88 passengers and eight crew members. Polish President Lech Kaczynski and his wife, well-known Polish politicians, almost all the high military command and public and religious figures of the Republic of Poland were also among the dead.

Initially, during the investigation, the main claim of the Polish side was a unilateral, in its opinion, approach to identifying those responsible for the crash. Without questioning the guilt of the aircraft crew, the Polish side considers one of the main reasons that the Smolensk airfield was not closed due to weather conditions, and the decision on this was made by phone by a certain general through someone who had no right to do so.

On April 25, 2018, the new Polish government subcommittee on the investigation of the Smolensk disaster published a technical report of a re-investigation of the causes of the disaster, in which an explosion in its wing before falling to the ground was named as the cause of the crash.

On April 10, 2019, the day of the 9th anniversary of the disaster, the chairman of the subcommittee on the investigation of the Smolensk plane crash, Antony Macierewicz, said on the Polskie Radio 24 that the passengers and crew members of the Tu-154M government aircraft died as an outcome of an explosion, and not hitting the ground. He referred to the results of additional expertise conducted by British experts.

On July 31, 2020, the film was presented to the Seim. In it, it was claimed that the reason for the explosion was TNT. It was put into the plane during its repair in Russia. 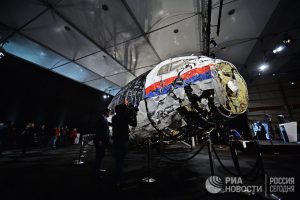 On December 20, 2021, the Dutch Prosecutor’s office began reading out an indictment in the case of the crash in Ukraine of the Malaysian Boeing (flight MH17), shot down in the sky over Donbas in 2014. The prosecutor insisted on the version that the plane was shot down by the Buk air defence system from the Pervomaisky village controlled by the militias. The prosecutor requested a life sentence for the accused.

It took more than seven years for the trial to finally take place. The catastrophe claimed the lives of 298 people.

The plane crash is blamed:

The Dutch Prosecutor’s office concluded that the Buk that shot down MH17 arrived in Donbas from Russia. But, despite repeated requests, Moscow refused to allow the investigation to interrogate the servicemen and the commander of the 53rd air defence brigade, to which, according to the prosecution, the Buk that came to Donbas belonged.

The next court session is scheduled to take place in March 2022. Three dates are booked for the announcement of the court’s decision: September 22, November 17 or December 15 next year, and the court itself is scheduled to be completed by January 2023. Russia will take all possible actions to ensure that the verdict is such as it is beneficial to it. Will it work, do you think? Or is it enough that we already know the truth? Or should the criminal, no matter how influential, be in prison? And on a global scale, if we are talking about the whole country – to get such sanctions so that its leadership will forever stop thinking that it has the right to deprive people of their lives.

What is allowed to Jupiter is not allowed to the bull? That’s probably why Lukashenka just landed the aircraft, not shot it down. He is still afraid to shoot down planes. A detailed chronicle of the terrorist act that occurred on May 23, 2021, you can read on our website.

What will happen next? The ICAO report will turn the page on the history of this aircraft — it will be the beginning of a new round of events. And we expect that they will bury the dictator. Even more, deprive him of the opportunity to profit, terrorize, as it turned out, not only Belarusians but also residents of other countries.