At the moment it is known that the flight of the Irish airline Ryanair, which flew on the route “Athens-Vilnius”, gave the emergency signal 10 minutes before landing in Vilnius, turned around and then landed in Minsk. There were 123 people on board at the time, including Protasevich, but the Lithuanian Foreign Ministry claims there were more people on board.

The reason for the signal and the emergency landing was the report of an airplane bomb (which later turned out to be false). A MIG-29 fighter aircraft is also known to have been airborne to intercept the civilian aircraft. During the second review of the documents of the aircraft’s passengers, Roman was arrested by Belarusian special services. Three hours later, there were reports that the plane was preparing to take off and passengers were undergoing passport control. People were forcibly detained for three hours in the narrow corridor in the Minsk airport building with no water, food or the opportunity to go to the toilet, their belongings were thoroughly searched with the help of service dogs.

Before boarding the plane, Protasevich managed to inform his colleagues of the interest of a Russian-speaking man who stood behind him during the check-in. This man tried to take photos of his documents. As soon as Roman had checked in for the flight, he suddenly walked away, although he was next in line. 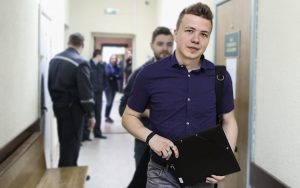 We remind you that in Belarus Roman Protasevich faces death penalty. The regime declared its activities and the activities of the Telegram channels “NEXTA” and “Belarus golownogo mozga” as “terrorist”, although these channels never called for such activities and only tried to personally provide readers with honest and neutral news about the criminal activities of the illegitimate government and the dictator Lukashenko.

On February 7, 2021, the Prosecutor General of Belarus submitted a request to the Ministry of Justice of Poland to arrest and extradite the heads of the Telegram channel “NEXTA” Stepan Putilo and Roman Protasevich.

Presumably, everything that happened was a special operation by the Belarusian Special Services and served only one purpose – the capture of Roman Protasevich. Such events are unprecedented in the modern history of Belarus.

The enforced landing of a civil airplane due to a faked notification about an act of terrorism and the start of a warplane is not only an international scandal. The civilized world is going to interpret such actions as aircraft hijacking and an act of international terrorism.

The president of Lithuania  Gitanas Nauseda gave an urgent statement, in which he urged the European Union and the NATO states to react accordingly to the situation immediately.

„I urge the NATO and the allies of the European Union to react immediately to the threat of the international civil aviation. The international community must urgently take measures in order to prevend from repitition. I will take about this tomorrow in Brussels.

The prime minister of Poland Mateusz Morawiecki  also supported the lithuanian president in his statement:

„I asked the chairman of the European Council to extend the agenda of tomorrow‘s summit and include an item about the immediate imposition of sanctions against the regime of Lukashenka. The hijacking of a civil airplane is an unprecedented act of governmantel terrorism, which may not remain without reply“. Other leaders and personalities of the international community commented on the events, too. There were statements about „the final status of a rogue state“ and that „North Korea or Iran could not allow themselves such actions“.

The interim Chargé d’Affaires of Belarus was summoned to the Lithuanian Ministry of Foreign Affairs. He was asked to immediately release all passengers and crew on the flight.

The ICCI “Our House” categorically condemns the act of international terrorism committed by the illegitimate authorities of Belarus, calls for the immediate release of Roman Protasevich and an appropriate response from all countries of the world community to which the concept of law, freedom and democracy is not alien.