On 12 June, the Russian Federation celebrates the Day of Declaration of State Sovereignty. Belarus never before celebrated that holiday, but this year, in the centre of Minsk, Russian companies organized a concert, in which famous Russian performers participated. The audience came to the event with red-green Lukashenko flags and Russian tricolours. Does it mean that the occupation of Belarus is continuing? 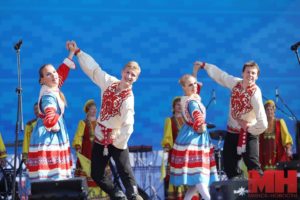 From the stage, the Russians told the audience about the common history of both countries, and quoted Lukashenko. The Russian Ambassador in Belarus, Boris Gryzlov, was at the event and said: “Today, we celebrate Russia Day in the capital of our closest neighbour and partner. I am sincerely glad that our friends and brothers are with us on this holiday. We always understand and support each other, there are no borders between us. Russia and Belarus have been close during the hardest times. During the Great Patriotic War, our united country defeated the most terrible and dangerous enemy. In unity is our strength and the guarantee of our common future”.

While Gryzlov spoke openly about unity and the union that nothing will destroy, as he put it, the Chairman of the Minsk City Executive Committee, Vladimir Kukharev, representing Belarus at the ceremony, was more cautious: “Our countries are bound with unbreakable friendship and equal cooperation covering all spheres of life – from economy, social policy, military, foreign policy interaction to simple human contacts and ties. The highest level of relations is a logical outcome of the years-long and consistent work towards the creation of the Union State”. 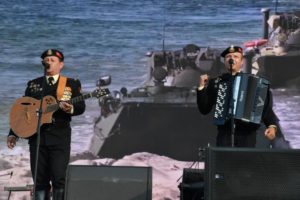 Russian bands of patriotic songs came to Belarus. Among them were the Pskov Russian Folk Chorus, the folk music ensemble of the Bryansk Regional Philharmony “Vataga”, the “Kudesy” folk group from Smolensk, the “Black Berets” marines ensemble from Kaliningrad, the “Pulse of the City” ensemble from St Petersburg. “Take care of your shores, take care of the shores of your country, take care of the coasts of Russia, the great Russia and the little Russia, hurrah!” – said a member of the Bryansk ensemble before one of the compositions.

The solo performers who took to the stage also professed their love for Belarus. The singer Oleg Gazmanov said it was the first time he was not performing in Russia on Russia Day: “Minsk is a beautiful city, I always have wonderful days when I come here. I feel great here. I have been to Belarus, I have been to Minsk dozens, hundreds of times. It is a huge honour for me to be here, not in Moscow”. 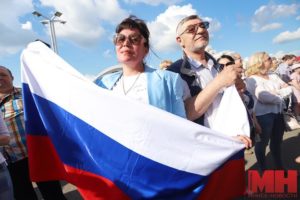 The singer Aleksander Buinov said that Belarus welcomed him warmer than “anywhere else in the world”. The singer Elena Vaenga said she saw no difference between the Belarusians and the Russians: “Whatever the holiday, you are the nation that took the first blow back then. It’s you – you had every third person killed. It must always be remembered, must always be respected and honoured. Regardless of the holiday. Thank you for inviting me, a Russian woman from St Petersburg, to this holiday. I love your people, and I love your country very much”.

Apart from that, Minsk saw performances by opera singers Alisa Fedorenko and Vasily Gerello, the pianist Yuri Rozum, the singer Sergei Rogozhin, the participant of the Russian show “The Voice” Yaroslav Dronov (SHAMAN). People heard the songs “From Volga to Yenisei”, “Young Russia is being built by men”, “Young Russia”, “Cossack’s Prayer”. 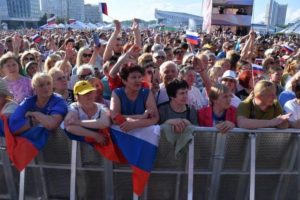 Almost all the entertainers on the list have performed in the Russian-occupied Ukrainian territories or supported the Russian aggression. Yaroslav Dronov visited Donetsk back in 2015 and sang for graduates who received “DPR” certificates. Oleg Gazmanov recently announced his plans to perform in occupied Donetsk and Luhansk. Sergey Rogozhin released a music video for the song “We the People”, dedicated to the day of 9 May, in which he supported the war in Ukraine. Elena Vaenga performed in Crimea after it was seized by Russia. The Black Berets ensemble visited the occupied Kupyansk (Kharkiv region) two weeks before the concert in Belarus.

The concert was sponsored by major Russian corporations like Gazprom, Lukoil, VTB Bank and Russian Railways. The Belarusian illegitimate regime does not appear to have been financially involved in the concert. Apparently, as in the case of the war, Lukashenko provided Belarus as a venue for the festivities. At the same time, there was an opportunity to see how many Belarusians would come to the celebration with Russian flags. The Belarusian state media wrote about the holiday, which means that Lukashenko is not against giving Belarus to Russia.

We believe that Russia Day in Minsk is another step of the occupation of Belarus by Russia. After all, our country has never celebrated that holiday before. Many people with tricolours came to the centre of the city, and that could give an impression to the Kremlin to continue the annexation of Belarus. Besides, Boris Gryzlov stressed that strength was in unity. However, most Belarusians do not want to be part of the Russian Federation, because if that is the case, our soldiers will not have the slightest chance to stay out of the war in Ukraine. We say NO to the occupation and NO to Russia on our land!