In May, we reported that the Ministry of Defense planned to purchase 20,000 metal tokens with the abbreviation “Belarusian Armed Forces”. Less than a month later, it became known that the auction was declared frustrated.

Only one participant, Open Joint Stock Company “Vitebsk instrument-making plant” (4 Gagarina str., 210026, Vitebsk, UNP: 300048171), wished to participate in the auction. The public procurement website of the Republic of Belarus is not always accessible to view, so we show screenshots of the auction.

The very fact of such an auction is alarming and may indicate that Lukashenka is preparing for military action in Ukraine. The specific relationship between Belarus and Russia makes it impossible to draw certain conclusions as to whether such an auction is the result of the agreement between the dictators or pressure on Lukashenko by Putin.

“Our House” information: A soldier’s badge is a personal badge with a number that allows for identification of a soldier, keeping numbered records and, in particular, quickly identifying killed and wounded in action, and therefore must be worn by all members of the armed forces. They are often called “post-mortem badges” because they are the only way of identifying a soldier or providing him with first aid.

All the necessary documents prepared for the auction were signed by Major General Andrei Burdyko, Deputy Minister of Defence for Logistics – Head of Logistics of the Armed Forces, including the draft contract.

Burdyko’s biography itself is quite remarkable and has a lot to do with the Russian Federation:

In 2003 he graduated from the Military Academy of Logistics and Transport of the Ministry of Defence of the Russian Federation and was appointed Head of the Food Service of the Logistics Directorate of the North-West Operational Command.

In 2012 he graduated from the Federal State Institution of Higher Professional Education “Military Academy of the General Staff of the Armed Forces of the Russian Federation” and was appointed deputy commander of the troops on logistics – head of the logistics department of the North-West Operational Command.

From 2014 to 2017, he was the Head of the Main Directorate for Planning and Coordination of Logistics – First Deputy Head of Logistics of the Armed Forces of the Republic of Belarus.

The auction documentation also describes the requirements for the badge as clearly as possible:

The badge must be made of aluminium alloy AMC in the form of a plate of rectangular shape with rounded corners, 1.5 ±0.1 mm thick. The size of the badge horizontally is 46 mm and vertically 26 mm.

Information on the front and back sides is identical.

The inscription “Military of Belarus” is stamped in the upper part, along with its series and number.

To the right of these inscriptions, there are two holes with a diameter of 4 mm each for attaching the badge at a distance of 6 mm from the edge of the badge and 12 mm between them.

There is no information available in public sources as to whether similar auctions have previously been conducted by the Ministry of Defense of the Republic of Belarus. It is worth noting that potential bidders could bid in the auction not only for domestically produced goods but also for goods from the Republic of Armenia, the Republic of Kazakhstan, the Kyrgyz Republic and even the Russian Federation. All listed countries are members of the Customs Union.

Bids for the auction were accepted until June 8, 2022, and as early as June 9, a protocol was posted recognising the procurement procedure as failed. 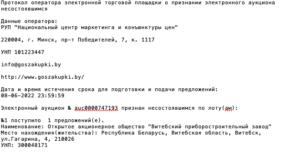 As part of the “NO means NO” campaign, “Our House” is closely monitoring the actions of the Lukashenka regime, related to the war in Ukraine. Our team hopes that these war crimes will not be forgotten, that investigations will be carried out and that those responsible at all levels will receive the punishment they deserve. But at this stage, and most importantly, support is important for those Belarusian men who deliberately refuse to participate in war crimes and flee Belarus.