The International Centre for Civil Initiatives ‘Our House’ (OH) is a non-profit Belarusian organisation, legally registered in the Czech Republic (Prague) since 2009 and in Lithuania (Vilnius) since 2014.

In January-April 2017 there were two main directions of OH work:

а) OH worked with local media activists, including amateur journalists and bloggers, and professional journalists to enhance local civil participation and to improve transparency of work of local public and civil servants, elected representatives and representatives of other state bodies;

b) OH supported women political activists and human rights defenders in protection of their rights (and of the rights of their children in cases of state oppression against them); all social campaigns organised by OH were based on the principles of non-violence and peaceful resolution of civil and social conflicts.

The mission of OH is: People of Belarus must be the true governors of their country.

One of the most important and problematic issues in the work of the nowadays civil society in Belarus is its visibility. On the one hand it is the matter of the presence of the civil society and of awareness of the Belarus’s citizens about the civil activity taking place in the country. On the other hand, Belarusian authority does its best to keep the work of the civil society in the shadow, out of the sight of its people. This invisibility is strengthened by a poor state of the independent media in Belarus that do not flourish and at the very best barely survive.

Belarusian civil society groups cannot make themselves visible to their target groups and to the general population of the country without access to channels of communication – either their own ones or somebody else’s. It is our strong believe that in current situation the new media suggest such channels of communication and allow any civil society organisation to work and to build its relations with the target groups.

Below are the results of the work of OH in the new media for January-April 2017.

OH holds a status of the YouTube partner. This status gives us some unique additional options such as, for instance, tools to organise and run online conference; the status also allows us to receive a small sum of money from YouTube for certain amount of views gathered by our video materials. In the course of January-April 2017, for instance, YouTube transferred 320€ to OH for the number of video views.

Last year OH received, as a present from YouTube, a right to organise webinars on their platform. In January-April 2017 five such webinars were produced for activists of OH; the webinars explained the principles of work in the organisation and presented some tools for advocacy campaigns. 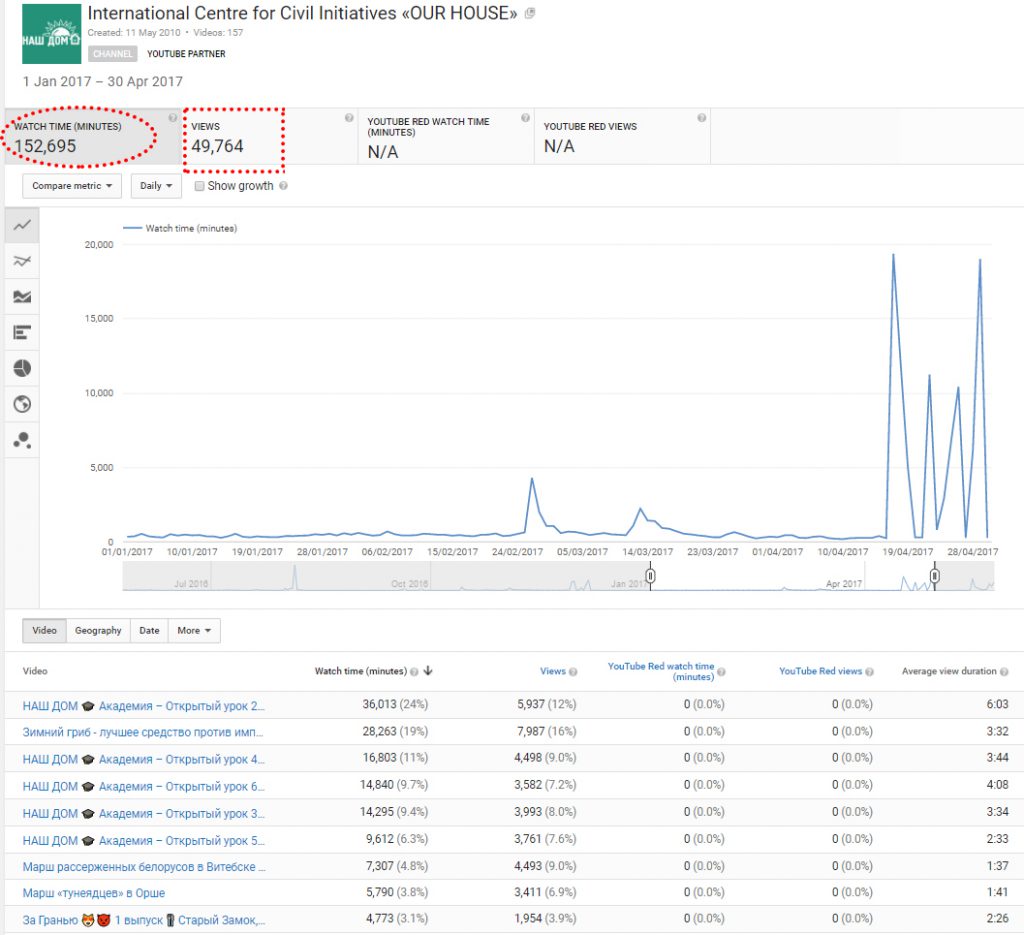 In January-April 2017 the total number of the video clips and webinars published on YouTube was 11 videos. Each video was devoted to one topic and covered either various ideas promoted by OH or explained the stand OH was taking on different issues.

In January-April 2017 OH videos were viewed 49.764 times. Each viewer watched the video clip approximately for 4.2 minutes. Thus, the total time that was spent by the YouTube users watching our YouTube channel January-April 2017 was 152.695 minutes. That means that if only one person was watching our channel it would have taken her about 4 months.

13% viewers are from Russia. 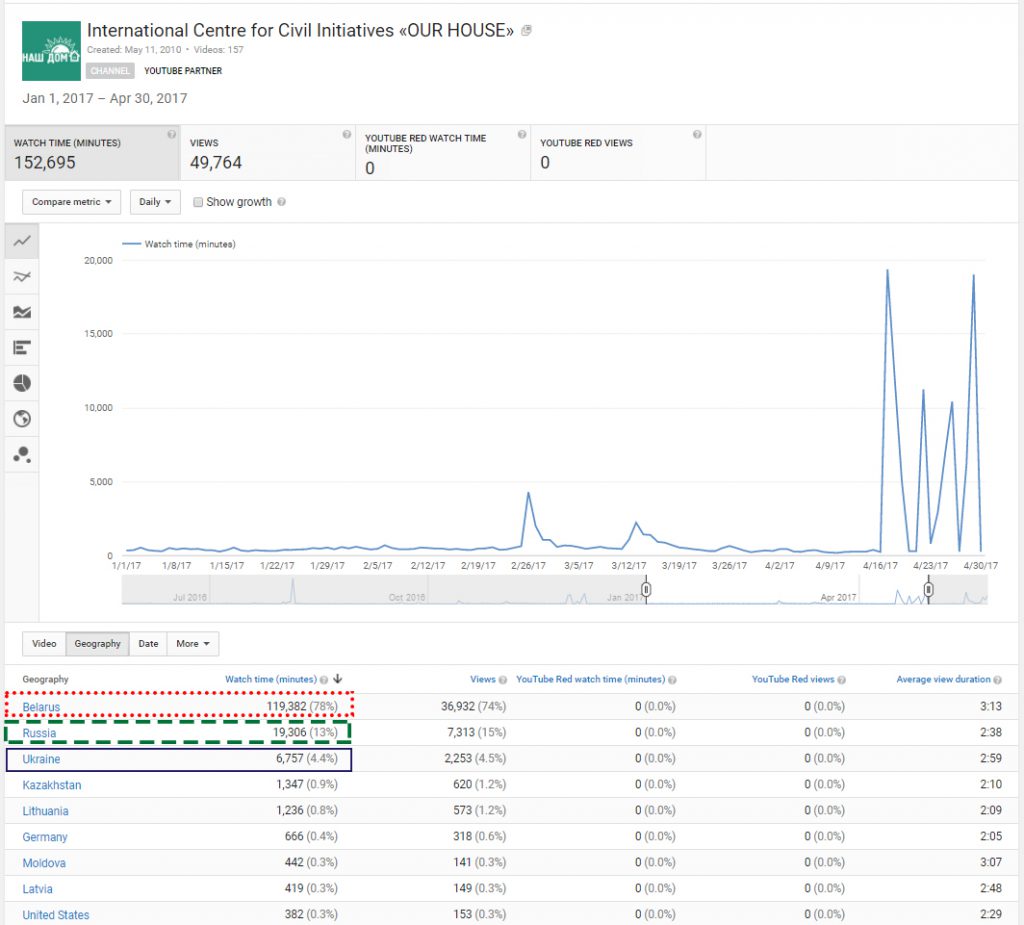 A people’s Wikipedia (Democratic Audit through Popular Control of the Government in Belarus ) devoted to the work and activity of Belarusian state officials.  This database is aimed to provide a civic monitoring and civic control over the state authorities and over the actions of concrete state officials, including publication of case studies supported by the documents covering communication activities of such officials (protocols, correspondence, claims, responses by the officials etc.). 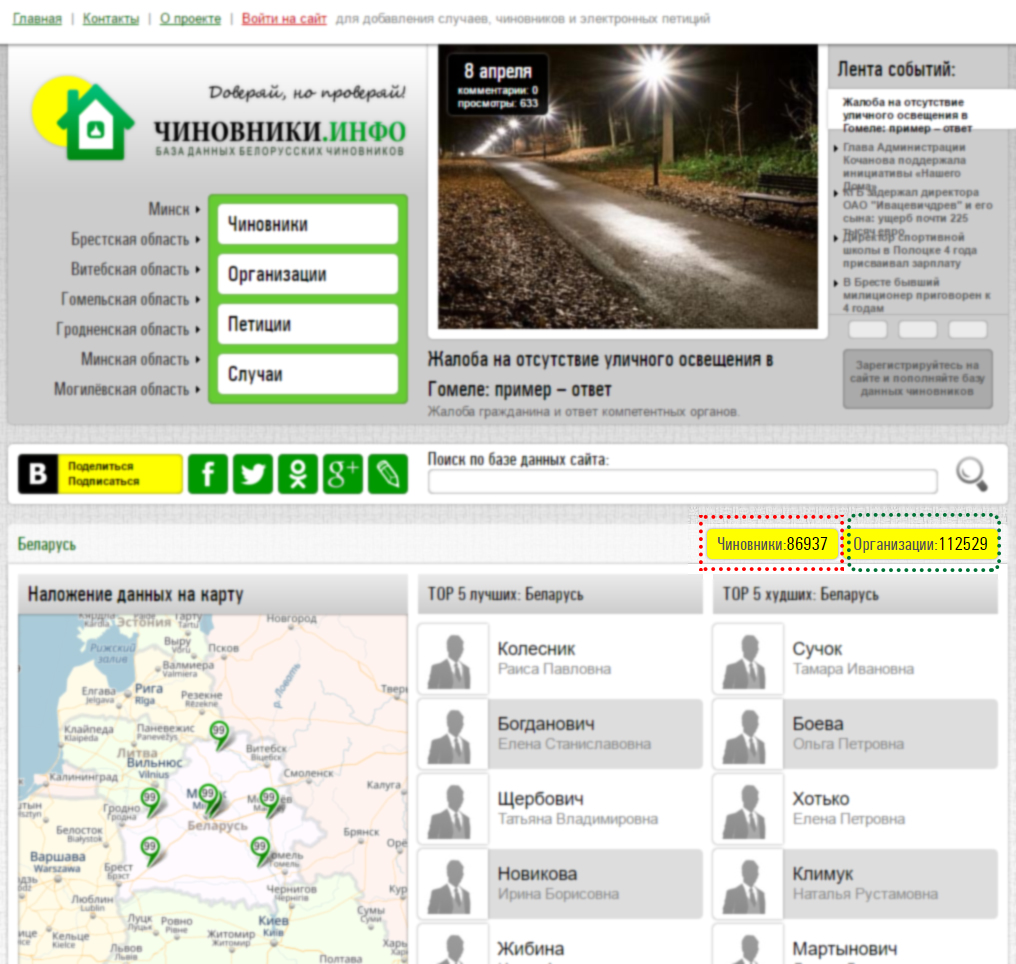 According to Google Analytics 87.512 unique users have visited chinovniki.info in January-April 2017. These users have read a total of 348.982 pages. Average time that one such user has spent on the website was over 2 minute. 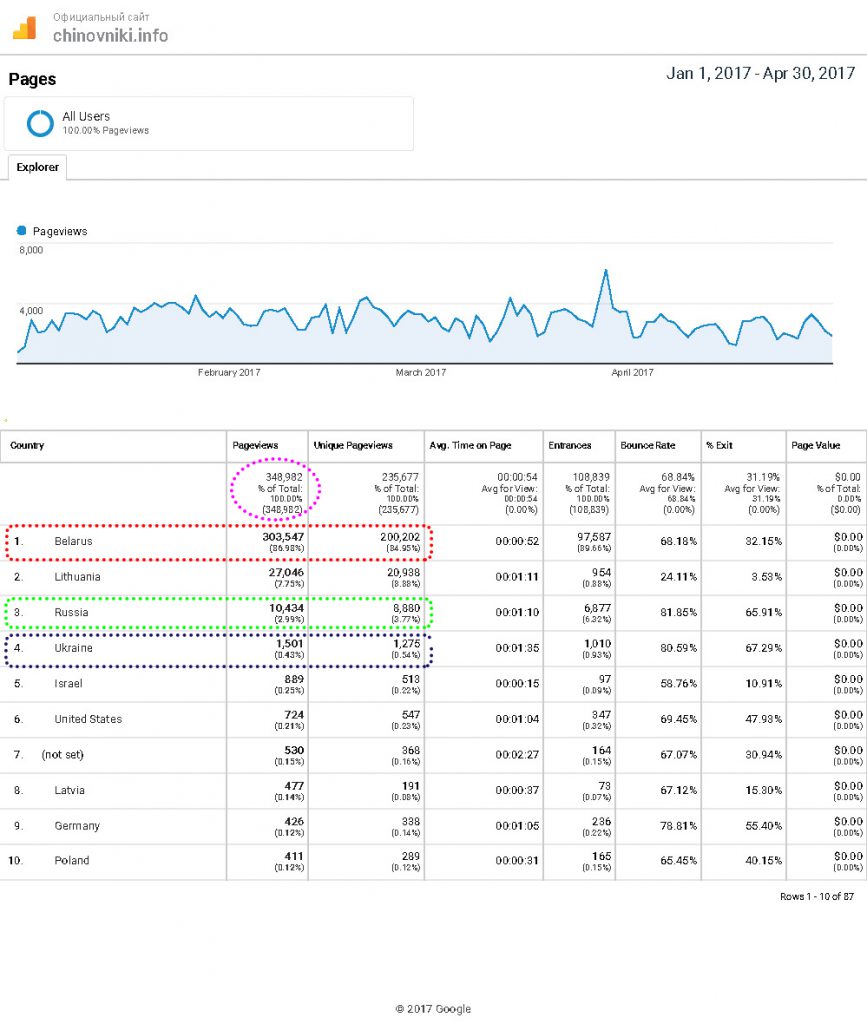 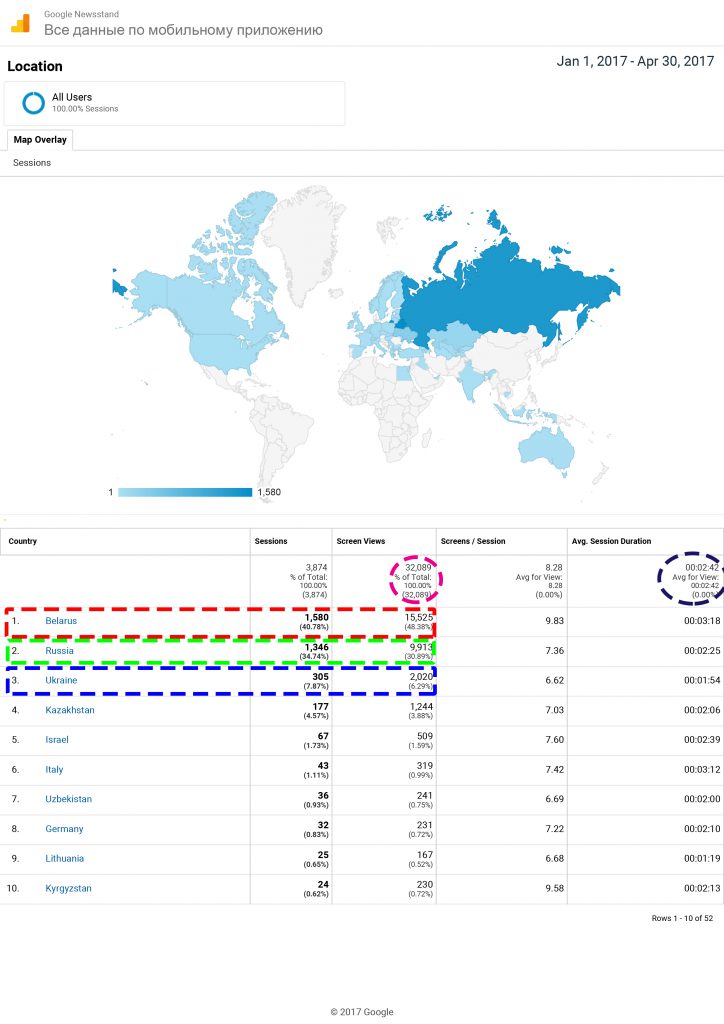 The web-site nash-dom.info is a channel of information about OH activities. The web-site was visited by 33.130 unique Internet users in the course of January-April 2017. In total 57.647 pages were opened during the year; an overage page visit lasted over 1.34 minute. 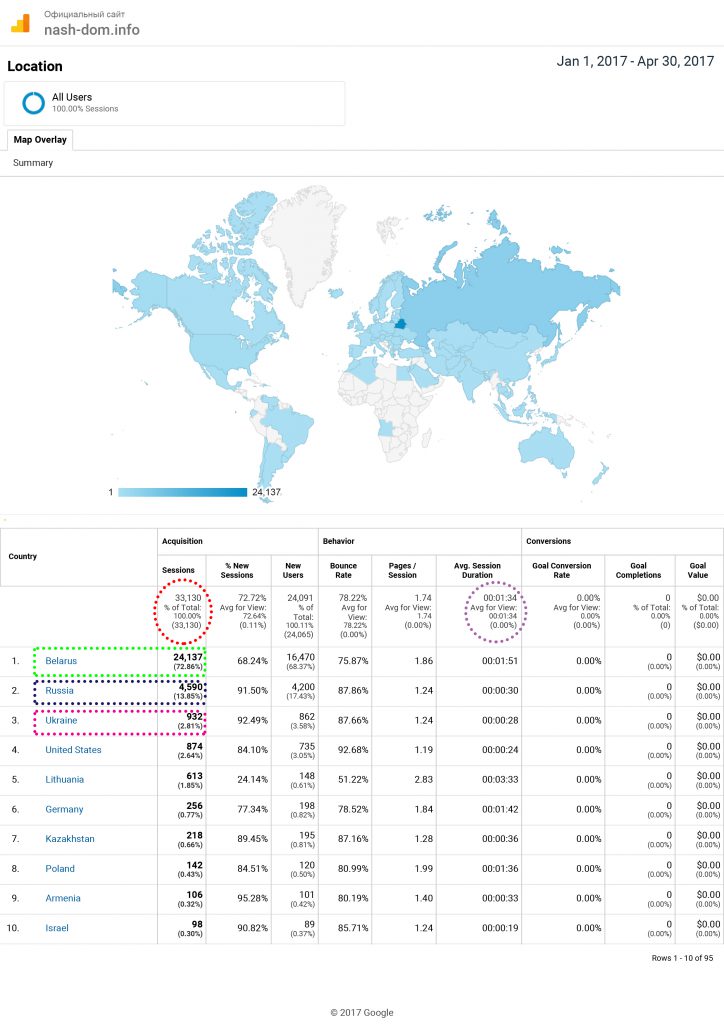 OH downloads all books and leaflets produced by the organisation as a part of our social and political activity on the Google Books. The Our House Googlebooks account is very popular with users. For example, in January-April 2017 readers downloaded the production of Our House 257.781 times.

During the mass protests taking place in Belarus against the government imposed tax for unemployment, Our House made the online campaign with the hashtag #new_hero with storytelling of usual people participated in the protest. The results of the online campaign of Our House: 5.369 “likes” and 837 re-posts of our information materials during the campaign. 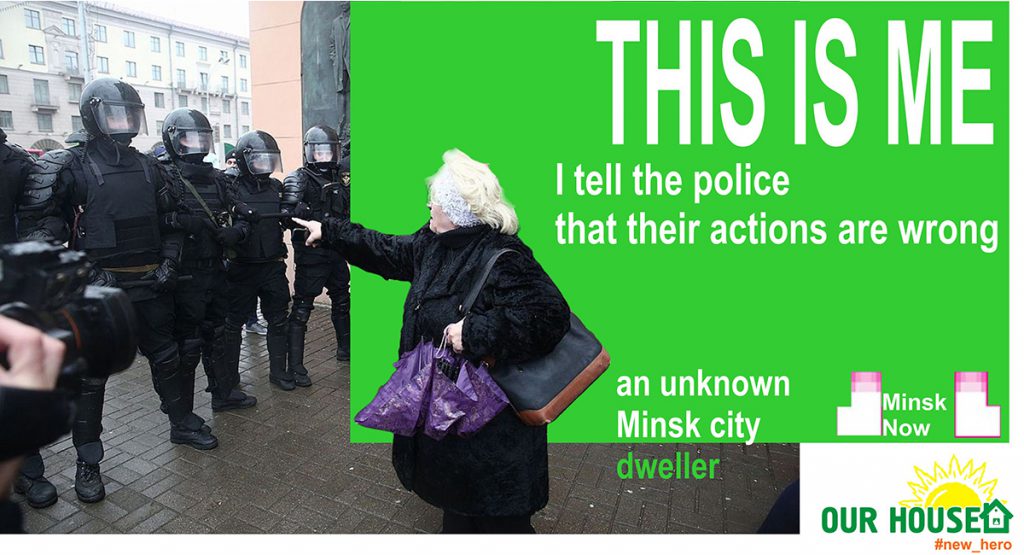 During the mass protests taking place in Belarus against the government imposed tax for unemployment, Our House made the online campaign with the hashtag #new_hero with storytelling about usual people participated in the protest. The results of the online campaign of Our House: 5.369 “likes” and 837 re-posts of our information materials during the campaign. Here is one example of the motivators. Click to image to go to full article

Summary: these numbers demonstrate that OH uses the potentials of the Internet and of the new media to work effectively with the target groups of OH. And the target groups seem to reciprocate with their attention to and interest in OH.