for alcohol and drug addicts in Belarus,

In early 2011, Belarus experienced a sharp devaluation of the Belarusian ruble and a deep economic crisis, which caused massive protests for several months. This led the Belarusian government to think about carrying out economic reforms in the country.

The Belarusian state made a bet on the maximum use of slave labour in its economic reforms and, recalling the experience of the Soviet Union, has begun to restore the GULAG in the most diverse and unexpected forms. The GULAG is the Main Directorate of Correctional Labor Camps – a division of the power structures of the Soviet Union with different names – the NKVD (People’s Commissariat for Internal Affairs) (KGB) of the USSR, the Ministry of Internal Affairs of the USSR, the Ministry of Justice of the USSR, that carried out the management of places of detention and custody in 1930-1960. GULAG used widely the free labour of prisoners, while prisoners very often died from torture, starvation, and lack of medical care, as well as inhuman conditions of detention.

Since Alexander Lukashenko focused on receiving money from the West (and he receives a lot of it), the slavery in Belarus and the active construction of the GULAG derail their relations a little with the West. Thus the Belarusian government decided to use various vulnerable social groups in Belarus as slaves and free labour, so as not to draw attention to such an activity. First and foremost, the candidates for slaves were alcohol and drug addicts, as well as children from various social groups were registered as slaves. The reason behind this is that neither children nor alcohol addicts can protect themselves and do not draw the attention of the human rights community, including due to the silence of their families and relatives and great stigma in public opinion.

It is very important to note that the Belarusian GULAG is built based on Decrees and orders of the President, i.e. this means that Alexander Lukashenko and the Belarusian government are well aware of what they are doing, and also that this is a systematic and targeted state policy. Here are some examples:

It is also important to note that the Belarusian state absolutely always covers the use of slave labour by the supposed protection of the rights of those very vulnerable groups or by fight for their rights.

Today we would like to introduce you our monitoring devoted to the so-called state CRC – compulsory rehabilitation centres, that officially contain alcohol and drug addicts, as well as those mothers whose children were taken away under Decree No. 18 and who could not pay the state for the maintenance of their children in orphanages.

At the moment in Belarus, there are 9 CRCs (compulsory rehabilitation centres) for alcohol-dependent people.

6,7 thousand people. Citizens are placed there for a year. In theory, this term can be shortened for good work and behaviour. It must be emphasized that this is not formally a prison, but the conditions there are the same as in a prison. But since it is not a prison, it’s easier to get there, and it’s more difficult to get released from there because the law is not on the side of those who happened to get there.

82% of citizens in CRC are previously convicted and, being there, they do not commit a crime. About half of those who are isolated by Decree No. 18 is required to reimburse expenses for the maintenance of their children.

The number of “treated” and centres themselves are growing: in 2012 there were 6 centres, one of which was for female; there were 1,600 detainees. Since then, these numbers have been amounted to at least 6,000 (2015) prisoners, 9 CRCs, 3 of which are for females.

For example, about 800 men undergo rehabilitation in CRC No. 7 in Mogilev every year. Authorities call this treatment or rehabilitation, but no treatment is provided there.

The Belarusian parliament regularly pays attention to slave labour, reinforcing the Presidential Decrees with its best inputs. For example, in May 2020, they considered amendments to the law on CRC, allocating 2 square meters to every CRC resident who “misbehave”. This is a kind of black humor because a grave in a cemetery calls “2 square meters” in Belarusian culture. The same discipline violators are invited to reduce their personal time from three hours to one hour.

Everyone knows now what quarantine is. So, everyone, who arrives in CRC, undergoes 14-day quarantine, and this rule has existed since 2013.

The authorities are trying to “lure” in CRC more people. The record for visits to CRCs for today belongs to a resident of Babruysk, who was placed in CRCs 16 times (and each time for one year, as we understand it). Moreover, such a person probably has never been convicted and have never been in prison. Apparently, CRC did not cure this person very well, he died during his 16th time before he reached his 60th birthday, which is the age after which you can not put him in CRC.

The guards in the CRC are very well maintained and receive many benefits. Requirements and conditions for working as a security guard in CRC are no experience is required, education is not required, they get 760 rubles, soft loans, exemption from military service, and work shift is less than twice a week.

The only region where there is no CRC is Brest, but in the Vitebsk region, there are three of them (this is a record).

Chapter number 2. People are used as slaves by the state in CRCs. 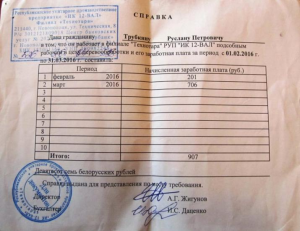 How did CRC appear in Belarus? In fact, they did not disappear, for example, CRC No. 5 is proud of the fact that it is 37 years old. They were simply standardized in 2007 and 2010. 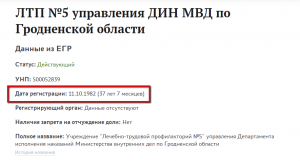 Then the Law on CRC was adopted https://kodeksy-by.com/zakon_rb_o_poryadke_i_usloviyah_napravleniya_grazhdan_v_lechebno-trudovye_profilaktorii.htm

The clarification from the Ministry of Internal Affairs on who and how gets into CRC for forced (slave) labour http://gorki.gov.by/pravovoe-reshenie-problemy-alkogolizma-napravlenie-v-ltp

And then in 2014, as a result of the implementation of Presidential Decree No. 242 of May 28, 2014 “On improving the activities of the system of penal enforcement of the Ministry of Internal Affairs”, two correctional colonies in Mogilev and Novopolotsk were liquidated and they were added to the CRC. Allegedly, this is caused by the declining number of people serving sentences in correctional colonies, but not by the number of potential workers, because later 3 CRCs will be created on the basis of two liquidated correctional colonies and branch No. 4 in Vitebsk. So that in fact, we have a classic example of state manipulation of numbers.

What happens if slave power suddenly ends in CRC?

It will never end. The Belarusian parliament takes measures in the form of adoption in the first reading, deciding to literally assign certain citizens to CRC on May 5, 2020.

What innovations are proposed to introduce? Some kind of consolidation of a new category of citizens who can be sent to CRC, as well as an increase in the terms of work in CRC from one year to two years.

At the same time, the Ministry of Internal Affairs believes that CRC has a certain rehabilitation potential (probably they mean that there will be enough work for everyone?) to separate those who want to “rehabilitate themselves”, by separating them from those who were sent for the “antisocial motives” for the first time, and to separate the first two groups from those who get to CRC for the third time (they will be given two square meters) or were in prison. At the same time, the special contingent should be divided into men and women. In fact, 6 categories of citizens will be divided into 9 CRCs. But the Ministry of Internal Affairs believes that there is enough space for everyone.

The police consider that it is necessary to work more

Taken from an interview with a police officer: “Let’s start with the fact that all this time we have been working with the aggressor. And if he does not understand that his actions are unlawful, then more serious measures are applied to him – we initiate criminal proceedings of a preventive orientation, we send them to the CRC -compulsory rehabilitation centres. But, as a rule, it does not turn out this way. On the other hand, this work is not always carried out systematically. In some areas, troublemakers are removed timely from the family. ” A preventive orientation is when a person has not committed anything, but somehow he must be sent to the CRC.

In 2015 (even before “Our House” dealt with the problem of slave labour in Belarus), the former head of the Department for the Execution of Punishments of the Ministry of Internal Affairs, police colonel – Sergei DOROSHKO (later dismissed) said: “Personally, my opinion is that the period of detention in dispensaries (centres) should be two years. … The first six months in CRC restore … labour skills. … It is also necessary to move away from such a concept as voluntary treatment – it must be compulsory, as it was during the Soviet Union. ”

And a few more of his revelations about the GULAG: “We must strategically determine the way we want to see Department for the Execution of Punishments in five years (that is, in 2020, a comment from “ Our House ”): a fragment of the GULAG or a perfect and effective European system that is quite inexpensive for the state budget.” This phrase testifies to the fact that the Ministry of Internal Affairs officers are well aware of what system they are building and what they manage.

Do you think this person is urinating on the wall? No, he is serving his vacation in a break, a list of which is drawn to his left 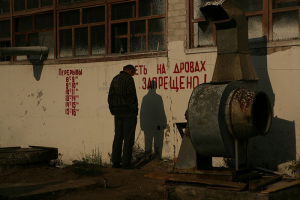 In 2016,  the authorities decided to place drug addicts (whom they could not sue http://www.moyby.com/news/219508/ ) in CRC, in addition to those imprisoned under article 328.