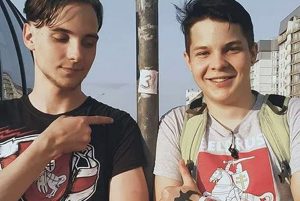 Both were sitting on a bench near the railway ticket office, about 50 meters away, drinking water. They have been detained.

Personal phones and backpacks have been checked.

Delivered to the detain center, then transferred to the police station.

As the minors point out, they did not participate in any mass event.

1) Unreasonably subjected to administrative detention for a period exceeding three hours, parents (legal representatives) were not informed about the detention, the rights of the detained minor were not explained, the opportunity to exercise their rights was not provided.

According to Art. 8.2 of the Procedural and Executive Code of the Republic of Belarus (PiKoAP):

Administrative detention of an individual is used for the following purposes:

3) identification of the person;

4) ensuring participation in the consideration of a case on an administrative offense;

5) suppression of concealment or destruction of evidence;

There were no grounds for the administrative detention of minors.

Notification of parents or persons replacing them about the detention of minors is mandatory (part 3 of article 8.2 of the Code of Administrative Offenses).

The detainee should be informed about the right to invite a defense lawyer. In addition, according to Art. 62 of the Constitution of the Republic of Belarus, everyone (including minors) has the right to legal assistance for the exercise and protection of rights and freedoms, including the right to use the assistance of lawyers and other representatives at any time.

In accordance with Art. 13 of the Law of the Republic of Belarus “On the Rights of the Child”, minors are guaranteed the right to protect their rights and legitimate interests through their legal representatives. That is, minors Gunko G. and Galko Y. should have been explained this right and given the opportunity to exercise it.

Parents were informed about the detention of minors, about the initiation of an administrative offense case against them only on August 13, 2020. At the same time, the rights and obligations of the legal representative were listed, but not explained, as required by Art. 10.6 of the Code of Administrative Offenses: Officials conducting the administrative process are obliged to explain to the participants in the administrative process their rights and ensure the possibility of exercising these rights. At the same time, they should be explained the responsibilities assigned to them and the consequences of their failure.

The requirement to unlock the phone and provide it for viewing is contrary to the guaranteed Art. 28 of the Constitution of the Republic of Belarus the right of everyone to protection from unlawful interference in his personal life, including from encroachment on the secrecy of correspondence, telephone and other messages, on honor and dignity.

It is imperative to draw up protocols of detention, personal search, seizure, inspection. This was not done.

According to Art. 26 of the Law of the Republic of Belarus “On Internal Affairs Bodies” The use of physical force, special means, weapons, military and special equipment should be preceded by a clearly expressed and obvious for the person against whom they are applied, a warning about the intention to apply them, except for cases when delay in their application will create an immediate danger to the life of citizens or may entail other grave consequences.

An employee of the internal affairs bodies uses handcuffs, rubber sticks in the case of:

repulsing an attack on employees of internal affairs bodies and other citizens;

repulsing an attack on buildings, premises, structures and (or) vehicles, regardless of their ownership, or to release captured objects;

suppression of disobedience or resistance to the legal requirements of an employee of the internal affairs bodies or other persons performing official duties or civic duty to ensure public order, prevention and suppression of crimes and administrative offenses;

detention and delivery to the internal affairs bodies of persons suspected (accused) of committing crimes, persons in respect of whom an administrative process is being conducted, if they show disobedience or resistance, as well as escorting and holding persons subject to administrative arrest, deportation or expulsion, persons detained by directly suspected of committing a crime, persons taken into custody, if they show disobedience or resistance, or there is reason to believe that they can escape or harm others or themselves;

suppression of mass riots and group violations of public order or actions aimed at damage and (or) destruction of property;

stopping a vehicle, the driver of which does not obey the lawful repeated requests of an employee of the internal affairs bodies to stop the vehicle, which are obviously obvious to him;

It is prohibited to use special means against women with visible signs of pregnancy, persons with obvious signs of disability, minors, when their age is obvious or known, with the exception of cases when these persons commit an armed or group attack or other actions that threaten the life or health of citizens. (Article 28 of the Law of the Republic of Belarus “On Internal Affairs Bodies”)

4) Have been subjected to torture, cruel, inhuman or degrading treatment.

Constitution of the Republic of Belarus, Article 25. The state guarantees freedom, inviolability, and dignity of the individual. Restriction or deprivation of personal freedom is possible in cases and in the manner prescribed by law.

No one should be subjected to torture, cruel, inhuman, or degrading treatment.

In relation to minors, actions were taken that humiliate their dignity, causing them physical and mental suffering. They were deprived of sleep, the ability to go to the toilet. They were obliged to be in an uncomfortable position on their knees for a long time with their heads lowered to the floor.

The pain and suffering of minors were caused as a result of unlawful actions of officials.

According to the Convention against Torture and Other Cruel, Inhuman or Degrading Treatment or Punishment (Entered into force for the Byelorussian SSR on June 26, 1987) No exceptional circumstances, whatever they may be, be it a state of war or a threat of war, internal political instability or any other state of emergency cannot be used as an excuse for torture.

According to the testimony of minors, during their arrest, after being taken to the temporary detention facility, the police station repeatedly used physical violence against them, threats of its use.

According to medical documents (Medical certificate dated 12.08.2020), the minor Gunko G. was found to have: hematoma of the lower leg, bruises of the chest on the left, bruises of both knee joints, bruise of the lumbar-thoracic spine.

Conclusion: in relation to minors Gunko G. and Galko Y. were violated the rights guaranteed to them by the international Convention, the Constitution of the Republic of Belarus, other domestic laws (PiKoAM, the Law on the Rights of the Child, the Law on Internal Affairs Bodies). Cruel treatment (torture) was deliberately and unlawfully applied to minors.