About a month ago, ten actors from two Hrodna theaters with families and children settled in Vilnius. During this time, with the help of the public association “Dapamoga” and the ICCI “Nash Dom”, they went through the whole course of settling down in another country: finding schools for their children and flats, learning about local services, getting used to freedom and living without fear. In our material we will tell you how the life and creative career of Belarusian actors in Lithuania is getting on. 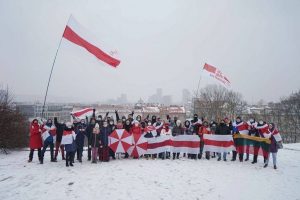 Even before the theatre goers and their families arrive, the “Dapamoga” public association has prepared a self-isolation apartment for them. A volunteer mentor was assigned to each family on 16 February. The actors were helped to fill in visa application documents and buy plane tickets, as well as take out insurance policies. Those traveling by car were provided with instructions for crossing the border. They were helped to choose among several Vilnius gymnasiums and secondary schools as a place of study for their children.

On February 17, after receiving visas, the first actors affected by the regime arrived in Vilnius: Valentina Kharitonova, Sergei Kurylenko and Maria Meleshko. On the same evening, volunteer mentors helped them buy groceries and SIM cards, get self-isolation, register for a coronavirus test, and get accounts at PaySera bank . On February 19, Anastasia Muchko joined the group – they bought a vegetarian basket of products for her, conducted a tour of online services. 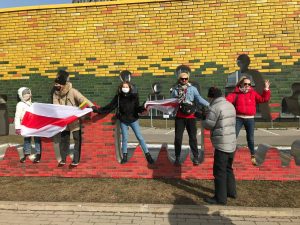 On February 20, the arrivals passed the coronavirus test, and Olga Karach came to visit them. Actors were given financial assistance. It turned out that the group needed to resolve the issue of parking spaces for cars – Valentina Kharitonova and Sergey Kurylenko received a fine for incorrect parking in the Old Town. And on February 21, negotiations began to put the car at the Russian Drama Theater.

Before the arrival of families with children, one more problem had to be solved – with the school. The Naujamiašće Secondary School was helpful.  On 18 February the head teacher of the school expressed his willingness to accept children from the family of actors Vasilije and Veronika Minic and prepared a corresponding letter. On February 22, the family was able to come to Vilnius. It turned out to be more difficult to solve the problem with the school for the eleventh grader Arseny Leonov – the son of actors Natalia and Vitaly Leonov. They found an opportunity for him to study at a Belarusian online school in Ukraine. After resolving the issue on February 22, the family, almost in full force, flew to Vilnius together with the family of actress Natella Belugina and actor Alexander Ratko. On February 24, the last of the group, Vitaly Leonov, joined them.

The first few days after arriving in Vilnius were the busiest. It was necessary to provide everyone with grocery baskets, register for a coronavirus test, familiarize them with services for delivering food and groceries to their homes, and finding housing. On February 23, relocators were visited by mentors and told about the opportunities offered by the “Red Cross”, and on February 24, electric stoves and utensils for cooking were brought to the place of self-isolation of the actors.

Fortunately, everyone tested negative for coronavirus. And as early as 25 February, the troupe was able to take its first walks at a distance of 500 metres from the self-isolation site. The actors were helped with the development of a “safe traffic scheme” for shops of different profiles. Apart from that, it’s time to look out for their own homes for each of them. On February 25, the Leonov family found an apartment next to the children’s school and negotiated with the landlords. On February 26, bills were requested to pay for the actors’ accommodation, and on February 28, the whole group received another grocery basket.

On March 1, the children began classes in schools – training programs were established, then a consultation on distance education was held. Arseny Leonov was offered to get a job in a Russian-Polish school. However, the mentors had to solve not only the issues with the arrangement and education, but also help with the purchase of a mobile phone (on February 27 this issue was discussed with Sergey Kurylenko), and to resolve conflicts in the troupe – on March 4, in this regard, they visited the Minich family.

In their first days in a foreign country, the actors needed the support of their host and were visited by Olga Karach on 1 March. On 6 March there was a meeting where they heard information about shopping chains in Lithuania, using public transport, renting cars, bicycles and electric scooters. On March 7, the actors gathered again – to congratulate the ladies on the upcoming International Women’s Day, as well as to discuss scholarships and housing rent, to determine how the 11th grader Arseny Leonov can pass exams and to which authorities can be contacted in this regard.

On March 8, after a week of searching for housing and negotiations with realtors, the Minich family and the Kurylenko family received the keys to the rented apartments, Maria Meleshko and Anastasia Muchko choose one of more than twenty options and signed contracts. A suitable accommodation was found for the Leonov family. 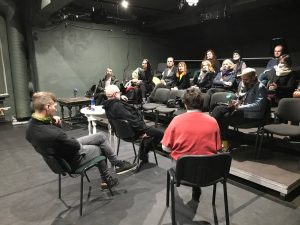 Solutions to creative issues were not left out. Even before the actors arrived in Vilnius, verbal negotiations on possible projects with a private production centre took place. On 22 February, the day the main part of the troupe arrived, a journalist from ICСI “Nash Dom” was contacted. On the same day, they began to look for contacts with the Belarusian editorial office of LRT in order to make a program about the actors within the cycle “Vilenski notebook”. On February 23, we agreed to meet with the chief director Vladimir Gurfinkel and the head of the Russian Drama Theater Olga Polevikova. The meeting took place on March 10. Having escaped the shackles of the regime, the actors themselves began to open up 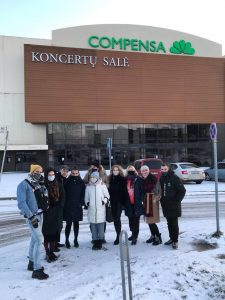 – they offered a play about executed poets and a series of stories about a neighbourhood in Old Town.

After leaving the quarantine, the troupe almost immediately got involved in creative work. On March 7, we attended the rehearsal of the performance “Tsoi” on the “Compensa” stage, where we met the director of the performance and representatives of the production center. On March 10, we met with the chief director of the Russian Drama Theater Vladimir Gurfinkel and the head of the theater Olga Polevikova, told about the plans. On 14 March a new meeting was negotiated with representatives of the theatre, already with concrete ideas and proposals.

Even far from their homeland, the actors continue to stay in touch with Belarus: they give interviews not only to the journalist of the ICCI “Nash Dom”, but also to the independent Belarusian media, and attend protest actions in Vilnius. On March 7 they took part in the March of Flowers, on March 11 – in the development of the Freedom Day program, on March 13 – in a protest action on Cathedral Square. On March 14, the troupe went to a Sunday march dedicated to the victims of the Lukashenko regime, and on March 16 – to a protest against the violation of the Constitution at the Embassy of Belarus.