For almost half a year, actors from two Grodno theaters are forced to sit without work only because, at the height of the repressions in Belarus, they refused to play comedy performances and went on strike. Thanks to the ICCI “Nash Dom” and the public association “Dapamoga”, Grodno residents were able to come to Vilnius under the program “Cultural figures under repression”. Among everyday issues and settling in a new place, they found time to get acquainted with the collective of the Russian Drama Theater. And there is hope for fruitful work. 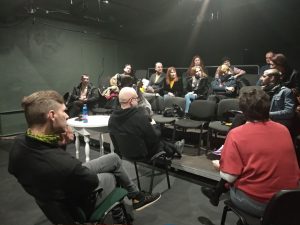 The main director Vladimir Gurfinkel and the head of the theater Olga Polevikova know firsthand about the situation in Belarus and how hard it was for the actors who showed their civic stance. In the fall of 2020, the theater staff staged a documentary drama “Breathing together”, dedicated to the events in Belarus. Nine Belarusian artists and six actors of the Lithuanian theater took part in the project. Belarusian directors Alexander Marchenko and Alexander Yanushkevich worked with the actors. Just the other day, the theater’s ensemble was nominated for the “Golden Stage Cross” for this production.

Despite the fact that the theater is now in quarantine, Vladimir Gurfinkel and Olga Polevikova were able to communicate with Belarusian actors and listen to their ideas. And Grodno residents have a great desire to create. For example, Veronika Minich, who performed on the stage of the Grodno Regional Drama Theater, admitted that she would like to show the audience through the theater what the troupe experienced in Belarus. Her colleague Anastasia Muchko proposed a version of a musical performance about the events in Belarus. And Natalya Leonova has a long-standing idea – to create a “An evening of unshot poetry” in memory of the executions of the intelligentsia in 1937:

– For a long time, the topic of the GULAG in Belarus was taboo. Only in the summer of 2020 did people begin to remember Kurapaty. This season in the theater would be a jubilee for me. Now I say that the authorities have shot my 20th season. 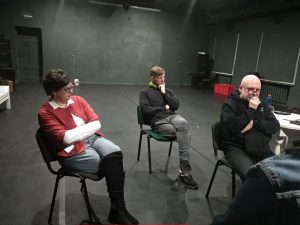 Honored Artist of Belarus Sergei Kurylenko worked as a director of the Grodno Regional Drama Theater. On the day of his arrest, September 20, the actors stopped the performance in solidarity with him. And when he announced he was joining the strike, he was fired. But in Vilnius, he is ready to prove himself as a director. His wife Valentina Kharitonova, who gave the stage almost 40 years and left after joining the strike, offers ideas:

– A play based on Istvan Erken’s The Tot Family could be put on – there was also a dictator who everyone tried to please. Or it is possible to perform excerpts from plays. The main thing is to support the people who have remained in Belarus. 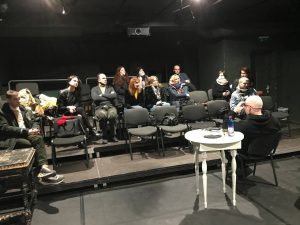 In the six months they have been out of work, the actors have discovered many talents which they can put to good use. Vitaly Leonov, a former artist of the Grodno Regional Puppet Theater, is ready to play the guitar. Maria Meleshko of the Grodno Regional Drama Theatre talked about her passion for poetry – she writes poems herself. And her stage colleague Alexander Ratko began reading about performative art. 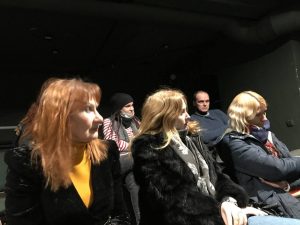 Olga Polevikova said that the fact that the product was made by Belarusian actors would tell a lot about it:

– You need to show how cool you are. Do not deny yourself anything. Of course, there is no need to repeat “Breathing together”, but you can think of something that will allow you to open up. And then we will all see how Lithuania becomes interested in Belarus. And after Lithuania Europe will catch up.

The actors have already been invited to attend the theater rehearsal and the troupe’s classes with the choreographer. They plan to organize a performance on Freedom Day on March 25 and work on a project about Vilnius. But Vladimir Gurfinkel and Olga Polevikova gave them a few more days to think of ideas for other projects. There is no doubt that Grodno residents will show themselves on the Lithuanian stage in the future.