The topic of the conversation was the problem of torture and modern slavery in places of detention in Belarus. Lithuanian public figure Valdas Bartkevicius and representative of the Belarusian yard initiatives Oleg Moiseyev also attended the meeting. 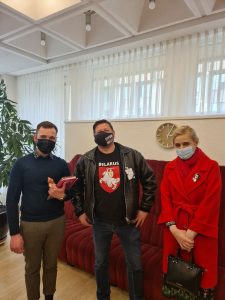 Olga Karach told Mr Raskevicius in detail about the long-term experience of the human rights centre «Our House» and about the situations that the centre’s employees faced. Mr Raskevicius got to know about teenagers sentenced under Article 328 (possession and distribution of narcotic substances) and turned into free labour for the Lukashenko regime.

«Most often, the victims of the «anti-drug» article are 16-year-old marijuana smokers who receive up to 10 years in prison. Lukashenka started the campaign of «fighting against drug addicts» in 2014, after the economic crisis of 2011-2012, which arose after the presidential elections of 2010. Lukashenka came up with the idea of carrying out several economic reforms, but under the guise of «liberal» transformations, he began building the Belarusian concentration camp. The regime organized business companies directly in prisons and began to «attract» teenagers convicted under article 328 as free labour. For slave labour, the authorities need young workers who do not need medical care. The state’s profit from such companies is $100 million a year, and the monthly salary of a working prisoner is about 5 cents», Olga Karach said. 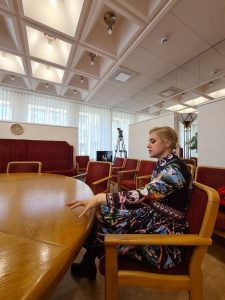 Olga Karach also told about the problems of modern slavery in medical and labour dispensaries for alcohol and drug addicts. A part of the discussion was devoted to the division of imprisoned into groups of «special treatment» for them. In particular, Mr Raskevicius got to know about the gender-motivated repressions against women in Belarus and their difference from the repressions used against men. The regime uses three types of repression against Belarusian women: economic pressure (punishment in the form of unaffordable fines), threats to take away children and pressure on family members, as well as the placement of women in psychiatric institutions (most often this practice is used against journalists, bloggers and human rights defenders).

Tomas Vytautas Raskevicius offered assistance and support to Belarusians from the Lithuanian Parliament. Olga Karach said that Lithuania could invite the world community to the situation in Belarus, especially to the problems of torture and slavery in places of detention. To do this, soon, the ICCI «Our House» will hand over to the Lithuanian Parliament all the necessary materials and data.

At the end of the meeting, the two sides also talked about Belarusian migrants and refugees in Lithuania.

Next week, Olga Karach will hold a series of meetings with representatives of the Belarusian diaspora in Vilnius to collect all the information about the problems of Belarusians in Lithuania and then pass the data to the Lithuanian Parliament.

At the request of the ICCI “Our House”, the Lithuanian government will develop a plan to simplify the relocation of Belarusian doctors

“Our House” and “Dapamoga” met with deputies of the Lithuanian Seimas. The problems of Belarusian doctors were on the agenda

Olga Karach appealed to the Lithuanian deputies with a request to name one of the streets of Vilnius in honour of Witold Ashurak
2021-04-18 at 14:28 Svetlana Gordeeva News