Initially, «Our House» was the name of a newspaper that originated in Vitebsk. In 2004, the newspaper grew into a civic campaign that brought together activists and human rights defenders from different cities and associations. The newspaper continued to exist and told about examples of the struggle for human rights. Since 2010 it has become a colourful newspaper for free distribution in the mailboxes of Belarusians. After that, the authorities arrested activists with editions and distributors. However, this did not stop «Our House» – and the campaign began publishing books: «Dictionary of consumers of housing and communal services», the youth magazine «Squot», the manual «Overhaul of a residential building» and others.

In 2009, «Our House» published an 82-page «City of N-ck» book. It is a photo album of young photographers living in the city of Novopolotsk. They united in the youth initiative «Discover Yourself». The album has collected 97 reviews on Google Books.

In 2010, a «Memo to the Policeman» was published. «Our House» got involved in the problem of rudeness and disregard for the law in the police. Based on the experience of interaction with the Ministry of Internal Affairs, activists of «Our House» have proposed a set of simple rules. The 16-page cheat sheet has collected 130 reviews on Google Books.

In 2011, Our House launched the «Beware, Police!» сampaign. It was prompted by the authorities and security officials violence against women activists in 2006-2011. Moreover, it was also expulsion from universities, dismissal from work, pressure on children and relatives, and even compulsion to commit suicide. The book «My dad is a policeman» clearly shows how the police mock women. It also contains stories of girls who have suffered from the actions of law enforcement agencies. Readers on Google Books left 524 reviews for the book. 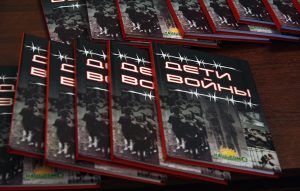 In 2012, the presentation of the book «Children of War» took place in Vitebsk. The book also appeared in the Google Books account. It includes stories of former prisoners of fascist camps and children forcibly taken to work. There is no retouching in these memories – only the truth, bitterness, pain, and the war by children eyes. Readers rated the book an average of 4.5 stars and left over 6,200 reviews.

In 2012, the «Isolation: Dreams In Jail» calendar was published. The calendar is based on photographs taken by participants in the «Caution, police» direction. The photo shows what the girls lack in prison. All the models were detained during a protest after the 2010 presidential elections. In imprisonment, the simple desires become unattainable dreams, and the former prisoners prepared a photo project that reveals the everyday side of punishment. Approximately 550 readers left feedback on the calendar in the Google Books account.

In 2014, «Our House» published a collection of anecdotes. The 108-page book has gained popularity among users and has collected 14 thousand reviews. The book contains short funny stories published in the media of Belarus over the past couple of decades. They reflect politicians and officials of our era. The book instils wisdom in evaluating some events from the popular point of view, increases optimism and confidence in the future.

In 2015, «Our House» released a colourful «Local deputy of my dreams: the obvious and the unlikely» book. The 20-page book received 578 reviews on Google Books. It begins with a fairytale about deputies, where each village elected the most intelligent and daring one who was engaged in solving local problems. Fairytale characters and animals familiar to every child tell from the pages about what a dream deputy should be, and at the end, they offer to take the first step from dream to reality.

In 2019, «Our House» has its anti-stress colouring book. Its addressees are everyone who needs support in a crisis, who wants to bring more light and positive thoughts into their lives. Everyone who has taken the colouring in their hands can create their own house where they want to live, dream, hide from storms and thunderstorms, in which they will always wait. 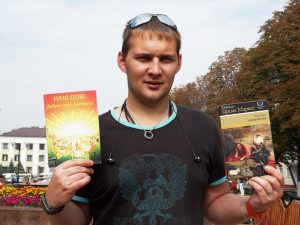 The book «Good morning, Belarus!» published on the account in the 2020 year has an exciting history. The publication first appeared in paper form in 2008. But the Committee for State Security confiscated all computer equipment, a deputy’s ID, this book and a bag of rubbish from Olga Karach’s apartment. Then Olga Karach sent a second bag of garbage to the Committee for State Security. After 12 years, the activists decided to scan one of the copies page by page. Interestingly, some of the chapters are still relevant today. Readers rated the book five stars.