While the Belarusian authorities spend money on riot police, everything else fades into the background. Including labor protection at enterprises. The factories that the country is so proud of are forced to operate with old equipment, endangering employees. And, unfortunately, there are already a lot of precedents. 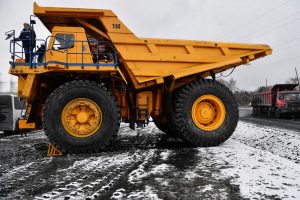 Industrial injuries and even deaths in the workplace in Belarus have always happened, but most of them were successfully hidden in order to avoid checks from ministries and higher organizations. With the advent of the Internet, it has become increasingly difficult to keep such cases secret. So, on December 1, 2007, a mining foreman, during his work shift, came to the site to control the delivery and pouring of sand into the pit. At that moment, a truck driver drove away from the pit, who did not see the master, and he fell under the left front wheel of the car.[1]

In 2008, a worker was fatally injured at one of the Gomel construction sites. He was crushed by a one and a half-ton slab, due to which he received head and spinal injuries. The deceased had only 3 months to retire.[2]

In 2009, at one of the enterprises of Mozyr, a 24-year-old turner received injuries incompatible with life when processing parts on a machine. When processing a blank in the form of a metal rod, he was wounded in the head area and died on the spot.[3]

On January 17, 2011, the tragedy took place in Loyev. At a brick factory, a 24-year-old worker was injured, having worked there for only six months. The tragedy happened during the night shift, when the guy was cleaning the mixing bunker from clay. Suddenly the equipment started to move, causing the worker to be pulled inward. The man died.[4]

On January 31, 2011, an emergency happened at the construction of a fire station in Gomel, which was carried out by the SU-139 branch of Gomelpromstroy OJSC. A crane driver, while lifting a pallet of cellular silicate blocks at a height of about 18 metres, hit the roof with the pallet, causing the blocks to collapse on the builders working below. One of them died, the second was seriously injured.[5]

On August 16, 2011, an accident occurred in Rogachev while repairing a water supply system on the territory of a branch of the Gomeloblavtotrans enterprise. A 60-year-old electrician and a 54-year-old plumber fell into a well four meters deep, where they went down while repairing a tap to shut off the central water supply. The workers had no means of protection and insurance. As a result, one of them died and the other was seriously injured.[6]

On 27 January 2012, a cattle breeder was fatally injured in the “Dvorets-Agro” farm in the Dyatlava district. This happened while unloading bales of straw at a dairy farm. The loader was used with equipment not designed for moving and unloading bulky cargo. There were strangers in the unloading zone, and the breeder herself came to the workplace drunk.[7] 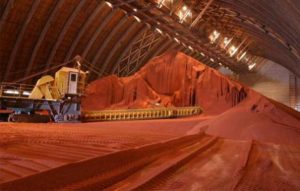 On August 26, 2012, an emergency happened at Belaruskali. A 29-year-old longwall miner was fatally injured by a metal traction winch rope. The cause of the tragedy was a violation of safety measures – the worker who turned on the winch had no right to do this, because there was a person in the danger zone.[8]

On December 26, 2012, an employee of a dairy farm died in the Pukhovichi district. He was cleaning manure near the farm and was hit on the body by the door, which was pushed by the “Amkodor” tractor under the control of a tractor driver of the same agricultural enterprise. A 48-year-old man went home and felt bad there. The ambulance did not have time to arrive – he died before her arrival.[9]

On December 21, 2014, an accident occurred in Baranovichi. A 55-year-old sorter was crushed by a press in the recyclables sorting shop of the local housing and communal services’ sorting and reloading station. The man’s body was found among the compressed cardboard.[10]

On June 23, 2016 in the group of Soligorsk in social networks they wrote about the injury of the worker of Belaruskali. An employee of the enterprise received a fracture of the leg and injuries to the face. The incident occurred due to the failure of the brakes of the equipment. From the message in the group, it became known that drivers very often complained about faulty equipment, but received the answer: there were no spare parts and money.[11] Twenty days later, another accident occurred at the enterprise – the 53-year-old mining operator was killed. According to the investigation, the cause was a violation of safety regulations.[12] 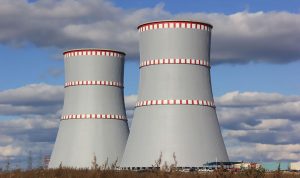 Many traumatic cases also occurred at the BelNPP. On August 26, 2016, a worker died at the construction site of the station. Death occurred due to a metal cylinder falling on a man.[13] On August 28, 2016 it became known about the death of another worker on the construction of this facility.

On October 26, 2016, a message appeared about the tragedy at Belaruskali. Six employees of a contractor, being in a construction cradle, fell from a height while climbing to the place of roofing work in one of the industrial warehouses. One of them died, three more were hospitalized. The reason was a broken cable. Prior to that, on July 12, a 53-year-old worker was killed while drilling. And in June of the same year, at one of the industrial sites during the installation of a metal structure, it fell on a 27-year-old worker. The man also died.[14]

On November 19, 2016, a 38-year-old worker of Brestenergo RUE, Baranovichi power grids, was fatally injured in the Drogichin region. He was in the field team. He was killed by an electric shock of 110 kV when he was raised to a height on an automatic lift. The Investigative Committee opened a case under Article 428 (negligence on duty).[15] During the investigation, it became known that the work was carried out without a project and a technological map. Safe production of work was not organized.[16]

On November 13, 2017, a 45-year-old crane operator was seriously injured at the Krasnoselskstroimaterialy enterprise. Prior to that, by order of his superiors, he performed duties for three years that were not provided for in the instructions. Another technical problem that he was not supposed to perform, led to the loss of an arm.[17]

On March 2, 2018, a 37-year-old worker from Pinskdrev died. The cause of death was drowning. Before that, another death occurred at the enterprise – on January 19, 2018. After that, a video appeared on the Web, where viewers were persuaded not to buy Pinskdrev’s products and questioned the quality of the products. As a result, the police began to hunt for the people in the video.[18]

On November 24, 2018, a 59-year-old bricklayer from Pinsk was killed at his workplace. The man dismantled the staircase formwork, and the formwork shield could not withstand its own weight and fell down along with the flooring on which the worker was standing. On top of the man, a fastening bolt weighing about 40 kg collapsed. As a result, the bricklayer received injuries incompatible with life. 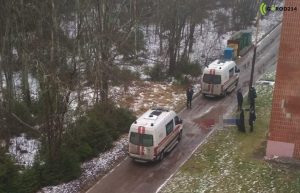 Almost three weeks later, on December 11, 2018, a tragic incident occurred near Polotsk State University. During repair work in one of the buildings, a 54-year-old worker was killed. When dismantling the stairway railings, one of the workers threw them down from the fourth floor to the ground through a window, while the other stacked them. The deceased was at the bottom and was injured by an element of the railing. He died instantaneously.[19]

On July 17, 2019, a 57-year-old employee of an organization selling building materials died in Kolodischi. During the repair of the roof of one of the warehouses, the head of the warehouse and own farm group fell from a height of about 12 meters. Work at heights was carried out in violation of safety rules, without special personal protective equipment. The victim was taken to hospital, where he died on the same day.[20] 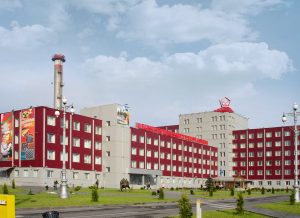 From 8 to 9 October 2019, an emergency happened at the Belarusian Metallurgical Plant. A 19-year-old steelmaker of the ladle furnace was run over by a steel carriage. The young man was injured, he was hospitalized in the district hospital. He ended up in intensive care in serious condition.[21]

On February 26, 2020 it became known about the death of a worker at Naftan. A 36-year-old man installed the pipeline. During the work, a splinter of the asphalt concrete cutter’s disk hit him in the neck. The worker was taken to the hospital where he died.[22]

On April 3, 2020, an emergency occurred at a construction site on Independence Avenue – the most important avenue of the capital. A 24-year-old worker was pumping oxygen from one cylinder to a second. At some point, a valve on one of them burst. The guy was injured. He was hospitalized.[23]

On June 10, 2020, another accident occurred at Belaruskali. A 21-year-old worker was fatally injured when the self-propelled wagon was in motion. On the morning of October 28, 2020, another employee was seriously injured at the enterprise. When installing the oil station, the hose tore off – as a result, the worker’s eye was knocked out and the base of the skull was broken. He ended up in intensive care in serious condition. He underwent a CT scan and surgery to remove his eye.[24] On November 4, 2020, another worker of Belaruskali died. Employees of the enterprise have repeatedly stated that the management does not follow safety precautions, and the equipment needs to be replaced.

On March 11, a tragic incident took place in Minsk. A reinforced concrete slab collapsed over the entrance to nursery-kindergarten No. 249, where major repairs were underway. Because of this, two workers were injured. The 46-year-old installer was killed, the 43-year-old electric welder was injured and taken to hospital.[25]

On April 5, a tragedy struck at the construction site of a 25-storey building in the “Minsk Mir” residential complex in Minsk. At the height of the 17th floor, a construction cradle fell. At this time, there were two workers in it. One fell out of the cradle and crashed to death. Colleagues helped the second builder to get out of the cradle, which hung on one cable.[26]

On April 16, an accident occurred at one of the enterprises of the Volkovysk region. A 32-year-old worker was repairing a feed chopper and at one point his leg was pulled inward. The man was taken to the hospital.[27]

We do not want accidents and tragic deaths to occur at Belarusian enterprises. While Lukashenka takes care of the military and police officers, ordinary workers have to think about themselves. We urge Belarusian workers to be careful. And in the new, democratic Belarus, labor protection and protection of people will be in the first place.