Radio Day for Belarusians is another reason to remember that the country has great difficulties with freedom of speech. The situation was not easy during all the years of Lukashenka’s rule, but it especially worsened after the last elections. Warnings, deprivation of accreditation and media status, a new law calling to clean up the information field – this is what Belarusian journalism has been going through in recent months. We will tell you how the state deals with those who write the truth.

We have already written about imprisoned journalists and bloggers, about how the authorities imprison everyone who does not agree with state politics. However, the hardest thing is for ordinary Belarusians to get information: either use media controlled by Lukashenko, or connect a VPN, as many websites of independent resources are inaccessible in Belarus.

The first days after the elections were spent in Belarus without the Internet. There was no access to the World Wide Web for over 60 hours. At the same time, the authorities said that the Internet was disconnected from abroad, and the state provider Beltelecom said that significant Internet traffic came from external IP networks, and cyber-attacks were carried out on the websites of government agencies, so there was no access to the network. Meanwhile, on August 12, 2020, the NetBlocks organization provided data on the work of the Internet during the elections in Belarus. It turned out that one day without internet cost Belarus $56,401,874.[1] 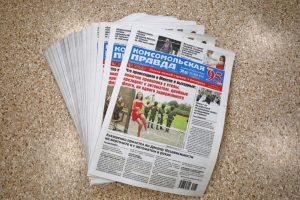 On August 18, 2020, the issue of “Komsomolskaya Pravda” was not published. The House of Press referred to a breakdown of the printing machine. This issue should have had a front-page article about Sunday’s rally at the Stella. The problems continued Thursday, August 20, 2020, when the newspaper wrote that the Grodno authorities went to meet the protesters – this time a press broke down in the House of Press. “Komsomolskaya Pravda” was not published on August 21 and August 22.[2] The editors filed claims to the Press House in accordance with the law. Since August 26, 2020, the newspaper has been published in Russia. 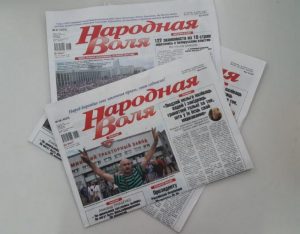 The opposition newspaper “Narodnaya Volya”, which has been out of print in Belarus since 21 August, faced similar problems. The editorial board found a printing house in Russia and began to print a newspaper in the Moscow region. Since September 6, 2020, access to the publication’s website has been restricted. And in November, “Belpochta” stopped distributing the newspaper and did not include it in the subscription catalog. On November 13, security officials raided the newspaper’s premises, confiscated the circulation, and detained the driver and two volunteer distributors. On November 17, it was decided to stop publishing the printed version of the media resource.[3]

On August 22, 2020, access to several dozen websites was blocked in Belarus, including the pages of public organizations, human rights centers, and independent media. The block included the website of the “Belsat” TV channel, the “Euroradio” media, the “Salidarnasts” internet newspaper, the “Radio Svaboda” website, the “Flagstok”, “Belarusian Prauda”, “Belarus in Focus” information portals, the “Naviny Vitsebska” regional portal and the sports portal “Tribunaby”.[4] The authorities refused to comment on their actions. Representatives of independent media were able to get to a meeting with the leadership of the Ministry of Information and a representative of the Ministry of Internal Affairs to discuss the work of the media during mass events and the problem of detention of journalists.

On August 29, 2020, a week later, it became known about the restriction of access to the portal “Naviny.by” and the website of the agency BelaPAN. No claims had been made by the Ministry of Information prior to this. The inclusion in the restricted list was also not reported. On the same day, the Interdepartmental Commission on Security in the Information Sphere revoked accreditation of journalists from several foreign media outlets: Vasily Fedosenko (Reuters), Sergey Gapon and Alexander Grebenkin (AFP), Sergey Grits and Yuri Karmanov (Associated Press), Gennady Sharipkin (RFI), Roman Vasyukovich (“Present Time”), Tatiana Melnichuk and Tatiana Yanutsevich (BBC). Paul Hanson, a Swedish photojournalist, and winner of the World Press Photo was deported from Belarus with an entry ban for five years.[5] The Belarusian Foreign Ministry did not comment on the situation. 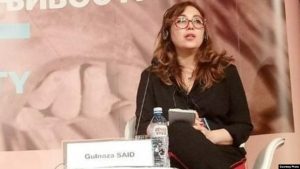 On September 15, 2020, the American Committee to Protect Journalists demanded that the Belarusian authorities stop pressure on the media. Program Coordinator for Europe and Central Asia Gulnoza Said stressed that the authorities in Belarus should “stop censorship on the Internet”, and also provide Internet resources with the opportunity “to continue informing about the protests without restrictions”.[6] 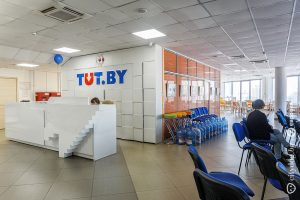 On September 18, 2020, the Ministry of Information filed a lawsuit to stop the publication of the independent online publication TUT.BY. On October 1, an order was issued by the Minister of Information Igor Lutsky, according to which the media status for TUT.BY was suspended until December 30, 2020. On December 3, by the decision of the Economic Court, the media were deprived of their media status. The reason was the materials under the following titles: “Seven times more voters and ‘secret’ protocols. What violations did the observers see and what did the CEC say? “,” The State Control Committee will be able to pay large bonuses to workers who show themselves in high-profile cases “,” The security forces came to the editor of TUT.BY. A case of mass riots was opened against her daughter” and “Belarusian customs asked to confirm that there are no calls to overthrow the government in “Harry Potter” book.”[7]

Every Sunday until December in Belarus there were local disconnections of the Internet for several hours, both in Minsk and in especially active protest regions. This cost Belarus $ 336.4 million. In total, in 2020, the Internet was absent in Belarus for 218 hours, or a little more than 9 days.[8]

On December 9, 2020, the Belarusian resource KYKY.org was blocked. Problems with the online magazine began on August 27, when the co-founder of the resource, director of the advertising agency Vondel / Hepta, Alexander Vasilevich, was arrested. On 1 September, the account of the company that owns the magazine was blocked. The reason why the publication was blocked is unknown.[9] 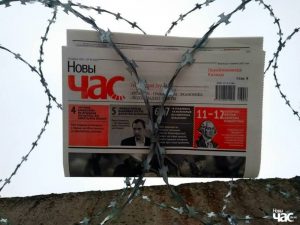 On January 14, the “Novy Chas” newspaper received a refusal to cooperate with the “Belsoyuzpechat” kiosks. Since February, the independent publication is available only by subscription. The trade department of “Belsoyuzpechat” did not explain the reason for the termination of the contract. On 25 March, the editorial board received a warning from the Ministry of Information. The ministry described the lack of dialogue between the authorities and the people, the punishment of protesters and the beating of civilians by the security forces as information that could harm the national interest.[10]

On January 19, the paper version of “Brestskaya Gazeta” was discontinued. The publication was repeatedly subscribed to for political prisoners in prison. The Brest printing house refused to renew the printing agreement with the newspaper. The editors tried to find other options, but all printing houses refused to cooperate.[11]

On March 31, the draft amendments to the law on mass media were released. According to him, journalists cannot disseminate information to discredit any of the citizens, discredit other organizations as well. Media workers may be deprived of their accreditation for disseminating “untrue information discrediting the business reputation of the organization that accredited it.” It is also proposed to prohibit the publication of the results of opinion polls relating to the socio-political situation in the country, republican referenda, presidential and parliamentary elections. The Ministry of Information will be able to deprive the status of the media, and the Interdepartmental Commission on Security in the Information Sphere will be able to block the resource. Responsibility of resource owners for the dissemination of information that may harm the state will increase. The bill proposes to expand the grounds for issuing a warning to the media and to restrict access to the media by decision of the Prosecutor General’s Office of Belarus or prosecutors of the regions and Minsk.[12] The amendments were adopted on April 2 in the first reading.

Certain changes have been made to the Law on Telecommunications. One of the clauses stipulates that the Operative Analytical Centre under the President will be able to decide to shut down the Internet in certain cases, and not only if a state of emergency has been declared in the country, as was previously the case.[13] 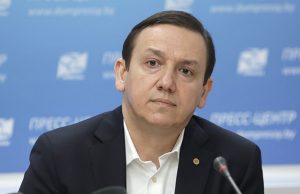 On April 5, the Minister of Information was replaced in Belarus – the former head of the “Mir” TV and Radio Company Vladimir Pertsov became the new head of the department. He promised to “dot the i’s in the media sphere” and occupy the information field with state content. On April 12, the Euronews TV channel stopped broadcasting in Belarus. The reason was violations of the legislation of Belarus on advertising, revealed by the Ministry of Antimonopoly Regulation and Trade. The channel’s editors learned about the shutdown of broadcasting in Belarus from the media. 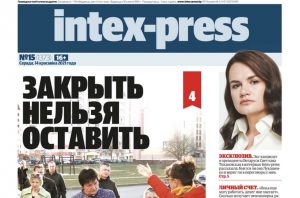 On April 28, the editorial staff of the Baranovichi independent newspaper Intex-press faced difficulties. On April 13, an interview with Svetlana Tikhanovskaya was published on the site. The authorities said it was considered extremist, and the newspaper’s editor-in-chief was fined. And 15 days later it became known that Belpochta refused to include the weekly in the subscription catalog for the second half of 2021. Several retail chains of the city refused to sell it.

We support the independent media in Belarus, as we believe that society should receive information from any angle. But while the authorities are afraid of their own people, they are afraid of dissent, the existence and development of high-quality journalism is impossible – maximum praise of Lukashenko and propaganda, and this violates the right to receive information enshrined in the Constitution. In the new Belarus, all conditions will be created so that media workers can work without fear for their own lives, and people can read and watch what they want, not what the authorities force them to.