Childhood is the smell of ripe apples, fresh milk and drying hay. Games with friends from morning to evening. Chalk-stained palms, pride in getting the best mark in your favourite subject. The first strong friendship and touching love. Cartoon characters and computer heroes…

Everyone has different associations with this most beautiful time of life. They are with us until the very end, in success and difficulties. Unfortunately, not everyone has a magnificent and carefree childhood at times. Very many people learn stupid and senseless cruelty from a very young age. The anger and harm of those who “just can”. For the sake of own goals, ambitions and plans. Adults do not care about a child’s life.

In March 2016, a boy named Mark Kravets, ten years old, was beaten by the husband of a physical education teacher Pavel Konyukh in Minsk. It happened in the courtyard of a house on Svyazisty Street in Minsk, where a child was playing with other children. The brutalized husband of the “physical teacher” attacked him with his fists. Subsequently, the Konyukh family claimed that the child was “to blame himself”: he allegedly rang the doorbell of their apartment and ran away.

On September 11, 2018, the director of secondary school No. 18 in Minsk, Fyodor Radion, caused pain and bodily injuries to two pupils of the neighbouring school No. 10. He pushed two boys with their foreheads for skateboarding on the school porch. For this crime, Rodion got off with a fine of 15 b.v. 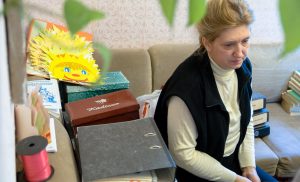 On September 12, 2019, a loud scandal broke out in Gomel, which painfully affected the reputation of the Belarusian education system. One of the children filmed on a mobile phone the behaviour of the “teacher” Lyudmila Chetvertkova, who screamed obscenities to the child. In particular, there was a promise that he would “come to an end” and the promise that he would be “carried to the cemetery”. After that, many changes were among the local and republican authorities. Lyudmila Chetvertkova was first dismissed, and then, by the will of Lukashenka, returned to her place. The pupil was sent to the inspectorate for juvenile affairs, and the schools tried to renew the ban on mobile phones. The dictator then expressed that “if I were a teacher, I would turn this puppy’s head away.” Thus, he gave carte blanche to the bullying of certain teachers over children in schools.

On January 29, 2020, in Gomel Gymnasium No. 71, another “teacher” of primary classes beat one of the pupils, so much so that he had to be stitched. Parents of other children reported that this “teacher” has physically abused children.

On November 30, 2020, a physical education teacher of secondary school No. 12 in Baranovichi hit a minor pupil in the groin area. The child received a closed injury to the right half of the scrotum with a rupture of the right testicle, a rupture hematoma. The reason for everything was an electronic cigarette that a schoolboy smoked. The teacher was sentenced to restriction of freedom for 2.5 years without being sent to a correctional institution.

On January 18, 2021, in Chechersk, a teacher hit a 6th-grade pupil with his head on the desk. The child was hospitalized, doctors diagnosed him with a closed craniocerebral injury and a bruised forehead. Now the boy often has a headache, and he had to give up sports and start visiting a neurologist. The prosecutor’s office did not initiate a criminal case against the teacher.

On August 9, 2021, during a friendly hockey match among teams born in 2008, the head coach of one of the squads hit a player with a stick. The Belarusian Ice Hockey Federation said that they promise to explore the incident. The game video was removed from public access. 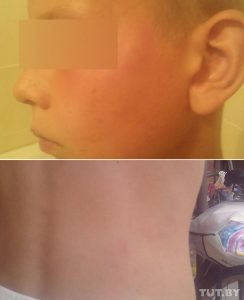 On July 12, 2016, 9-year-old Vlad Polkhovsky was beaten by Vadim Prilutsky, a senior inspector of law enforcement and prevention of the Stolinsky District police Department, in the working village of Rechitsa. After that, the child stayed in the hospital for about a month. However, after the boy’s parents appealed to the police department, the werewolf accused the boy he had beaten of beating his son.

The inspectorate for juvenile affairs of the Stolin District Police Department accused Vlad of Article 153 of the Criminal Code (intentional infliction of light bodily injury) and put him on preventive registration in the Department of Internal Affairs.

Only after the public outcry caused by this egregious case, on February 27, 2017, the inspectorate for juvenile affairs of the Stolin District Police Department decided that there was no crime in the actions of Vlad Polkhovsky. And the senior inspector of law enforcement and prevention of the Stolinsky district police Department, Vadim Prilutsky, who was engaged in physical abuse, was dismissed under the article.

Long before maturity, Belarusian children begin understanding who is the head of the country and how he can spoil their future. That is why a lot of children took part in protests and support. The illegitimate government cruelly took revenge on them for this.

On August 12, 2020, a sixteen-year-old Minsk resident Timur M. was going to a friend’s house. He left the flat but did not reach his friend. The family rushed to find their son, and on August 13, Timur’s mother, Tatyana, received a call from the school where he studied. She was informed that her son was in the hospital. He was taken there in a coma from the Partisanski police department of Minsk.

Sixteen-year-old Mikita Zalatarou from Gomel became a victim of a political provocation by the security forces and was illegally and unsubstantiated sentenced to a long term. They came to his home early in the morning on August 11, 2020, accusing him of “throwing a molotov cocktail in the direction of the police at a protest rally”, after which he was placed in a pre-trial detention centre. Here, the child was beaten with a stun gun, deprived of medicines that he needs to take constantly because of a chronic illness. To date, Mikita Zalatarou has been recognized as a political prisoner. 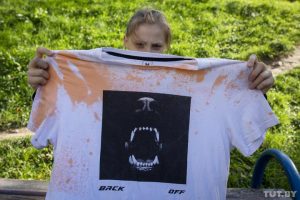 In Grodno, on October 7, 2020, security forces dragged a thirteen-year-old girl along the ground and gassed her. It all happened because her father “disrespectfully spoke to the riot police” at the protest. “The T-shirt is white, and everything orange is, we believe, traces of gas. Her whole face and chest were as if burned, reddened and burned. She wrote to me that everything burns,” the child’s mother said.

On August 11, 2020, sixteen-year-old Nikita Sidorovich, with two friends, was detained, beaten and marked with a green colour.

On September 27, 2020, in Molodechno, a teacher, who was a fan of Lukashenka, locked three-year-old Lesha Rogov in the toilet for the entire time of the “quiet hour” for the fact that the child repeated the slogan “Lukashenka – to the paddy wagon!” heard somewhere. Later, Alyosha’s parents heard how the teacher and the head conspired to deny the case of bullying the baby.

On March 29, 13-year-old Evgenia Vorochkova did not return home from a walk. Her mother started calling her daughter on her mobile, but the investigator spoke to her on the phone, who said that the girl had been detained. It turned out that while walking with friends, the schoolgirl wrote the word “LIVE” with a spray can of paint on the footpath. The policemen standing nearby took her and two other teenagers with whom she was. The mother was not allowed to be present at Eugenia’s interrogation. The 13-year-old girl spent about two hours alone in the police station.

Looking at all these nightmarish and inhuman cases of bullying and violence against children, we can draw the only conclusion: the dictator will stop at nothing and will sweep away anyone who tries to throw him off the throne from his path. For him, nothing is sacred, especially if we are talking about such a “trifle” as a happy childhood. Whether we will allow it or not is an open question. We are talking about the best time for our children and the happiness of the future of Belarus.