On June 1, the whole world celebrates International Children’s Day. This holiday is also celebrated in Belarus – although our country has been long and repeatedly violating the rights of a child. Several inhumane decrees and edicts against children are in force in Belarus.

In 2006, Belarus adopted Decree No. 18, “On Additional Measures for State Protection of Children in Dysfunctional Families”. According to it, if a child is in a socially dangerous position in a family, he or she will be taken away to a children’s home. However, the socially dangerous situation is not only alcoholic parents. The reason for taking a child away can be lack of repair in the house, low income of the parents (especially in rural areas), arrears on utility bills, domestic violence, death of one of the parents or active civic stance of the mother or the father. There have been cases of removal of children from families that were on the waiting list for housing improvements: thus, the regime deprived them of their right to get new houses or flats and made that impossible.

The decree allows the state to charge the parents for keeping their children in a children’s home. However, where can people get the money if they cannot even afford to pay the utility bills because there are no well-paid jobs where they live? Instead of helping families in a difficult economic situation, the illegitimate regime takes children to orphanages, inducing enormous psychological trauma and aggravating the situation even more.

In addition, Decree No. 18 gave the regime the right to pressure opposition journalists, human rights defenders and civic activists giving them an impossible choice: either they stop their activity, or their children will be taken away from them. On September 14, 2020, the Prosecutor General’s Office of Belarus threatened to remove children from their families in case they were taken to the protests by the parents. In 2021, the Prosecutor General’s Office wanted to change the legislation on the socially dangerous situation of children to make it possible to go after politically active families. Fortunately, for now that discussion is not active.

Another cruel decree is Decree No. 6, “On urgent measures to combat illicit drug trafficking” that was signed in December, 2014. The decree changed the minimal age of criminal responsibility for drug-related offences and decreased it to the age of 14. That was immediately followed by harsh sentences for teenagers, who were sentenced to 8, 10 or more years for having small doses of the drug found in their possession. Despite committing a minor drug-related offence or even nothing at all, they were charged with organizing a criminal group to distribute drugs and received a more severe punishment. In prisons, such children remain alone, supported only by family and friends. Later the information about torture and violations of their rights came to light: for example, children-328 are not allowed to pass their final exams with the excuse of lack of regulations in the Education Code, and to continue their education. After the pre-trial detention facility and the trial, a colony with low-quality food, slave labour, restrictions on phone calls and family visits awaits them.

Since last year Belarusians have been hearing about the trials of teenagers right within the walls of their educational institutions. Kids get sentenced under Article 328 of the Criminal Code in front of teachers, friends and then taken out of the assembly halls in handcuffs. There is at least one known case of a child detained at high school in December 2021. About 70 teenagers watched the police violate the teenager’s rights: the detention was carried out without a lawyer, also the 17-year-old was immediately handcuffed (which is prohibited by the Convention on the Rights of the Child). Even later the lawyer was not provided for the detained teenager, and no one informed his parents about their son’s detention.

Finally, as we have told you earlier, amendments to the law “On the Fundamentals of the System of Prevention of Child Neglect and Juvenile Delinquency” were introduced. The police will now monitor juveniles who commit acts dangerous to society. These include intentional infliction of bodily harm, drunken driving, disobedience to officials, and violation of the order of organizing or holding mass events. In addition, the law will allow placing children in specialized closed educational institutions if the children have committed administrative offences and were subjected to preventive measures at least four times in a year.

How was International Children’s Day celebrated in Belarus?

Trying to make a parade of their concern for children, the officials organized celebrations across the country for children in orphanages, children’s homes and closed specialized institutions. They were joined by the regime’s enforcers, the Emergencies Ministry and students from the Academy of the Ministry of the Interior. Naturally, children’s festivities turned into propaganda. For example, the Belarusian Ministry of Education and the Belarusian Children’s Fund held the “Peaceful Land of Childhood” festival in Minsk. More than 300 children from all over the country were brought to participate here. They were orphans, pupils of foster and adoptive families, winners of school Olympiads and excellent pupils. The audience laid flowers at the “Minsk – Hero City” memorial. Deputy Chairman of the Standing Committee on Human Rights, National Relations and Mass Media of the House of Representatives, Valentina Razhanets, said: “We are lucky to live in such a bright and beautiful Belarus, where the world of childhood is guarded with such reverence, and all conditions are created for every child to fulfill their potential and develop their talents”. 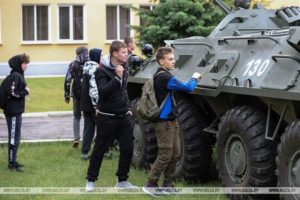 In Brest and Vitebsk, the holiday had a military touch. In Brest, a children’s sports and patriotic camp started operating on the territory of the 38th Separate Guards Airborne Assault Brigade. Pupils of Brest and Brest Region schools will spend one day in the barracks conditions of paratroopers, get acquainted with standard small arms and military equipment, learn configuration of parachutes and how to provide first aid in field conditions. In Vitebsk, 10th graders visited the military unit 3214, where they were acquainted with military equipment, assembly and disassembly of weapons, rules of hand-to-hand combat and chemical protection.

The pupils of the Petrikov state light industry training school of closed type No.1 also received congratulations. Representatives of the Council of the Republic came to visit them. The imprisoned girls gave a concert for the officials, then the school hosted a sweet meal, and in the end each pupil got a gift set.

The Belarusian Union of Women organized a holiday for the kids in the orphanage in Homel correctional facility No. 4. Juvenile girls serving time in the colony prepared a theatrical performance for the inmates, for which they had designed and created costumes and decorations. The head of the Main Department for Ideological Work and Youth Affairs of the Minsk City Executive Committee, Olga Chemodanova, visited the celebration and said: “We always say that there are no someone else’s children. All children are ours. We, adults, do everything to ensure that all children develop well. Today, there are all conditions in our country for every child to receive health care and education. Also, they can subsequently get a profession of their choice. All conditions have been created for them, no matter where they are.”

Officials are vying with one another on the regime’s media talking about their concern for children, opening children’s hospitals and clinics as a showcase for their work. However, they are silent about the most significant thing – children in prisons, illegally detained, children announced to be in socially dangerous situations and taken to children’s homes, and, finally, child political prisoners, who are not mentioned at all; for the illegitimate regime they just do not exist. Nevertheless, we, ordinary Belarusians, will always remember about them and do everything to support and to set them free.