Slave labour in Belarus flourishes not only in prisons, OTC and specific technical institutions, as we have already written about more than once. Often, pupils and high school students are selected for construction, landscaping, and agricultural work. The authorities say you can feel the work with your hands, and you can earn money. However, construction teams, which the state propaganda is so proud of, often turn into real problems: financial, with studies, and with health. 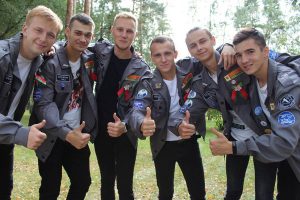 This summer, about 19.5 thousand children worked in student groups. Among them – almost 9 thousand minors. Students improve monuments, work on construction sites, collect apples and strawberries. Future doctors can try themselves as junior medical personnel, future teachers – as counsellors in children’s camps. There are also student service teams working in the hotel industry. Recruiting takes place through the Belarusian Republican Youth Union – a student organization supported by the state. Students who want to break away from their parents and have a personal income join the labour landing.

Work in the student teams begins at the end of June, and the results of the labour semester are summed up in October. Young Belarusians can get into the labour squad starting from the age of 14. To do this, they need to present a passport, a job referral from the employment service, a certificate from the place of study, a certificate from the place of work of parents, a written consent from one of them, a job application. From the age of 16, parental consent is no longer required. And from the age of 18, students can be involved in hard work, in work with harmful or dangerous conditions, in underground mining, work at night, on public holidays and weekends. Moreover, they are promised the same salary as specialists with work experience and the necessary qualifications. 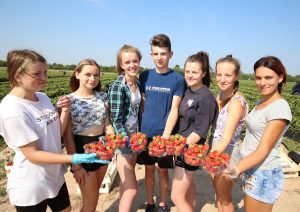 What state propaganda and authorities hide behind the underside of working in student teams? Agricultural teams of secondary school No. 2 Shchuchin this summer collected strawberries on the plantations of one of the farms. About 130 people, including schoolchildren, were involved in harvesting berries on 13 hectares. They promised to schoolchildren earnings of 170-200 euros for a month. Some guys got into the squad for the third time – that is, their first summer on strawberries was at the age of 14.

We should note that in July, the temperature in Belarus repeatedly rose above 30 degrees. In the photos to the text, schoolchildren work on a hot day without hats, which means they risk getting heatstroke and sunburn – has the employer thought about this? The material does not say how many hours the students’ work lasts – but according to the law, children from 14 to 16 years can work no more than 4 hours and 36 minutes. College students also go to student groups for the summer. On average, they are from 16 to 18 years old. They can already work without the permission of their parents, but no more than 7 hours. Last year, students of the Minsk Vocational Technical College of Baking had the opportunity to earn extra money at the bakery. “I signed up for a student team to earn money. I expect to receive 400 rubles (136 euros),” one of the participants said. By the way, the average salary in Belarus in August 2020 reached 434 euros. 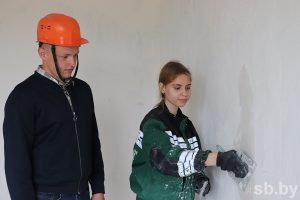 And here is another material from the state propaganda: a minor girl, a student of the polytechnic college, works on the construction of a new high-rise building in the regional centre. Admits: since childhood, she dreamed of becoming a builder, like her dad. In the photos, she poses with a spatula in her hands. No one made sure that she put her hair back, took off her jewellery and put on a helmet. According to the Rules on Labour protection during construction work, everyone on the construction site must wear protective helmets and personal protective equipment. Without this, builders may not be allowed to work. Note that the master of the plot next to the girl just put on a helmet.

Student groups have repeatedly taken up positions at various enterprises of the country. Students are told: even for a reduced working day, they can get as much as an ordinary adult worker of an enterprise. At the Atlant plant, young people could get less than 750 rubles (255 euros). We analyzed vacancies at the enterprise in the open access and determined that the average salary is 988 rubles (336 euros). The state uses students because of the cheaper cost of labour. 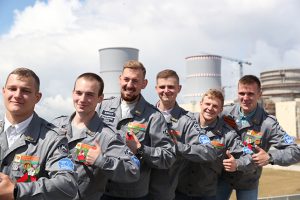 Students were even involved in the construction of the Belarusian NPP, where every mistake can later cost their lives. The nuclear power plant was even declared an All-Belarusian youth construction site. In 2014, 210 members of student detachments worked here. In 2016, 420 students were at the facility, and in 2019 – about 300 young people. Even the loading of nuclear fuel at the Belarusian NPP in August 2020 did not interfere with their work. At least one construction team of the Yanka Kupala Grodno State University worked there. And several dozen of Russian students come to help Belarusians work in the neighbourhood with nuclear fuel. The state endangers not only its citizens but also strangers. 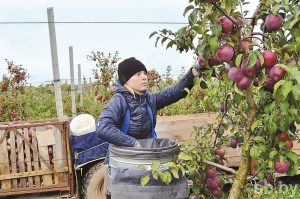 At the beginning of the school year, the work of schoolchildren and students (voluntary-compulsory, of course) does not stop, despite lessons and university lectures. In 2018, future teachers, psychologists, museologists and teachers from the P. M. Masherov Vitebsk State University spent the first two months of their studies in the apple orchards of the Tolochin district. The work here was in full swing from 8.00 to 17.00. Even on weekends, students went out for shifts. Forced gardeners had to live in the building of the machine and tractor base of the Tolochin cannery and the sports and recreation camp “Niva”. Only those whose health does not allow them to work physically could stay at the university and attend classes.

“Living conditions are not the best: it’s cold in the residential building, sometimes there is no hot water in the shower, but we are used to it, ” one of the students recalled. According to the representative of the Tolochin cannery, it was possible to get up to 400 rubles (136 euros).

The same practice is common for other Belarusian universities. Students of the Vitebsk Academy of Veterinary Medicine also go to help farms. Students of the Belarusian State Agrarian and Technical University have repeatedly become an aid in harvesting. The head of the department of educational work with young people of BSATU, Tatyana Vashchaeva, did not even hide: “Students in rural farms are welcome: these are additional workers, which farmers especially need during the harvest.” And students of the Belarusian State Agricultural Academy have a break in their studies in the spring when they go to enterprises to participate in the sowing campaign. For the sake of slave labour for a small salary, the guys must lose their classes. 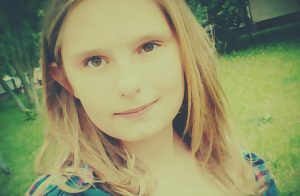 And if it were limited only to skipping lectures and seminars. There are frequent cases of injuries at enterprises and farms. The most famous example is 13-year-old Victoria Popchenya from Molodechno, whose life was cut short in the “Vostok-Agro” area during harvesting potatoes in 2016. The girl did not discern how a truck loaded with potatoes was moving in reverse across the field. The teachers accompanying the children did not notice anything either. No one conducted safety instructions with children in schools, and children were allowed to disperse to different parts of the field. Only a classmate of the girl said about the incident with Victoria.

It turned out that on that day, the tenth-grade pupils had to go to help in harvesting potatoes because it is forbidden to involve children under 14 in such work. At the last moment, the administration decided to replace the high school students with younger students, but no one called the parents of the children and asked for permission to travel. In addition, Victoria had hearing loss, because of which she could not hear the truck approaching.

In June 2018, a schoolboy got injured at the enterprise in Ivatsevichi district due to non-compliance with safety regulations. He was found near a vibropress installation with serious injuries. It turned out that he was allowed to work without signing an employment contract, training and instruction. A 16-year-old boy was in intensive care.

Since childhood, young Belarusians have been taught that work is essential. It is emphasized in the school curriculum, in the novels studied in literature lessons. Unscrupulous adults who want to save money for salaries are willing to use the desire of children to be independent and earn their first money. Often, schoolchildren and students are even intimidated, forced to go to student detachments and to the aid of farms to fulfil the norms ordered by the district executive committees and save careers of adult men and women. However, how many of them are ready to be responsible for the consequences for the health and life of innocent children – victims of the negligent attitude of teachers and teachers?