Our pupils go to lessons not only to gain knowledge and develop in different directions. Often they participate in cleaning the school and the city territory, planting trees, clearing forests. It is impossible to refuse these labour duties – teachers threaten the child or his parents, manipulate, put pressure on pity and give bad grades. The state covers child slavery with an ideology without thinking that it has already ended in an accident. On the European Day against Human Trafficking, we are launching a series of materials about slavery and human trafficking in Belarus. The first material is dedicated to free child labour.

A school student gets into servitude with the first call, especially if he studies in the countryside. Schools in Belarusian villages have their private plots – children grow vegetables, fruits and flowers themselves. Village schools are particularly concerned about financing because rural salaries are lower than urban ones – only 400-600 rubles – which means that parents will not help the school. Therefore, children have to work on an equal basis with adults: work in the fields, process seedlings, pick apples. For example, in the Klyastitsy school of the Rossony district, students grow cabbage on their own, thereby earning a living. Sounds wild and hard to believe? Here is a quote from the material about the school in the state newspaper: “All the vegetables on the lunch tables of students are from the school’s backyard, apples are from their garden.” 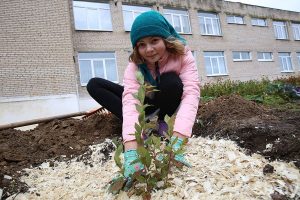 In the Lyady school, Cherven district, hard work is not a surprise even for first-graders. The state publication writes with delight: “Here they teach to love the earth and not be shy of labour corns. All 57 students, from young to old, grow cabbage, tomatoes, potatoes on the school’s 25 acres, reducing the cost of lunches in the dining room.” At the same time, no one is interested in whether the child wants to engage in farming or not. And children, quite possibly, may have other interests: music, drawing, singing, choreography or writing poetry. The school seems to hint to them: their place is in the village, where they will continue to work for low pay, a bowl of soup. After all, even first-grade students have their corner where they work for food.

Another “innovation” of the school is knitting birch brooms – high school students are engaged in this business. In addition to five days of school, children are forced to work in the production of brooms, which they then sell for 2.5 rubles. At the same time, in Minsk, a new broom costs from 6 to 9.5 rubles. On 1000 pieces (as indicated in the article), with the help of cheap child labour, the owner of the Minsk sauna saved at least 3,500 rubles (1,235 euros). The children earned only 30 rubles, the text says. For comparison: political prisoners who serve sentences in open-type institutions earn 20-40 rubles in the lowest-paid and dirty work (like unloading manure). 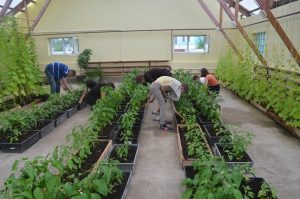 Orphans from the Begoml auxiliary boarding school of the Dokshitsy district, instead of gaining knowledge in physics, geometry and English, are engaged in weeding vegetable gardens on the site, sewing and carpentry. Even in the summer, the children stopped the rest and went to boarding school to take care of the plants. Note: among the pupils of the institution are not only children with retardation of psychophysical development but also social orphans, absolutely healthy children who do not live with their parents. But the state has already decided for them: they do not need a college or university. The skills of caring for cucumbers and tomatoes will allow them to work at a low-paid job in the settlement, and it’s enough. It is not difficult to predict what awaits such children next: poverty, unemployment (after all, unprofitable enterprises in villages are often closed), drunkenness from despair, which means that a new round of social orphanhood is already for their kids. And a new cheap labour force for a “socially oriented” dictatorial state.

Urban schoolchildren are also affected by slave labour. Practice in schools, cleaning the school grounds, weeding flower beds, washing windows in classrooms and sometimes trips to agricultural enterprises await them. We have already recalled how Victoria Popchenya, a resident of Molodechno, went to harvest potatoes and died in an accident. The girl was only 13 years old, and according to the law, a child at that age has no right to enter into an employment relationship. But, as the illegitimate dictator says, “sometimes it’s not up to the laws.” 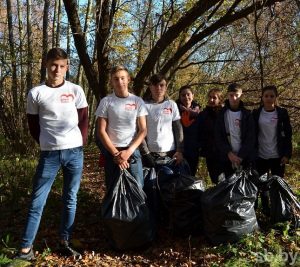 Even if a teenager avoids the fate of harvesting potatoes, he can legitimately be attracted to the Republican Forest Week, the “Clean Forest” campaign, the cleaning of monuments – to what gardening and landscaping services should do. During the “Clean Forest” campaign, the guys go to the forests to clean up garbage. It would seem a noble cause – but it is full of risk. A child may stumble, fall into a pit filled with leaves and be injured. And if he does not take care of a hat, rubber boots and insect repellent, he may be bitten by a tick, which is already fraught with encephalitis and Lyme disease. “Forestry workers will not be able to cope on their own, so college and academy students, schoolchildren from the city, villages and agro-towns of the district participate in the action every year,” forester Alexander Derzhattsev from Gorki says in the state “Selskaya Gazeta”. In gratitude for the work, the children were given branded caps with the logo of the campaign.

There are no analogues of the word “subbotnik” in any language of the world. On one spring or autumn Saturday, civil servants, enterprises employees, schoolchildren and students take to the streets with brooms, buckets, shovels and rakes to clean up cities and forests. This action is purely voluntary – however, this is written only in the state media. People are forced to go out for cleaning and even pay money for it. Even the coronavirus did not stop the dictator in 2020 – despite the WHO recommendations to cancel the Republican Clean-up, the event still took place. As usual, with the participation of Lukashenka. But there was also an innovation – now the participants had to pay the state allegedly to put the territories of children’s camps in order. For example, at the Svetlogorsk thermal power plant, they were asked to pay from 15 to 20 rubles for participation in the clean-up. You need to work all day – however, the company’s management allows employees to leave after a couple of hours. Doctors from the children’s polyclinic in Minsk were forced to hand over 40 rubles each for the benefit of the clean-up, nurses – 25 rubles each, and nurses – 15 rubles each. The children have no money. So, they have to join the work for free and even under the fear of bad grades, which they are threatened with in case of non-participation.

In the schools of the Baranovichi district, a subbotnik is a common thing. In 2019, students of several village schools participated in the district clean-up. They raked fallen leaves, cleaned paths, put in order mass graves and memorial signs dedicated to the victims of the Great Patriotic War. However, Lukashenka cares about the places of memory and constantly gives relevant orders to local executive bodies, regional executive committees and city executive committees. There is not a word in the document from 2018 that schoolchildren should participate in these events. However, their free labour is understandable: the district authorities do not want to spend money from the budget on specialists and involve children, who can be forced by fear to get a deuce or not finish school. 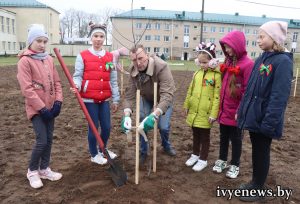 In Ivye this year, even preschoolers and elementary school students participated in the clean-up. Children planted trees in the Friendship Garden, opened by the Minister of Natural Resources and Environmental Protection Andrey Khudyk. The garden planting was associated with the state ideology – the Great Victory and the National Unity Day introduced by Lukashenka. “Large families, families of primary school nursery workers, children and parents who actively participate in the life of the children’s institution, are real helpers in all good and creative deeds, came to the landing of the Family Alley. But the Alley of Clever People and Clever Girls was laid (of course, not without the help of adults), by the creative, athletic, intellectual elite of primary classes,” the local newspaper writes. Hot tea and soldiers’ porridge from the military unit became the payment for the work of children and adults.

In the countries of the European Union, subbotnicks are also held – but they are aimed at increasing people’s environmental awareness. It can be a tourist game where you need to look for souvenirs and gifts and clean the territory. Challenges on social networks are also popular, for example, the environmental initiative #trashtag has found supporters in many countries. In Sweden, locals practice garbage collection while running – this sport is called plogging. And Finns during the local “clean-up”, clean roadsides, forests, build playgrounds, help elderly neighbours. Those who cannot work physically will come in handy in the kitchen to feed the volunteers. Absence on talkoot threatens only a damaged reputation among neighbours.

The Belarusian school has every opportunity to teach children to work playfully, to invent quests and competitions with prizes instead of tedious actions and forced labour duties. However, the low salary of teachers (775 rubles) hardly motivates them to love their pupils banally. And children in villages are forced to work not on their own, but to make life easier for parents who work for a small salary. Belarus is a country of slaves, where both a child and an adult are deprived of labour rights.