Article 31 of the Constitution of Belarus states that each person can determine an attitude towards faith. Also, he has the right to profess or not any religion, individually or together with others. Orthodoxy and Catholicism are widespread in Belarus. There are also Muslims, Jews, Protestants and Hindus. However, after the elections of 2020, the illegitimate state began to actively violate the right of people to determine their attitude towards religion. 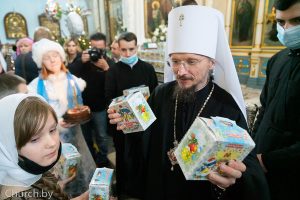 The violation of this right begins as early as childhood. In 2015, a five-year plan for cooperation between the Ministry of Education and the Belarusian Orthodox Church appeared. Under the plan, educational authorities, educational institutions, churches and public organizations would combine efforts “to use the potential of Orthodox traditions and values in the formation of human personality”. Education authorities drew up an action plan with the participation of the Orthodox Church. For example, a national contest of young architects on the Orthodox theme, thematic discussions on the history of Orthodoxy, children’s art competition “Summer of the Lord”, celebrating the birthdays of Orthodox saints, events dedicated to the Baptism of Russia. We tried to find a similar plan for cooperation between the school and the Catholic Church, but we were unsuccessful. 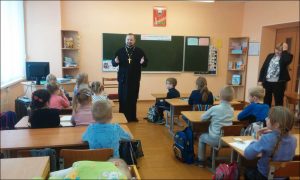 Priests have become a tradition at school rulings, camps, Christmas trees, and other children’s events. This year a priest of the Orthodox Church came to the first bell at Zhirovichi secondary school. The same situation occurred in secondary school No. 8 in Slonim. It has its spiritual curator – the archpriest Father Vladimir Komarov. And the state sees nothing unnatural in this because the BOC even talked about allowing priests to teach general subjects at schools. The clergy believes that this would improve the moral education of schoolchildren and solve the problem of teacher shortages.

This academic year the plan to instil religion in Belarusian schools continued. On September 1, 2021, an optional course, “Basics of Spiritual and Moral Culture and Patriotism”, started at educational establishments. Representatives of the Belarusian Orthodox Church compiled the textbook. Orthodox priests teach the optional course. Metropolit Beniamin took this initiative even although Catholics dominate in the country west. The elective is taught in fifth and sixth grades, which means that at that age, children of 10-12 should already decide on their faith and memorize information about the religion that their parents may not adhere to. 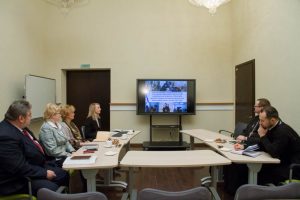 At universities, students also continue to face the imposition of religion. In 2017, the Yanka Kupala State University of Grodno and the Grodno Diocese of the Belarusian Orthodox Church agreed to expand cooperation. Students prepared nine reports and six diploma works, and scientists worked on two PhD theses about interaction with the church. Religion representatives proposed to deepen research on the history of Kolozha Church, to hold a competition or action among students of art and design to improve the landscape of Victory Alley in Kolozhsky Park, to attract talented Kupalovites in the Orthodox singing choir and conduct a tour of holy places.

Grodno State Medical University also cooperates with the Orthodox Church. In 2016, the photo exhibition “In the footsteps of the Bible” opened in the university. Spiritual-educational meetings and talks were organized for students on the theme “Human life as a basic value,” which touched on the meaning of life, suffering, and the limitations of knowledge and experience. Also, future medical students “voluntarily” visited the church – the purpose of these visits was to mobilize “Orthodox medical students for the service of Christ and to support them in this service. 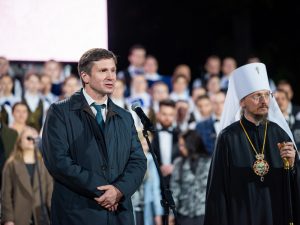 On May 18, 2021, Metropolitan Veniamin of Minsk and Zaslavl, Patriarchal Exarch of All Belarus, visited the Belarusian State University. Here the Metropolitan delivered a lecture to the students and staff of BSU. Rector Andrei Korol expressed confidence that such events “will become a good university tradition in the future”. The rector added that it is significant to find life reference points through spiritual and moral values.

In October 2021, Polotsk State University and the Polotsk diocese entered into a cooperation agreement. The agreement was signed in the sphere of education and social work. It was intended to establish academic and scientific relations, develop scientific potential and ensure high quality of professional training of specialists based on equality, mutual benefit, mutual understanding, respect and trust.

In November 2021, Brest State Technical University held a Republican scientific-practical conference, “The Orthodox Church in the historical destiny of the Belarusian people”, dedicated to the 1030th anniversary of Orthodoxy in Belarus. During the opening, the rector of the university, Alexander Bakhanovich, emphasized the role and importance of the Orthodox Church in the formation and formation of personality, preservation of traditional values of the Slavic peoples and the historical significance of the 1030th anniversary of Orthodoxy in the Belarusian land. The participants analyzed the issues of Christian values of modern youth and considered the Orthodox spiritual traditions in the culture of Belarus.

Having graduated from the university and found a job, Belarusians still face the imposition of religion, even if they do not practice it. There are boxes with collections for the restoration of churches. But the dioceses do not report on the money collected from each point. There is also no evidence that the money is going specifically for the reconstruction. Funds collected during national working days are also often sent to churches. Belarusians are attracted to the church areas improvement. Volunteers of state youth associations and members of student brigades are involved for these purposes. 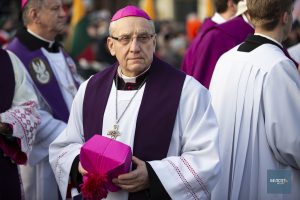 As for other religions, there is no such reverent attitude to them in our country. After the 2020 elections, the usurper accused Catholic churches of anti-state propaganda. “We have not closed them. We are trying to support, protect them. You saw it in the square. They made a fake story that we were not allowed into the church there. In Belarus, churches have worked and will continue to work,” said the dictator. On August 31, 2020, Metropolitan of Minsk and Mahiliou, Archbishop Tadeusz Kondrusiewicz, head of the Belarusian Catholic Episcopate, couldn’t enter Belarus. His Belarusian passport got cancelled, while the church representative had no other citizenship. Lukashenko stated (and state propaganda joined in) that Tadeusz Kondrusiewicz received some instructions in Poland: “It is not important for us who he is – the main Catholic, the main Orthodox, or the main Muslim. He must live by the law. And if you also got into politics and dragged believers, Catholics, who are wonderful people, then the double responsibility”. However, at the Catholic Christmas in 2020, the archbishop returned to Belarus and held a religious service. 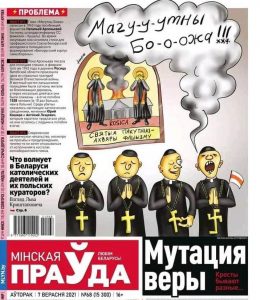 In September 2021, the state-owned “Minskaja Prauda” mocked the activities of the Catholic Church and printed a cartoon on its front page showing priests in distinctive attire and with swastikas. The believers applied to the Ministry of Information, but the officials refused to do anything. They said that distribution of such cartoons is not forbidden by the law of the Republic of Belarus, the author of the “work” does not work there, and the issues of criminal prosecution are out of the department’s competence. The Roman Catholic Church expressed indignation at the publication, calling it a fomentation of religious enmity: “This publication deeply offends the religious feelings of the faithful of the Catholic Church. In the cartoon, the artist transformed the cross into a swastika. The swastika depicted instead of a cross offends not only priests but primarily desecrates the Cross of Christ the Savior, who on it gave his life for the salvation of people.” As might be expected, no one from the editorial board has been convicted of hate speech, but the paper continues to be published.

Lukashenka portrays Catholic believers as protesters, the Roman Catholic Church as the opposition and allows depicting priests with swastikas. No doubt that Lukashenka supports the Orthodox Church. Although in the first days of the protests, the synod of the BOC categorically condemned torture, humiliation and groundless detention of people and called on the Belarusian authorities to stop the violence.

“We believe and hope that the leadership of the country will hear the voices of the offended and innocent victims of the confrontation and that those who have shown atrocity and cruelty will be brought to legal justice and condemnation,” read the resolution of the Synod of August 15, 2020. Metropolitan Pavel, one of the first to congratulate Lukashenka on his victory, later said the congratulations were hasty. In the answer, Lukashenka dismissed Pavel from his position. In November 2020, the head of the BOC press service, Sergiy Lepin, who had criticized the destruction of memorials to murdered protester Roman Bondarenko, resigned. In June 2021, the Most Reverend Archbishop Artemy of Grodno and Volkovyssk, who in mid-August 2020 publicly condemned the brutality of the siloviki and supported peaceful acts of solidarity, and wished solace to the families of the victims, was sent into retirement. Several priests who spoke out against Lukashenko got sentenced to fines and arrests. One church representative, Sergey Rezanovich, is currently behind bars as a political prisoner. But the Orthodox Church remains a supporter of the dictator. 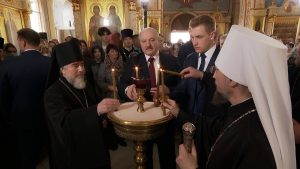 On January 7, 2021, Lukashenko lit a candle at the new Church of the Exaltation of the Holy Cross in Minsk. He urged priests and parishioners to think about the future. On May 2, 2021, Lukashenko visited the Cathedral of St. Cyril and St. Laurentsi in Turov. He thanked Metropolitan Veniamin and other ministers of the BOC for their courage and firmness, especially at the end of 2020: “The Orthodox Church as a whole behaved with dignity and took a solid position. The people appreciated it and will appreciate it again. Evaluations are yet to come because great things are seen from a distance. Everything was not easy. But God helped us, as I said, as long as we are with him in our hearts and our thoughts.” 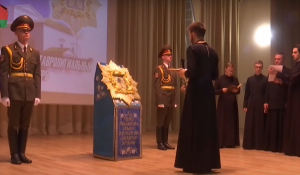 On October 30, 2021, an icon of the Mother of God of Zhirovich was in the military unit 3214. Deputy Minister of Internal Affairs – Commander of the Internal Troops, Nikolay Karpenkov, attended the event. He noted that the Ministry of Internal Affairs, with the church support, will successfully perform all tasks: “We are right, we are builders. We are that army, as Vladyka and Guriy, and the Metropolitan. In heaven, angels protect people and everything good. And we, people, we are the angels – those on earth and with weapons in their hands defend both our homeland and ordinary people.”

The state is trying, by all means, to plant one religion among the people – Orthodoxy (which Lukashenka supports), even though it contradicts the Constitution. It violates the rights of people and especially the rights of children, who at a young age should profess the “right” religion. At the same time, the rights of other believers are constantly violated.