Last year brought fresh ideas to «Our House» — we were the first independent source to launch voice chats in Telegram. The first chat took place on July 21, 2021, and political scientist Pavel Usov became his guest. Since then, we have conducted almost 30 voice chats with guests from different spheres — Lithuanian deputies, representatives of the Belarusian diaspora abroad, public activists and former political prisoners. For everyone’s convenience — after all, many might not have time to listen to the speaker live – we also published text versions of chats. 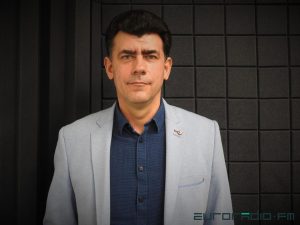 Our first guest Pavel Usov presented his vision of the illegitimate government policy in Belarus. He noted that in 2022, a partial gradual release of imprisoned may begin, but this is after the authorities are sure that the interior space has been completely cleaned. He also predicted the loss of the real sovereignty of Belarus, the introduction of economic, financial centres and political governing bodies united with Russia. «The longer the crisis lasts, the longer Lukashenka is in power, the more opportunities Russia has to start the final solution of the Belarusian issue, which means a dark period of development for Belarus for many years,» Pavel Usov said.

Our voice chats were international. So, on July 29, Anastasia Nenka, co-director of the Information and Advisory Women’s Center in Ukraine, spoke to the audience. She told about the conflict transformation and avoiding it. Also, she advised how to influence it and how to solve it. On August 5, in the voice chat of «Our House», it was possible to communicate with the Ukrainian political scientist Yevhen Magda. He spoke about the perception of the situation in Belarus by Ukrainians. The political scientist noted that Svetlana Tsikhanouskaya does not always treat Ukraine with increased attention and addressed Putin many times. On September 29, we invited Yevgenia Lutsenko, Director of the Center for Social and Gender Studies «New Life», member of the European human rights organization Anti-Discrimination Center «Memorial», member of the Gender Expert Council at the Interfractional Association «Equal Opportunities» of the Verkhovna Rada of Ukraine, member of the National Council of Women of Ukraine, Deputy Head of the Public Council at the Ministry of Foreign Affairs of Ukraine, to the voice chat. We discussed Ukraine’s struggle for gender equality with her.

On August 17, the first representative of Lithuania appeared in the voice chat of «Our House». Former Lithuanian army officer, Juozas Barškietis, spoke about how democracy won in Lithuania, about the events of January 13, 1991, and how after Lithuania gained independence, Russia began an economic blockade. On August 19, we met in a voice chat with Deputy of the Lithuanian Sejmas Tomas Tomilinas and discussed what Belarusians should learn from Lithuania. On August 30, the co-founder of the Freedom Party of the Republic of Lithuania, Andrius Almanis, came to the voice chat, who spoke about the political life of Lithuania. On September 2, we talked with a Lithuanian public figure, a friend of the ICCI «Our House» Valdas Bartkevicius, about the hybrid war of Belarus against neighbouring countries, about the attitude towards Belarusian democratic leaders and about Lukashenka’s attempts to legitimize himself. On September 16, Andrius Daryala, director of the Russian Drama Theater in Lithuania, spoke about the place of language in culture, about his family’s attitude to communism and the Soviet past.

On October 7, a representative of Germany, a former municipal deputy of one of the central districts of Frankfurt-am-Main, chairman of the commission on the integration of the Free Democrats Party (FDP) of Hesse, Michael Rubin, spoke in a voice chat. He shared information about the work of local self-government in Germany. On December 13, Vera Horton, an activist of the Belarusian diaspora in the UK, joined the guest list. She answered the questions of the subscribers of the Telegram channel. On December 15, the geography of the participants expanded to Scotland — Irina McLane, a representative of the People’s Embassy in Scotland, spoke about the work of the diaspora.

Representatives of the Belarusian democratic forces, activists of public organizations and movements visited «Our House» voice chats. On August 3, Valery Tsepkalo, ex-candidate for president of Belarus in the 2020 elections, addressed the audience. The main topic of the conversation was economic reforms. Valery Tsepkalo told what transformations Belarus needs in the future and what functions the president and the parliament should have. On August 24, the tradition of voice chats was continued by the head of the public association «Dapamoga», Natalia Kolegova. She told about the work of the humanitarian corridor for Belarusians in Lithuania, about how they had to survive in the conditions of competition in charity, about unexpected solutions to problems and much more. On September 9, Veronika Mishchenko, an associate of Nikolai Statkevich, an activist of the «People’s Hramada», became a guest of the voice chat. She told about the origins of the women’s revolution in Belarus and about the preparation for the confrontation. On September 23, Roman Kislyak, a human rights activist from Brest, who actively opposed the construction of a battery factory, shared his opinion about the Belarusian protest and recalled the history of confrontations in Brest. On September 30, activist Vadim Dmitrenok told about what he experienced in prison and the conditions there. On October 5, Doctor of Philology Alexander Adamkovich, another representative of the Belarusian diaspora in Lithuania, came to the voice chat. He spoke about the role of Belarusian literature, what the authors of the Soviet period wrote about, how literature forms national identity.

In the voice chats, we began conversations with a psychologist. On August 28, we talked with the director of the Skalbes crisis centre, Raivo Vilcians, and the head of telephone support for victims of crimes in Latvia, Santa Laimina. The topic of the voice chat is «How to provide yourself with emotional help in a difficult period». On September 3, Inese Lapsina, a clinical psychologist, a psychotherapist of cognitive behavioural therapy, a lecturer at the Latvian Pedagogical University, discussed psychological assistance to children. We dedicated September 11 to traumatic stress. In a voice chat, consultant psychologist, crisis psychologist, trauma specialist Elena Gribanova told how to cope with traumatic stress yourself and help others overcome it.

In the last voice chat of 2021, we gave the microphone to Nikolai Bondarenko, a visually impaired citizen activist, an independent observer on two presidential campaigns, an entrepreneur and a musician. After the protests of 2010, he was injured and continued to work for a long time, until in 2013, he became completely blind for an hour. Nikolay told about disability, about the falsification of indicators by doctors, about operations and examinations.

«Our House» continued the tradition of voice chats this year — the first one will take place on January 13 at 19.00. We hope that this year our listeners will have many guests who will share information from their lives, tips, talk about the experience of struggle, educate in various fields. We believe that this tradition will remain in «Our House» even after the people’s victory.