On May 18, the trial on the “Autukhovich case” started in Hrodna. Nikolai Autukhovich and 11 others are accused of preparing for terrorist attacks across the country, importing weapons from Ukraine to Belarus, blowing up a police car in Volkovysk district and burning the house of a law enforcement officer. Mikalai Autukhovich, among numerous articles, has one, for which he could face the death penalty – Part 3 of Article 328 of the Criminal Code (an act of terrorism and preparation for it). At the trial, he and Liubou Rezanovich were in separate cells – as especially dangerous. 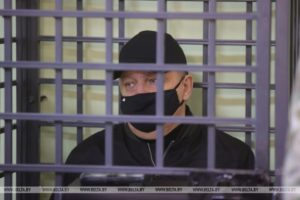 Despite the obvious political character of the charges and the fact that Mikalai Autukhovich is recognized as Lukashenka’s enemy, the Human Rights Center “Viasna” still has not put him in the list of political prisoners. Iryna Harachkina, Viktar Snegur and Pavel Sava are also not recognized as political prisoners by the Human Rights Center “Viasna”. Artur Popok from the list of the “Autukhovich group” is wanted. 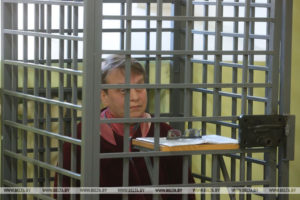 Two of the group, Mikalai Autukhovich and Liubou Rezanovich, are on the case as “especially dangerous”. Liubou Rezanovich is 57 years old, she is the wife of the Orthodox priest Siarhei Rezanovich. She was detained on the same day as her husband and son Pavel. Liubou Rezanovich previously owned a taxi service. Mikalai Autukhovich had known Rezanovich’s family for a long time and often spent time in their house in Brest, and the family helped him in difficult times. At the trial, Liubou Rezanovich became ill, so the lawyer petitioned for a change of preventive measure against the woman. The lawyers and the defendants were unanimous in supporting the sign. The state prosecutors did not support the motion because of the crimes of which Liubou was accused. The court was adjourned. 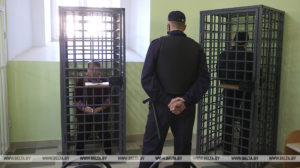 Liubou Rezanovich’s ill health is caused by the fact that the elderly woman was put in a cage of literally one meter by one meter. Anders Breivik, the killer of 77 people, was not tried in the cage, he was surrounded by people and was not handcuffed. Samuel Little, killed 93 people, was also sitting in the courtroom, probably because he was confined to a wheelchair at the time of the trial. Rosemary West, along with her husband Fred, murdered nine people, including one of her daughters and several neighbourhood children. She is regarded as one of the most brutal female killers in history, with a court sentencing her to life imprisonment. Rosemary West was brought to court with only one handcuffed to the hand of a female warder. The killer of 40 elderly people, Juana Barraza, was sentenced to 759 years in prison. After the trial, Juana was even able to talk to journalists.

Liubou Rezanovich, despite being accused of terrorism, did not commit a single murder. But she took part in the hunger strike against the Lukashenko’s Decree No. 140 of March 22, 2004, on the national fee for the importation of vehicles into the country for commercial purposes. At that time, 15 people were on hunger strike in Brest: the owners of minibuses, their family members, drivers and two individual entrepreneurs from the local market. Maybe the charges under Article 289 of the Criminal Code (the act of terrorism) were triggered by this old story.

The “Avtukhovich group” is being tried by Maxim Filatov. Until 2022 he was deputy chair and judge of the Lida District Court. In January 2021, Maxim Filatov convicted political prisoner Vitold Ashurak. In May 2021, Vitold Ashurak died in penal colony No. 17 in Shklou – his death was preceded by torture. The judge got into the fourth package of EU sanctions against the regime in Belarus.

Unfortunately, these 12 Belarusians have no chance to be acquitted – the Belarusian courts issue a negligible number of such verdicts. There is also no chance that the charges cannot be proved, or at least the punishment can be mitigated. An innocent man can die for his position against Lukashenko – and this is the reality of Belarusian illegitimate justice.