In Belarus, anyone can become a terrorist just for speaking out against Lukashenko. Olga Karach, Maria Kalesnikava, Maksim Znak, Pavel Latushka, Sviatlana Tsikhanouskaya and other opposition figures are already on the list of persons involved in terrorist activities. The defendants in the “Autukhovich case”, partisans of the “railway war”, Minsk citizens charged with preparation of terroristic attacks in the “Busly Liaciac” group are also there. Among them is Aliaksei Ivanisau, a 53-year-old, charged with creation of a terrorist organization or participation in it (Article 290-4 of the Criminal Code) and committing an act of terrorism against a state or public figure (Article 359 of the Criminal Code).

Businessman, former officer, father of three children – what we know about Aliaksei Ivanisau 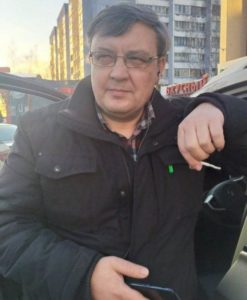 Aliaksei was born in Estonia, but soon after his birth, his family returned to Minsk, where Aliaksei studied at school and then at the vocational school No. 40 and became an electrician. The political prisoner always wanted to be an officer, like his grandfather, so after graduating from the vocational school, he entered the Leningrad Higher Military School of Communication. From there, he went to serve in Sambir, a city in the Lviv region. After the collapse of the USSR, he decided to return to Belarus. There, he was appointed a head of the telephone unit at the headquarters. Aliaksei decided not to continue his military career and started a business – he set up firm selling garage doors.

Aliaksei Ivanisau is a father of three sons. The eldest is a doctor, already having his own family and a child. The middle son works at his father’s firm. The youngest Eldar is 14 years old. Aliaksei’s 76-year-old mother Natalia and his sister Anna, with whom he has an excellent relationship, worry a lot about Aliaksei. A close family friend says: “Natalia Leonidovna has written 55 letters to her son and received 119 messages from him. Mother and sister constantly send him parcels and used to send money, but now that Aliaksei has been put on the terrorists’ list, he has been banned from receiving money transfers”.

Aliaksei Ivanisau is the father of three sons. The eldest is a doctor, he already has his own family and a child. The middle son worked with his father at the firm. The youngest Eldar is 14 years old. His 76-year-old mother Natalia and his sister Anna, with whom he has an excellent relationship, are worried about Aliaksei. A close family friend says: “Natalia Leonidovna has written 55 letters to her son and received 119 messages from him. Mother and sister constantly send him parcels and used to send money, but now that Aliaksei has been put on the terrorists’ list, he has been banned from receiving money transfers”.

Aliaksei Ivanisau has never been interested in politics before 2020. On the election day on August 9, 2020, Aliaksei and his mother were at four polling stations – kilometer-long queues lined up there, people were wearing white bracelets on their wrists. “He had never seen anything like that before, so he became uplifted and full of hope,” Aliaksei’s friend shared with “Our House”. “That’s why he joined the protest, and on September 27, 2021, he was detained”.

How Aliaksei Ivanisau was turned into a terrorist 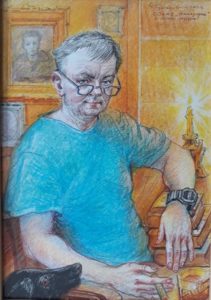 On the day of his arrest, the police searched Aliaksei’s mother’s flat and house. Around 4 pm, the woman got detained, convicted and sentenced to 25 days in jail. A family friend said that Natalia Leonidovna was serving her sentence in Akrestsina in the cell No. 15. Anastasia Krupenich-Kondratieva, sentenced to 112 days of arrest, was doing time together with her. Homeless women with lice were intentionally placed in the cell from time to time to infect political prisoners. “In the same cell with Natalia Leonidovna there was a woman, having a son in the next cell behind a wall. She was afraid to hear her son’s last name during a rollcall; fortunately, it did not happen. Can you imagine: the 76-year-old woman was released from Akrestsina at night, she couldn’t even get home by public transport or taxi, as she did not have any money on her, and had to hitch a ride. When she got to her flat, she learned from her daughter that Aliaksei had been detained late at night on September 27,” a close family friend said with indignation.

When Aliaksei was arrested, the investigator initially said he was a witness in the case because he saw someone dismantling surveillance cameras. However, during the interrogation, the enforcers started pressuring him. They threatened to arrest his son, who did not participate in the protest and knew nothing about it. Probably, that was the reason why Aliaksei confessed to something he didn’t do. At first, the man was accused of hooliganism (Article 339 part 2 of the Criminal Code) and group actions grossly violating public order (Article 342 of the Criminal Code). Nevertheless, after a while charges of terrorism appeared in the case, and Aliaksei was added to a group with five other men.

“Why the terrorist article specifically? I think the enforcers needed to create a high-profile case. It’s no coincidence that a bill allowing the death penalty for attempted acts of terrorism was adopted. That is why a ‘criminal group’ appeared, but it is completely absurd to accuse Aliaksei of terrorism. He is a very kind person,” the man’s friend shares.

Ten days after his detention, Aliaksei Ivanisau was transferred to the pre-trial detention center in Volodarsky street. Since then, he has been living in a cell with 23 other people, apart from him, including 17 political prisoners. Aliaksei reads a lot in prison, constantly asking for historical, geographic and military books. There is a library in the pre-trial detention center, medical parcels are allowed, so his relatives managed to give Aliaksei a blood pressure monitor, as he needs to check his blood pressure all the time. In his cell, Aliaksei Ivanisau met the artist Ales Pushkin, who painted his portrait, the journalist Andrei Pochobut, and a former justice colonel Viachaslau Kandyba.

“He admires the young people who are doing time with him. His cellmates are constantly changing – new detainees come and share news from the outside. Everyone is very aware of the war in Ukraine. Aliaksei has a positive attitude. He waits for the trial, keeps his spirit up, and believes everything will be fine,” a close friend of Aliaksei tells.

What is known about the trial of Aliaksei Ivanisau?

The trial against the businessman started on June 6, the process is going to take place in the Maskouski district court of Minsk. The case is heard by the judge Anastasia Popko. In April 2022, she sentenced the political prisoner Aliaksei Kudasau to 11 years in prison, in November 2021 – Mikalai Dziadok to 5 years, and in December 2021 – sentenced a mother of many children Olga Zolotar to 4 years.

Before the trial, Aliaksei’s sister managed to see him. The mother was not allowed a visit – she saw her son only in the courtroom. “Police still have not returned the things seized during the search to Natalia. They tried to interrogate her several times, but she refused to testify,” Aliaksei Ivanisau’s friend added.

Concluding his conversation with our journalist, the friend of the political prisoner added: he and the man’s family believe and do everything to have Aliaksei released as soon as possible. We also hope that Aliaksei Ivanisau will shortly be released from prison and return to his family and friends. On July 1, the political prisoner will turn 54 – you can support him with letters and postcards: Aliaksei Ivanisau, pre-trial detention facility No. 1, Volodarsky Street, 2, 220030, Minsk.