While the younger pupils are enjoying the first days of the summer holidays and the 9th and 11th graders are taking their final exams, it is time for the military training camp for the 10th graders. This practice has been for many years, as high school students take the subject “pre-military and medical training”. This year is no exception – students of tenth grades from all over the country went to the training camp.

Pre-conscription and medical training stayed in the Belarusian education system from the USSR. It was introduced after the decree “On obligatory military training” of April 22, 1918. The law ordered the opening of basic military training centres for pupils aged 15 to 17. People aged 18-20 were also supposed to undergo such training, after which they were enlisted in reserve units. In 1962, the subject was abolished for all high school students. In 1967, with the adoption of a new version of “The Universal Military Duty Law of USSR”, the subject returned. Schools and vocational schools organised classes of military preparation and weapons storage rooms, in some places, usually in basements, there were shooting ranges for small-calibre rifles. During the lessons, the Soviet pupils learned to march in formation, learnt the mechanism of automatic weapons and grenades, trained to put on the gas masks, orientate with a map and compass, dig trenches. There was also the ideological part – the study of military regulations of the USSR, stories about the “decaying West” and the best Soviet country in the world.

Today’s pre-conscription and medical training lessons are not much different from those given to Soviet schoolchildren. High school students from several educational institutions meet at one school and study in groups. In addition to theoretical training, trips to military units and excursions to museums with exhibits on the war are planned.

Teenagers from one of the Minsk districts learn service regulations, handle submachine guns at pre-conscription military training classes. And a teacher shows the boys a video of a military parade in Russia and tells them that Putin is a good president.

In Svetlogorsk, schoolchildren listen to military songs and march around the school and along the corridors. They learnt the oath of allegiance to the motherland. The teacher, a retired police major, emphasized that Belarus and Russia should be united, while Poland, Lithuania and the USA want to invade and destroy our country. During the pre-conscription training lessons, the guys watched war films and footage from military exercises.

The girls have similar medical training, except they learn more about first assistance and functioning of the body. During their lessons, girls practice dressing limbs in case of injury, transporting the wounded, and listen to lectures on healthy lifestyles and safe sex. In addition, schoolgirls visit medical museums or hospitals.

According to the students, they can’t skip these classes because they would have to reimburse their cost. At the same time, pre-school and medical training interferes with the children’s ability to study and prepare for graduation because they have to stay in class after the school day or skip lessons altogether and then work on the missed material. 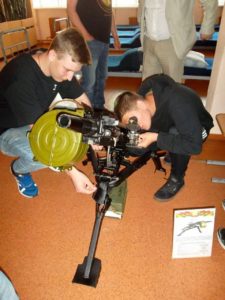 After the end of the school year, the 10th graders have their field training camps, which are held for both boys and girls. This year, 10th graders of Tolochin pre-conscription training centre visited the 19th separate mechanized brigade. There they got acquainted with samples of weapons and military equipment, saw how the life of military conscripts was arranged. The military demonstrated to the pupils dynamic tank simulators and classrooms. 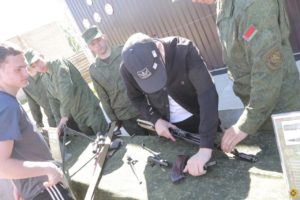 The 11th separate mechanized brigade held a field training camp with ten-graders from Slonim schools. The boys spent a whole week getting acquainted with the life of servicemen. They tried to drive military vehicles, practiced handling submachine guns and worked on military simulators.

Schoolchildren from Grodno had their training camp at the 6th separate mechanised brigade of the Guards. The boys overcame obstacle courses, practiced tactics in combat, learned to wear gas masks and body armour, shot on a computer simulator and, of course, loaded a submachine gun with ammunition. The tenth-graders were encouraged to enrol in the Military Academy. 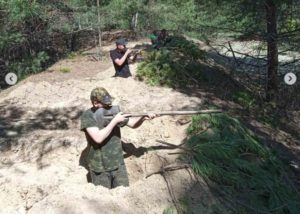 The most notorious in the network were the camps for pupils of the Gomel region. The students of Symonichy secondary school of Lelchitsy district and Domanovichy secondary school of Kalinkovichy district were forced to dig trenches and train in the shooting. A teacher of military training from Symonichy set up a practice shooting in the woods. Fortunately, the tenth pupils were not given real machine guns and were replaced with… shovels. The fact of the pupils shooting from the shovels was so striking that not only Belarusian but also foreign media wrote about it.

Lukashenko is always threatening that Belarus will be attacked from the south and west. While teenagers in Europe and the USA study, engage in hobbies and make plans for their future, young Belarusians go to war instead of school and dig trenches, fulfilling the order of the illegitimate dictator. But we think that children should not be tools in the hands of crazy usurpers. They should be studying, growing and having a quality rest, not engaging in war.