In connection with the beginning of Russia’s military aggression against Ukraine, the number of citizens of the Republic of Belarus who apply for visas for the Republic of Poland and other countries has sharply increased. Moreover, this applies to both humanitarian visas and work visas. But it is Poland that is the most in-demand country in terms of visa requests.

The main reasons for the increase in applications are:

– refusal to go into military service, as the Lukashenko regime is a co-aggressor in the Russian military campaign;

– increase in the number of repressions against the active civilian population. Moreover, some of the repressions are already directly linked to the war in Ukraine – Belarusians are beginning to be persecuted because of their anti-war sentiments and open position on this issue;

– the decision of parents to move due to the worsening situation in educational institutions, including the closure of Polish, Lithuanian and other schools and the inability to continue education in their native language, as well as the forcible imposition of the ideology of the dictatorial regime on children.

Many Belarusians decided at the outbreak of the war to urgently leave the Republic of Belarus and the main countries of departure were Georgia and Turkey, as well as a number of other countries with which Belarus has a visa-free regime. Staying in Georgia, Turkey and other countries, where Belarusians do not need a visa, is not safe for Belarusian citizens, among other reasons, because the signing of the agreement on cooperation between the Belarusian KGB and the Georgian security service came into force on 13 August 2021: housing prices have increased, the labour market cannot provide jobs for Belarusian citizens, periodically Belarusians face discrimination and xenophobia, and fear of forced deportation to Belarus.

At the initiative of the ICCI “Our House” a survey was conducted to identify the main problems of Belarusian citizens in connection with the deteriorating situation in the country, related to the increased level of repression and conscription (both conscripts and conscripts). So far 192 people have taken part in the survey. The main reasons why Belarusians are leaving or intend to leave the country include fear of persecution for their civic activeness, repressions and conscription. Of all respondents, 23% are staying in Belarus at the moment, 25% are already in Poland and at least 12% are in Georgia. For 14%, the issue of obtaining a visa and/or further legalisation in the country of residence is acute. Moreover, 16% of citizens who have already left Belarus and are in other countries face the same issue of visa and/or legalisation.

At the moment, the receipt of visas of the Republic of Poland in Belarus is limited primarily by cuts in the staff of the embassy and consulates. As early as the beginning of 2022, it was reported that consular staff was cut due to conflicts between Poland and Lithuania (“Polish Foreign Ministry reacts to expulsion of Consulate General in Brest”, January 6, 2022, link – https://www.dw.com/ru/mid-polshi-otreagiroval-na-vysylku-sotrudnika-genkonsulstva-iz-belarusi/a-60344379). The reduction in staff has resulted in an increase in the length of time it takes to make visa decisions.

Poland used to issue Schengen visas to Belarusians, but now, amid the diplomatic conflict as well as Russia’s military aggression against Ukraine, its visa centres only issue visas for humanitarian purposes, for studies, work, with the Polish card or the “Poland. Business Harbour” program. Visas for tourism purposes remain indefinitely unavailable.

Moreover, there is a fee for applying for a humanitarian visa, which is intended for people who find themselves in a difficult situation of repression and persecution. The minimum fee for 1 person is 650 roubles or 182 € (the National Bank of Belarus exchange rate as of 29 June 2022 is 1 € = 3.57 roubles). 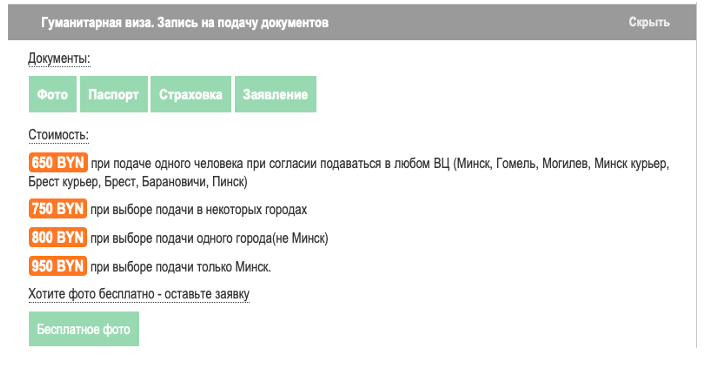 According to an analysis of the chats of Belarusians where visas to the Republic of Poland are discussed, it is confirmed that the usual booking through the website used by Belarusians is not available. Citizens who want to get a visa (any visa) have to turn to various agencies or other citizens, who provide paid assistance in signing up at the consulate. There are also a number of chats, where various companies and private persons offer Belarusians to make an appointment for payment (Catching dates for visa – link https://t.me/+5X8FwDS1ydIzNTBi; Registration in the Polish visa centre – link https://t.me/zapisvc ).

In confirmation of the facts about the difficulties of applying for humanitarian visas (even through intermediaries), here is a response in one of the chats of Belarusians abroad. There are more and more such cases since 24 February 2022.

Information from ICСI “Our House”: The Embassy of the Federal Republic of Germany in Minsk has resumed issuing visas since 11 June 2022. Visa applications for all purposes of travel are accepted. However, there is a warning that the processing time of visa applications may be longer due to the increased demand. The Visa Department of the Embassy of Germany in Minsk also processes applications for Schengen visas for the primary purpose of stay in Belgium, Luxembourg, the Netherlands, Austria, Slovenia (https://minsk.diplo.de/by-be/service/00-VisaEinreise). There is currently no information on how the application is made, how long the waiting time is, whether there have been refusals or other situations in public sources.

When applying for a humanitarian visa in Belarus, based on our analysis, we highlight the following problems:

It is necessary to understand the fact that for the majority of Belarusians, who need humanitarian visa, the time of documents’ processing is the most critical one, often it is hours. The main reason is that a Belarusian, who is persecuted for political reasons and / or threatened with conscription, very quickly gets in the list of restricted to travel and in the future cannot leave the country legally, even with a visa.

Problems with obtaining visas in Georgia

Since the beginning of the active stage of Russia’s military aggression against Ukraine on February 24th, 2022, more than 20 thousand citizens of Belarus have left for Georgia. There is a visa-free regime with Georgia. Most of the citizens who left Belarus and ended up in Georgia relied on visas of the Republic of Poland.

Note: You can read more about the departure of citizens of Belarus from February 24, 2022 in our materials:

Belarusians cannot get a work visa in Georgia without a residence permit, so the only option is to get a humanitarian visa. At the request of ICСI “Our House”, a survey on humanitarian visas was conducted on the channel “Belarusians in Georgia / BY in Georgia” (https://t.me/BelGeorgia). Its results can be seen in the screenshot below, but the most important one is the refusal rate of 26%.

According to the respondents, the main reasons for refusal are:

In the case of politically repressed Belarusians who ended up in Georgia, it can be assumed that the country is safe for them. But in the case of the Belarusans, who are conscientious objectors or deserters, the situation is much more complicated.

On August 13, 2021, an “Agreement on Cooperation between the Belarusian KGB and the Georgian SSR” entered into force. The agreement regulates cooperation and interaction between the KGB and the SSG. This includes exchange of information, assistance in combating crimes against state security, terrorism and cyber-terrorism, organised crime, trafficking in weapons, corruption, disclosure of classified information, etc. The forms of cooperation include fulfilment of requests and transfer of personal data, holding of joint events, exchange of experience and so on. According to representatives of Georgian official bodies, this agreement cannot concern cases of politically repressed Belarusians, but it does not concern conscientious objectors or deserters. Thus, there is a very high probability and risks that Belarusians who are conscientious objectors or deserters may be deported from Georgia to Belarus.

Thus, we see an acute need of Belarusians for assistance in issuing visas. And we do not deny the fact that visas are being issued, but due to the growing need for them, the time for decision-making has increased significantly, and there are fewer and fewer opportunities to get a visa. It is worth stressing once again that time is a critical resource for many Belarusians. Especially if they are in Belarus itself, and their lives are at direct risk – either to be repressed for their civic stand, or to be conscripted into the army, where they can be sent to fight on the side of the aggressor.