The medical community is one of the most united in the world. Belarusian doctors are no exception.

Doctors were the first to protest as a community. This is not surprising, since it was the doctors who saw in what condition and with what wounds people were returning from the pre-trial detention centers and from the streets in the first days after the elections. At the same time, completely different pictures were shown from TV screens, and the press service of the Ministry of Internal Affairs still denies the existence of torture.

And until now, it is the doctors who treat the victims every Sunday after peaceful (from the side of protesters) protesting marches. They also periodically take political prisoners in ambulances when their health deteriorates due to conditions of detention and their condition begins to threaten their lives.

Medics heard with their own ears the orders for ambulance stations not to go to civilian calls to protest sites. Ambulances were thrown out of Emergency cars which were used by riot police to drive up to the protesters without hindrance.

The doctors themselves also are falling under repressions, are repeatedly detained, beaten for trying to provide medical assistance.

In the last few days after the total strike began, the repression has intensified. Doctors and medical students cannot join strike, but they stand in the chains of solidarity in their spare time and find themselves detained, fired and expelled. Below is a chronicle of the repression of doctors in just the last week.

Today, November 7, doctors in Minsk went on a march protesting against repression and pressure on medical workers. As a result, the doctors were not even allowed to start. At the gathering place, people in masks without identification marks, who arrived in minibuses without numbers, were detained about 30 doctors.

At the moment, the whereabouts of the detainees are unknown

Detention of 11 doctors of Cardiology center on October 27, 2020

In the morning of October 27, before the start of the work, the doctors of the Republican Scientific and Practical Center “Cardiology” joined the chain of solidarity on Dzerzhinsky Avenue, not far from the Republican Scientific and Practical Center. According to doctors, there were 20-25 of them there. At some point, minibuses drove up to the crowd, some of the doctors managed to escape and hide in the underground passage.

The head of the X-ray operating room of the Republican Scientific and Practical Center “Cardiology” Oleg Polonetsky was detained. This is a unique doctor, about whom colleagues say that he has golden hands. They also detained cardiac surgeon of the Republican Scientific and Practical Center Vladimir Andrushchuk, head of the department of computed tomography Irina Gaidel, X-ray endovascular surgeon Maxim Tsybulsky, anesthesiologists-resuscitators Andrei Bury, Dmitry Chuklai and Evgeny Poloiko. Also on Dzerzhinsky Avenue, anesthesiologist-resuscitator of the 4th city clinical hospital Alexander Filippov was detained. In total, 11 doctors were detained.

The work of the Department of X-ray Endovascular Surgery, which deals with emergency patients with myocardial infarction, was blocked.

The possibility of emergency diagnostics and treatment of critical situations of postoperative complications is blocked. By noon after the director of the Republican Scientific and Practical Center “Cardiology” Natalya Mitkovskaya arrived at the police station, all the detainees were released with protocols according to 23.34 Administrative Code. This means that each doctor will face a trial, the results of which will be a sentence in the form of a fine or up to 15 days in prison.

All operations scheduled for the 27th were rescheduled.

Detention of two resuscitators for a picket in defense of doctors from Cardiology center on October 27, 2020

In Borovlyany, on October 27, Anna Sushchinskaya and Anna Karas, anesthesiologists-resuscitators of the Minsk Regional Clinical Hospital, were detained. After work, the doctors came out to support their colleagues from the Republican Scientific and Practical Center “Cardiology”, according to them, they did not shout anything and did not hold any symbols. There was just a poster “I / WE RSPC” Cardiology “ in their hands. 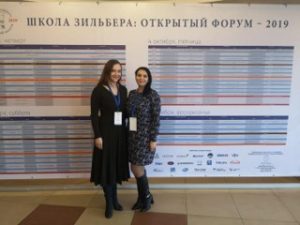 In the evening they were released from the police station with protocols under Part 1 of Art. 23.34 of the Administrative Code (Violation of the procedure for organizing or holding mass events), and in the morning at work they heard about a possible dismissal.

As the doctors said: “They (top management of the hospital) explained to us that we work in a state institution, and if we plan to go to rallies, then we have no place in this institution. And if we want to write a letter of resignation now, then it will be signed. We refused and asked if they intend to fire us, on what grounds. We were told that now there are no grounds, but they will be looking for them.”

As a result, all the colleagues of the resuscitation specialists from the entire department met with the head physician.

The chief physician of the Minsk Regional Clinical Hospital, Alexander Linkevich, announced the following: either doctors work or participate in the political life of the country. And only when the doctors announced that they were all ready to quit, he was forced to promise not to fire anyone for civic activity.

Dismissal of medical students on October 28 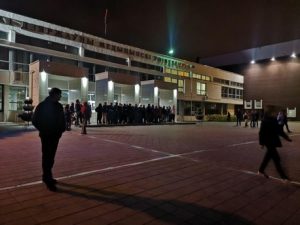 On October 28, 29 students were expelled from the Belarusian State Medical University for participating in peaceful protests (singing in the corridor between the lectures and oral agitation of fellow students). Moreover, the expulsion was officially issued for absenteeism, which in fact did not exist. To disperse teachers, parents and fellow students who came to express their outrage at the expulsion by just standing near the entrance, the university administration called riot police.

One of the expelled students spoke with the university administration:

– In the administration, I asked why among the reasons for my expulsion – missing classes? On October 26, I was there. To this they answered me: “What, have you come to arrange a demarche?” – says the girl. – I was told that if I had come quietly and apologized, maybe they would have forgiven me. They explained that they were like a second family to me, that they had talked to me more than once and tried to save me. Now, as far as I understood from communication, my only chance to recover is to write a petition where I renounce my political convictions and undertake not to do anything like that. Then maybe next school year I will be reinstated.

Detention of 9 doctors on November 2

On the 2 of November, several dozens of doctors came out after work on Derzhinsky Avenue in white coats to support the students expelled from the Medical University the day before. Soon riot police arrived and 9 people were detained. At the moment, four have received from 8 to 15 days in jail in courts.

The rest are awaiting trial in the pre-trial detention center.

There is a very strong pressure on doctors who openly express their attitude to what is happening.

In particular, the Vitebsk doctors, who recorded a video message to the authorities and people of Belarus, were warned by the prosecutor’s office about “the inadmissibility of public discrediting of the authorities, distortion of the socio-political situation in the country, and other actions that could cause harm to the national interests of Belarus.” Otherwise, they can be prosecuted. The documents are below. 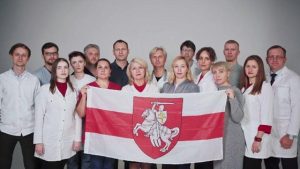 In the course of overseeing the implementation of the legislation of the Republic of Belarus by the prosecutor’s office of the city of Vitebsk, it was established that a video message from doctors of medical institutions in Vitebsk was published on the global computer network Internet, in which you took part. 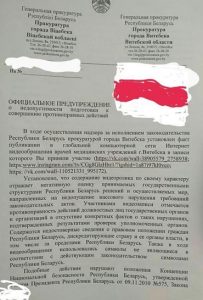 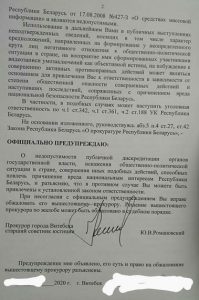 of the Republic of Belarus “On the Mass Media” and are unacceptable.

If you use unconfirmed information in public speeches, including the nature of assumptions aimed at forming a negative attitude towards the socio-political situation in the country in an indefinite circle of people, at the perception of the conclusions formed by the participants in the video recording as an objective truth, at the induction of active unlawful actions, it may be the basis for bringing you to responsibility, depending on the degree of public danger of the actions committed and the consequences that have occurred, associated with harm to the national security of the Republic of Belarus.

In particular, in such cases, criminal liability may arise under Part 1 of Art. 342, part 1 of article 361, part 2 of article 188 of the Criminal Code of the Republic of Belarus.

I warn you officially:

On the inadmissibility of public discrediting of public authorities, distorting the socio-political situation in the country, committing other similar actions that may cause harm to the national interests of the Republic of Belarus, and I explain that otherwise you may be held liable under the law.

We ask you to express solidarity with Belarusian doctors, who are forced to do their job under a double pressure. Amid the coronavirus epidemic and unprecedented pressure from the Lukashenko regime.