After the elections, the hostile attitude of the illegitimate authorities towards the white-red-white flag became especially noticeable. And the Belarusians reacted in a peculiar way – white and red T-shirts, towels, underwear, hung out on balconies in the order of the colours on the flag, as a sign of protest. The reaction of the security forces was immediate – a war broke out against the clothes of the “opposition colors”. 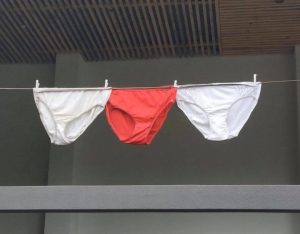 The first pictures of white-red-white laundry appeared on the balconies of Belarusians back in August. On August 29, Twitter user @__ C3PO_ posted a photo of white-red-white underpants on a balcony. Subscribers reacted vigorously, with some even tagging the emergency service Twitter account and commenting, “Get out, there’s WRW”[1]. It is not known whether representatives of the Ministry of Emergency Situations responded to the call. 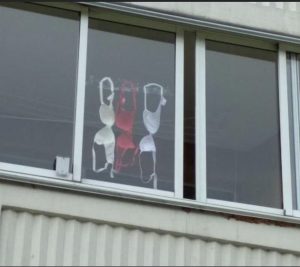 Another photo of white-red-white underwear appeared a few days later, on September 6, on the Twitter account of the Belarusian poetess Valzhina Mort. In a commentary on the photo of white-red-white bras hanging one after another, she wrote: “These are the colors of the historical Belarusian flag, which was replaced by the Soviet flag. Although it is not officially banned, you may be arrested for wearing these colours. Red and white are national colors: red embroidery on a white canvas[2]. ”

One of the most striking episodes of this confrontation was the struggle between law enforcers and underwear in the “Cascade” apartment complex in Minsk. We present to you the chronology of the events of this “war”. 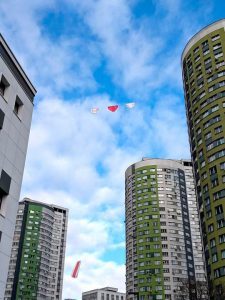 The news about white-red-white underwear hovering above the residential complex “Cascade” right in front of the traffic police appeared on the Telegram channel “Cascade Live” on November 9. It turned out that this underwear was sewn by hand, each piece was three meters wide[3]. Prior to that, the residents of “Cascade” for several months hung out huge white-red-white flags in the yard. Each time they were taken down by the police. This time the panties lasted a day.

On this day, the “Cascade Live” Telegram channel reported calls with a request to take off the panties. Interestingly, it was not ordinary people who called the police, but the Frunzenski district administration called Ministry of Emergency Situations.

“However, even the most narrow-minded Emergencies Ministry officials refused to do this, fearing lifelong disgrace from their own colleagues[4],” the Telegram channel said. 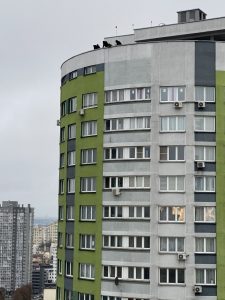 On November 10, a squad of five riot policemen, as well as employees of the Ministry of Emergencies, arrived at the “Cascade”. They climbed up to the roof and used a large hook to try to remove a panty stretch hanging on the level of one of the upper floors. However, the tenants of one of the apartments managed to save the panties by dragging them through the window into the house. As a result, the security forces left without “prey”, and the next day the panties were hanging in the same place again[5].

“They were breaking into several flats in our house at once, conducting searches, which were very lengthy. They promised not to take anyone away, but in the end they detained one girl. It is noteworthy that our neighbours were not allowed as witnesses – they had their own witnesses, whom we do not know”, said a local resident[6].

It is significant that the authorities came to the very residents who were election observers.

At about 11.00, the residents of the quarter managed to capture how the security officials took off underpants hanging over the residential complex. They took the stretcher with the underwear with them[7]. 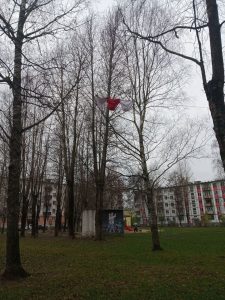 By the way, on the same days residents of Vitebsk organized a similar flash mob with pants. On November 10, the Telegram channel “Vitebsk incredible” posted a photo with white-red-white underpants hanging on a rope between trees. “Vitebsk knows how to dry underwear,” the caption under the photo said[8]. 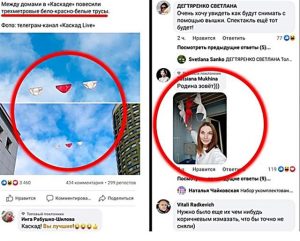 And Facebook users shared creative underwear “pickets” in the comments under the post about the white-red-white pants. For example, on November 9, Tatyana Mukhina posted a selfie against the background of flag-colored bras and signed: “The Motherland is calling.” 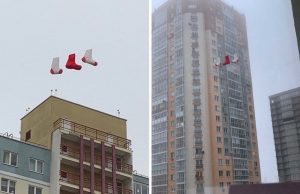 On December 6, residents of the “Arcadia” residential complex decided to repeat the Cascade flash mob – but instead of panties, they hung out huge white-red-white socks. The photo appeared in the Telegram channel of the Onliner portal. Whether the forces of the Emergencies Ministry were involved this time is unknown[9].

“It seems to me that they will try to stipulate in a law or a decree in some cunning way that hanging colourful pants on the balcony in a certain order and wearing trousers with white-red-white stripes will be considered as a criminal offence”[11].

Monitoring of “Our House”, dedicated to repressions against clergy and believers of different confessions
2021-02-24 at 16:23 Svetlana Gordeeva Defence and Solidarity (ZiS)