Children like New Year’s holidays more than adults. This time is associated with miracles, gifts, vacations, sweets. And all over the world, children are waiting for this to dance around the Christmas tree, watch fabulous performances and movies, eat tangerines and chocolate. And only in Belarus, the New Year for children turns into a lesson of patriotic education and love for Lukashenka. 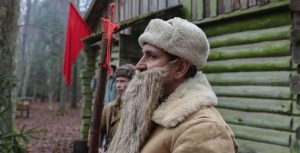 The strangest Santa Claus in Belarus lives in Khovanshchina, Ivatsevichi district. There is a memorial complex of partisan glory. The magic character usually looks like an old man in a red caftan and beard. Santa Claus from Khovanshchina has a beard made of oakum, and his sheepskin coat belted with a belt with a holster and a hat with earflaps with a star. As an entertainment, the New Year’s character offers a quest, “Intelligence is looking for a partisan Santa Claus”, where visitors transform into scouts and perform tasks. In the memorial complex, you can decorate a Christmas tree – the symbol is decorated with garlands of shells, flags and pieces of red cloth. And the most noticeable attribute on the Christmas tree is a parachute with a load. And Santa Claus has prepared a symbolic gift set for children – a paper bag with gingerbread, lollipop, apple dries and two walnuts. In the time of II World War, such sweets for children were a long-awaited and surprising gift. The illegitimate government is proud of the victory in the Great Patriotic War so much that from childhood, it teaches children to hardships and life according to the laws of wartime. It remains only to ask: is this how the winning states behave?

The Soviet Union also glorifies the museum of the poet Petrus Brovka in the capital. The Literary Museum has prepared a festive program for the children. They are invited to visit the museum of the national poet and enjoy the atmosphere of the New Year of the Soviet era. Let’s clarify that the USSR collapsed more than 30 years ago, and those who were born in the year of its collapse already have their children. For modern children, the Soviet Union is something archaic and distant. But Lukashenka and other officials, state media journalists continue to remember the USSR with trepidation in their hearts. “What nonsense to read now about the fact that the Union died because of low oil prices. How much did oil cost during the war in the 1930s? Yes, she was not a serious commodity at all then. And in the 1980s, we had a developed industrial economy. We had timber, diamonds, gold, production of everything from Energia-Buran missiles to aeroplanes. And everything was destroyed, was sawn, was sold, was stolen,” propagandist Grigory Azarenok says. 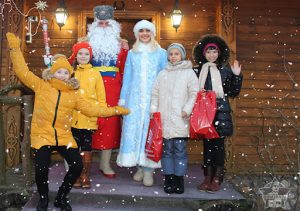 A children’s holiday with a military bias will also be held on the “Stalin Line” – a historical complex on the site of the fortifications of the Minsk fortified area, built to protect against Poland in the 1930s. The New Year with shooting and martial quests has traditionally passed in the complex for several years. Children get offered to go through an obstacle course, take a picture in a military uniform and shoot with pneumatics to get a prize. Santa Claus is here too, and also with an army bias. Dressed in a fur coat with an astrakhan collar and a hat with a bright star, he greets the guests in winter. 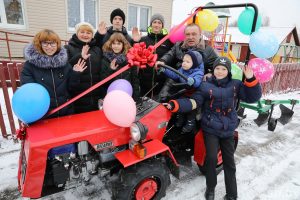 For more than one year, officials, representatives of state organizations and law enforcement agencies have become New Year’s magicians. Lukashenka has been holding the “Our Children” campaign for several years, within the framework of which adults come to visit orphans and bring gifts and performances. However, these gifts can be somewhat strange. The children from the family-type orphanage in Rossony district received a tractor this year. It was presented to them by the Vitebsk Regional Council of Deputies chairman, Vladimir Terentyev, the head of the Main Department for Education of the Vitebsk Regional Executive Committee, Dmitry Khoma, and the district leadership. In addition to the tractor, trailed equipment got delivered to the family–type orphanage – a specific three-body plough. The gift was explained by the fact that the children like to tinker with vegetables and fruits in the garden, which means it’s time to expand allotments. But after all, the duties of children are to learn and develop. A reasonable question: will they have time to do their homework and attend interest associations if they need to help parents-educators cultivate the land? And aren’t they being used by adults as free labour? 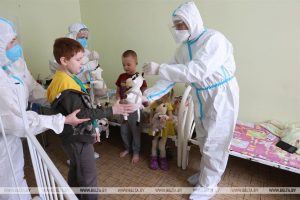 In 2020, the Council of the Republic member, Doctor of Medical Sciences, Professor Yuri Derkach, congratulated the Vitebsk Regional Children’s Clinical Center patients. Gifts for the children were purchased by the company “BelVitunifarm”. However, there was not enough money for more than an ordinary soft toy. And it seems to us that much more hospital patients need fruits and vitamins to get better faster, as well as attention and positive emotions. 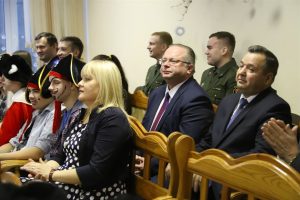 In 2020, boys and girls in orphanage No. 3 in Minsk were congratulated by representatives of the State Control Committee. More than 60 pupils from 3 to 15 years old live in the orphanage, and 35 schoolchildren are among them. The children are biological and social orphans, and some have mental illnesses and disabilities. The Department of Financial Investigations employees, at the expense of personal funds, bought 25 children’s scooters and sweet gifts for the wards. Scooters are not enough to even for all schoolchildren. And we remind you that largely thanks to the Department of Financial Investigations, the list of Belarusian political prisoners is being updated. Right before arriving at the orphans, the DFI arrested the employees of Press Club Belarus. And there is no doubt that the department specialists were paid bonuses for this. But these bonuses are not enough even to buy gifts of equal price for each pupil.

Last year, the Minister of Education, Igor Karpenko, visited the Krivichi specific school of a closed type. Talking to his students, the minister did not forget to mention that the children who are here are guilty: “Unfortunately, fate has decreed that you are here today. At the same time, this is an extra reason to think about what kind of life path you will choose for yourself. I sincerely wish you to have your own business, which you would be ready to serve throughout your life, to work, to work for the benefit of your families and the country.” But the students of this institution are already working for the country without receiving a penny for it. In 2014, eleven minors escaped from the Krivichi specific school, and in 2017 – six teenagers. We talked about the underside of life there and other similar institutions here. 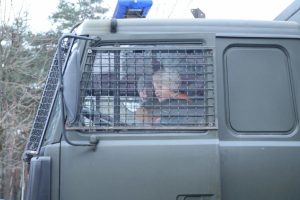 An unforgettable holiday was organized in 2020 for orphans by the Minsk riot police. Company commander Dmitry Balaba came to visit the pupils of the Radoshkovichi boarding school. In addition to the New Year’s performance and the traditional presentation of gifts, the children were shown special equipment displayed on the parade ground, given weapons to support and treated to soldiers’ porridge. According to riot police officers, a first-grader from the Radoshkovichi boarding school said that he wanted to see special equipment and hold real weapons in his hands. Children have seen the unit, have tried on helmets and bulletproof vests, have held shields and batons in their hands. Among the 30 young guests were children who got into a difficult life situation. There is a feeling that government prepares orphans to beat peaceful people in adulthood. 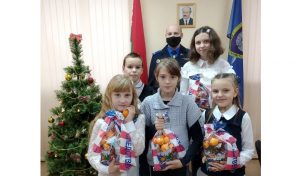 And employees of the Senno district Department of the Investigative Committee in 2020 invited five children from low-income families to visit them. They conducted a building tour, presented gifts, prepared riddles and organized a sweet table. Everything would be fine, but the Investigative Committee is not the best place for a children’s holiday. A different contingent is brought here: patients, drug addicts and alcoholics, people with mental disabilities. Are such meetings pleasant for children, and do they need them at a young age? 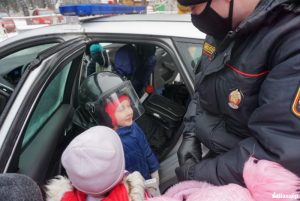 In Soligorsk in 2020, employees of the local department of the Ministry of Internal Affairs Security Department visited the sanatorium nursery No. 1. In addition to fun games with a service dog that performed all commands and searched for lost mittens and hats, children were able to get acquainted with the work of the Department of Security Department. The guys were able to sit in the salons of police cars (where criminals get transported), turn on flashing beacons to the shrill sounds of sirens. Kindergarten students tried on helmets and bulletproof vests, besieged a sliding ladder and touched service weapons. 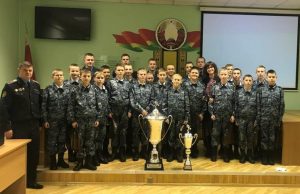 And the pupils of the Ministry of Internal Affairs specialized lyceum on the New Year’s holiday had the opportunity to observe the detention of criminals and practice techniques to disarm them. Boys 12-13 years old, who have not yet decided on their future profession, were invited to the Partisan Department of the Ministry of Internal Affairs Security Department in Minsk. Here they were given a tour, a conversation about how important it is to study well and play sports. The teenagers received souvenirs as a keepsake. 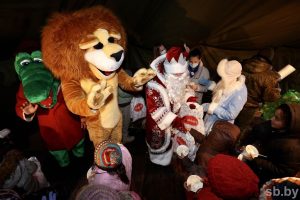 This year, refugee children from Asian countries took part in the “Our Children” campaign. They continue to be located in the logistics centre “Bruzgi” on the Belarusian border. On December 15, 2021, fairy-tale heroes came to two hundred children. Santa Claus, Snow Maiden, animators, life-size dolls talked with the children and gave them sweet gifts. The action got organized by Belarusian state public organizations. “The action “Our Children” is taking place in the country. And these children are not strangers to us. We have prepared a gift for each of them. Thus, we are trying to brighten up the lives of these children somehow, to bring festive colours into it, to cheer them up. We also want to introduce them to the culture of celebrating the New Year in our country,”Irina Korol, a representative of the Minsk city organization of the Belarusian Union of Women, said. Migrant children were not shown performances with detentions of criminals, service dogs. They were not given one small toy to each, were not loaded with ideological sermons and stories about the best in the world of Lukashenka were not taught to love the Soviet Union, but organized a full-fledged holiday.

Everyone expects miracles from the New Year and Christmas, especially children. And the disappointment that the holiday turned out to be boring will surely be remembered by the child for a long time. It is much more significant for children to receive attention from adults: a performance, an interactive meeting where children take on the role of interviewers, games and competitions. But instead, the guys are taught to endure hardships, mock others for their political views and tell that Lukashenka protects our country from enemies known only to him. It is unlikely that children will begin to respect the dictator after such stories – they will hate him when they realize that he has deprived them of gifts, childhood and holidays.