On September 13, a protest march was held in Brest, in which about 4 thousand people took part. At the intersection of Masherov Avenue and Cosmonauts Boulevard, people lined up in a round dance, sang songs and danced. Because of this, traffic was stopped. The protesters were dispersed with a water cannon; a criminal case was opened against them, which has not been closed so far.

What happened on September 13

On that day, protesters gathered around 2.30pm near the monument to the city’s 1,000th anniversary. Here the demonstrators stood with flags and chanted “Long Live Belarus”. Then they went in a column along Sovetskaya Street in the direction of Mayakovskogo Street. But this time the column did not go to Lenin Square, but headed towards Masherov Avenue. 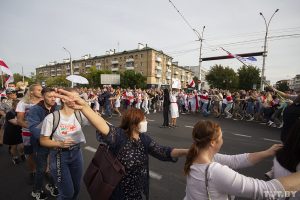 On Masherova Avenue, protesters took to the road and walked in the direction of Kobrin Bridge. At the crossroads with Cosmonauts Boulevard, they stopped and began to chant: “This is our square.” As a result, cars could not pass through the intersection, and public transport stopped. 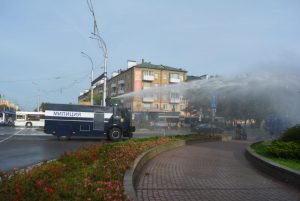 The demonstrators organized a round dance, began to sing protest songs and dance. This went on for about 40 minutes, and then, at 17.00, a water cannon drove up. As a result, people fled. The special transport poured water on the road and flower beds, wetted several protesters and left[1].

Progress of the investigation

The Interior Ministry said that “about a thousand people in the center of the intersection played round dances, sang songs and shouted various slogans. By their actions, the participants in the unauthorized mass event blocked the movement of public transport, created a real threat to the safety of road traffic to other participants[2]. ”

On September 15, a criminal case was opened under Part 1 of Art. 342 of the Criminal Code – the organization of group actions that grossly violate public order and are associated with obvious disobedience to the legal requirements of government officials or entail disruption of transport, enterprises, institutions or organizations, or active participation in such actions in the absence of signs of a more serious crime. A group of 14 investigators was involved in the investigation, and the defendants were everyone who could be identified from the photo taken from CCTV cameras[3].

According to the investigation, because of the “round dance case” traffic was restricted from 16.20 to 17.45 along Masherov Avenue from Lenin Street to the Kobrin overpass; from 16.45 to 17.25 along Cosmonauts Boulevard from Budyonny Street to Masherov Avenue, along Shevchenko Boulevard from F. Skaryna Embankment to Masherov Avenue. The movement of the routes of the “Trolleybus Park” also stopped, as a result of which the total downtime was more than 29 hours. Routes were halted and 2 trips of Brest Bus Park public bus transport were disrupted, resulting in a total downtime of more than 5 hours and over 26 km of mileage not covered. Finally, the movement of two routes of express communication of urban passenger transportation in regular traffic was stopped for 5 minutes[4].

Already on September 28, about 20 people became involved in the case, and the security forces stated that their number could grow to 200. By December 21, more than 50 people were involved in the case – 19 suspects, 37 accused. The first ten accused were tried on January 20, the second was tried on February 15.

On December 30, the prosecutor’s office of the Brest region sent to the court the materials of the criminal case against 10 residents of Brest, who were accused under Part 1 of Art. 342 of the Criminal Code[5]. On January 25, the court received another case on the riots on Masherov Avenue and Cosmonauts Boulevard – there were also 10 accused in it[6].

Defendants and suspects in the “round dance case” 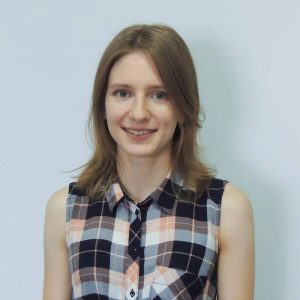 On September 23, a suspect in the “round dance case” was arrested – a 25-year-old teacher from Brest Marina Glazova. She was invited to a conversation at the Leninsky ROVD, then at the Investigative Committee. As a result, she first ended up in an detention centre, then in a pre-trial detention center. Marina’s apartment was searched, and her parents were not allowed to visit their daughter for more than a month[7]. On October 7, Marina was recognized as a political prisoner, and in November she was released under house arrest. 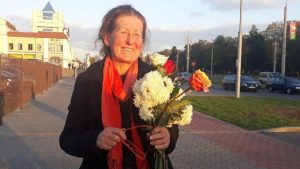 On October 27, a 63-year-old activist from Brest Elena Gnauk became a suspect in the “round dance case”. The charge under Part 1 of Art. 342 of the Criminal Code was presented to her on January 17 – the corresponding document was handed to the activist on January 15 at the department of the Investigative Committee for the Brest region.

“I don’t think that expressing my position by dancing is a criminal offense[8],” said Elena Gnauk. 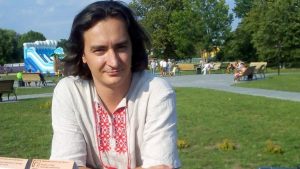 On the evening of November 16, a search was carried out in the apartment of Brest activist Viktor Klimus – he is also suspected of the “round dance case”. He found out about this two weeks before – they were looking for him from his parents and father-in-law. During the search, two white-red-white flags and an old computer were taken away from Viktor’s family[9]. 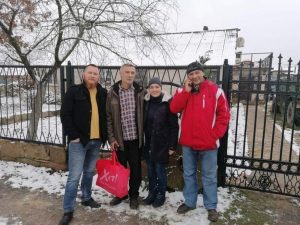 On November 30, a poet and beekeeper from the village of Linovo, Pruzhany District, Nikolai Popeka, was detained. Friends said: Nikolai often came to Brest to visit one of his sons. In the Leninsky District Department of Internal Affairs of Brest, he was interrogated as part of the “round dance case”. The man refused to testify against himself and demanded that the documents be kept in Belarusian. Nikolay Popek had to spend three days[10] in jail.

32-year-old spouses Andrei and Polina Leshko were also suspects. On September 13, they were close to the main events. They were attracted to the case based on photographs from the local media and other people’s social networks, and were also identified by video. On 21 September Pauline was looked for at the state enterprise where she worked before her maternity leave, and on the same day she was interrogated without a lawyer, and the interrogation was conducted in a rude manner. Because of the prosecution, Andrei – the sole breadwinner of the family – lost his income. He worked as an international driver and was banned from leaving the country. The couple has two minor children under their care.

The first court session on the “round dance case” took place on January 20. On that day, the first ten defendants were tried, including Marina Glazova. The accused are between 20 and 38 years old. Among them, in addition to the teacher, were two IT specialists, two loaders, a director of a private company, a shift supervisor at a trading company, a bank employee, temporarily unemployed and a third-year student at the philological faculty of the Belarusian State University. 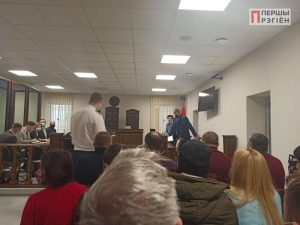 Nikolai Fedorenko, an employee of a trading company, was resting with a friend that day in one of the cafes at the intersection of Karbyshev and Mitskevich streets. A column of demonstrators passed by. He also decided to walk with them. When people came to the intersection of Masherov Avenue and Cosmonauts Boulevard and began to dance, he remained on the sidelines. He recalled: it was fun, people were singing songs, laughing, clapping their hands. There was no negative. Although Nikolai was aloof from the round dance, he still became an accused.

Loader Vitaly Litvin joined the action out of interest – the march was reminiscent of a holiday, which hasn’t happened in the city recently. He stood in one of the parts of the round dance, not thinking that it somehow interferes with the traffic.

“It looked like a carnival. Everyone was happy, there was no negative. On the contrary, support, mood, smiles,” Vitaly recalled.

Yaroslav Yaroshuk learned that there will be a protest action in the center of Brest from the Telegram channels. When the column stopped, he crossed the intersection and stood on the sidewalk, began to shout and clap his hands.

“I have not seen radical people, people have not said to make barricades, they have not shouted slogans. People themselves took care not to interfere with anyone. They tried to squeeze in. I did not take any action to harm,” said Yaroslav.

Yevgeny Kolpachik was also in the center that day: he drank coffee, saw a crowd of people and joined them. The convoy stopped at the Cosmonauts, he crossed the road and saw the traffic police patrol cars.

“I thought it was all allowed, and went down to the road. I saw a round dance. I wasn’t in the vicinity. About 15-20 meters away. Clapped because the music was playing. When I heard the siren, I walked away and went home,” the accused said at the trial.

Viktor Denisenko was standing at the Central Department Store when he saw a column of people. He wanted to walk along Sovetskaya Street, but did not dare, went the other way. When he saw the crowd approaching, he decided to walk with them to the bus stop. On Masherov Avenue, he saw a water cannon and went behind a bus stop, where he was apprehended. 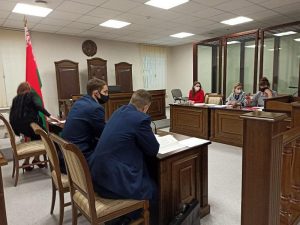 Maxim Zharov was also detained on 13 September. He also joined the column of protesters and reached the crossroads, but stated that he did not take part in the round dance, did not clap, did not shout slogans and soon went home.

During the first hearing, four out of ten who were in the dock admitted their guilt in full. Four more did not plead guilty. Two admitted partially[11].

At a court hearing on 15 February, the court heard the second dozen defendants. Musician of the group “Give the Way” Yuri Stylsky came to support them.

Alexey Artetsky said that out of curiosity he came to watch the round dance. He stood on the roadway with a flag, but did not shout any slogans. Then he rolled up the flag and went to the store. The state prosecution and the court clarified whether his actions interfered with the work of trade objects – stalls, to which Alexey replied that he had bought cigarettes and water.

Dmitry Kachursky said that the column was moving along the sidewalks and along the roadway shouting “Long live Belarus!” and “This is our city.” He clarified that the shopping facilities were working, which means that the protesters did not interfere with this process.

Another defendant, Dmitry Bunevich, was traveling with his brother from the guests when the bus stopped and the driver said that there would be no further movement. They got off the bus, took pictures in front of the crowd, and at that moment a water cannon arrived. 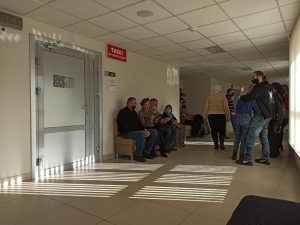 Some of the accused were asked if they had been offered money for taking part in the round dance. Sergei Nalivko said that he was not offered, and clarified that the traffic police did not ask people to leave the sidewalks, and the police did not announce that it was necessary to disperse. By the way, several of the accused said at once that they did not know that they needed to disperse, that their actions violated public order, since no one had warned them about it. At the same time, everyone admitted that it was wrong to enter the roadway.

The accused Valentina Zhukovskaya drew attention to the fact that she does not consider entering the carriageway and the round dance at the intersection a violation:

Of the ten defendants, only one fully admitted guilt[12].