On January 29, 2021 “Our House” submitted the necessary documents to the General Prosecutor’s Office of Lithuania to initiate a criminal case for torture and abuse against D. a citizen of Belarus.

This is what happened. On September 13, 2020, D. was driving his car with also some passengers, returning from a protest march, which took place in the area of ​​Pobediteley Avenue. There were no symbols on the outside of his car. At one point, they noticed that dark blue Ford vans without license plates were driving behind their car. They turned at the next intersection, D. saw them again, but considered it to not being important.

When they drove up to the intersection of Timiryazeva Narochanskaya streets in Minsk, a traffic police officer was standing there, regulating the traffic. The traffic light at the intersection did not work. D. stopped and waited for the traffic controller’s signal. Through his rear-view mirror D. saw the Ford vans, that turned the same way as him earlier, approaching the car. They stopped next to the car and a little bit behind him. Their doors opened and people in dark clothes jumped out. They didn’t wear any special uniforms like the police. They were dressed in olive green, masked and had black caps on their heads. They immediately struck, not saying anything, they attacked the car, started hitting it and tried to pull the handles.

D. locked the central lock of the car so the doors couldn’t been open from the outside. The peaceful people inside the car were very afraid as was D. So he instinctively stepped on the gas and tried to get out of the attack. An unnumbered Ford pursued the car, then police cars with flashing blue lights joined the chase.

As soon as the driver saw the police, he stopped immediately, but this did not save him and the people in the car. They were severely beaten. There were puddles of blood on the asphalt, the car windows were broken. D. himself had a punctured head, blood was running down his face. His nose was broken (nasal septum fracture), his body was full of hematomas and other injuries. 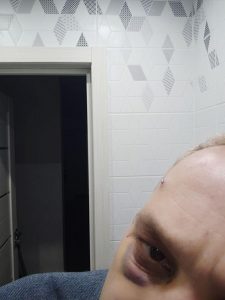 After being severely beaten, they were taken to the ROVD, where no medical assistance was provided. As a result of the brutal detention and beatings, D. suffered a concussion, a head injury, bruised wounds on the nasal dorsum and the left knee joint and a fracture of the bones of the nose and nasal septum. 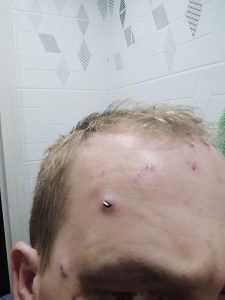 As it was already found out, Igor Shkut, senior inspector of the road patrol service of the traffic police of the Internal Affairs Directorate of the Minsk City Executive Committee, took part in the torture and cruel detention of the peaceful people.

It should be reminded that more than 1000 complaints of torture and bullying by police officers have been submitted to the Investigative Committee of Belarus, but not a single criminal case has been initiated so far. Also, no criminal case has been initiated into the brutal murder of artist Roman Bondarenko by people close to Alexander Lukashenko.