The “Round Dance Case” in Brest is one of the biggest politically motivated criminal cases in Belarus. Since August, 2020, Belarusians have been using various form of protest. Unfortunately, most of them have brought the participants to defendant’s benches.

Every hearing of every loud case demands particular attention, and this is how Our House obtains the truthful overview of repressions and the truthful statistics covering thousands of broken lives. This is how we will be able to prove the crimes of the regime. In this report of Our House, you can learn about the results of first trials of the “round dance case” in Brest, as well as about what happened in September, 2020 that made people defendants in that case.

On September 13, 2020, a protest march took place in the city of Brest, about 4000 people took part in it. At the crossroads of Masherau Ave. and Cosmonauts’s Blvd. people formed a round dance, they danced and sang songs.

Because of that, the movement of transport was stopped. Later people were dispersed with jets of water thrown by water cannons. Then the enforcers began detaining the citizens. The Investigation Committee opened a criminal case under Article 342 of the Criminal Code of the Republic of Belarus against the protestants.

The rubric “Defence and Solidarity” of Our House’s website provides numerous materials on the repressions that Belarusians are subjected to for their active civic stance. In the sections “Monitorings” you can find analytical materials on the pressing issues of Belarusians inside the country and abroad.

On September 13, 2020, the protestants gathered near the Millennium Monument around 2.30 p.m. They stood there with flags, chanting “Long Live Belarus!” Then the column of the protestants moved along Sovietskaya Street towards Mayakovsky Street, but on that day, they did not go to Lenin Square, but turned to Masherau Avenue.

In Masherau Avenue the protestants went out on the road and moved towards Kobrynsky Bridge. They stopped at the crossroads with Kosmonavtov Avenue and started chanting: “This is our square!” Because of that, vehicles were blocked at the crossroads and could not move, public transport also stopped. 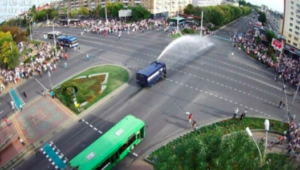 The protestants stood in a circle, began a round dance and sang protestant songs. That lasted for about 40 minutes, when a water cannon arrived at approximately 5 p.m. and dispersed the protestants.

The MIA reported that “about a thousand people danced a round dance, sang songs and shouted various slogans in the centre of a crossroads. Due to the actions of the participants of the unsanctioned mass gathering event, the movement of public transport was blocked, which created a real threat to the road traffic safety”.

Defendants and suspects in the “round dance case”.

The defendants are being tried in groups. As of May 17, 2022, 14 groups of defendants were convicted.

Currently, the number of the convicted people is 130, including:

In total they were sentenced to:

Why do “honest” Belarusian judges make their best to imprison defendants to the longest terms possible? The regime has been building a slave labour system for many years, and it needs new “staff”. New slaves. Our House wrote about that only a few years ago. It is great to finally be heard!

TRIALS IN THE ROUND DANCE CASE OF BREST. PART 1

The defendants were accused under Part 1, Article 342 of the Criminal Code of the Republic of Belarus (Organization of group actions that seriously harm public order and inherent in flagrant disobedience to the legitimate demands of the authorities or entailing disruptions in the work of transport).

On February 15, 2021, the trial of the second group of 8 residents of Brest took place.

The defendants were accused under Part 1, Article 342 of the Criminal Code.

The defendants were accused under Part 1, Article 342 of the Criminal Code of the Republic of Belarus.

The defendants were accused under Part 1, Article 342 of the Criminal Code of the Republic of Belarus.

Here we have presented the facts of the big criminal “round dance” case in Brest and showed the outcome of the trials of the first four groups of defendants, taking place in the period from January to May, 2021.

14 groups, 130 people convicted for opposing despotism and injustice. Months-long arrests. Men and women judged by corrupt representatives of the regime. Only one protest case and only one year in the life of a country, reflected in the materials of Our House. Statistics which cannot be ignored and cannot be argued with. Dates and numbers talking about the crimes of the regime. Dates and numbers that will once become proofs at other trials, that will be indeed honest and fair.