In February, we talked about the Brest “round dance case”. Recall that on 13 September, protesters formed a round dance at the intersection of Masherov Avenue and Cosmonauts Boulevard in the regional centre. As of February 24, 37 people were involved in the “round dance case”, and less than a dozen of them pleaded guilty. The trials of those involved in the case are still ongoing, with the defendants receiving harsh sentences. We talk about what is happening with the case now, who is being tried and what sentences are being passed. 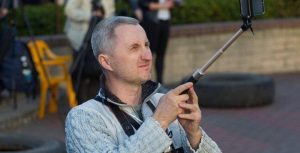 Because of the “round dance case” on 26 February the police searched the office of Andrei Kukharchyk, editor of the regional news portal “Virtual Brest”. This site published information on the “round dance case”, photos and videos from the protests. The editor said that his phone, computer, and a couple of old hard drives were seized from him. According to him, the Investigative Committee explained that the search was connected with the “round dance case”.[2]

On March 15, the verdict was announced to the second dozen of the accused. Here the judge was already more severe and sent several defendants to the colony. Alexey Artetsky was sentenced to one and a half years, Dmitry Bunevich – to a year and eight months. Dmitry Abramuk and Vitaly Bryukh were sentenced to 2 years of restriction of freedom in an open-type correctional institution, and Alexei Baranovsky, Dmitry Kochurko and Vladimir Talatynnik were sentenced to one and a half years each. Gennady Misuta was sentenced to restraint of liberty without being sent to an open institution. Two more defendants, Valentina Zhukovskaya and Sergei Nalivko, were not sentenced, as they were absent from the hearings for health reasons.[3]

After the court hearings, the detentions in the criminal case continued. On March 24, police arrested a 25-year-old accountant who was also at the intersection that day. In the message of the Ministry of Internal Affairs it was said that “together with other protesters, the young man blocked transport, posing a threat to the safety of road users, and also shouted slogans, danced in circles and sang songs.”[4] 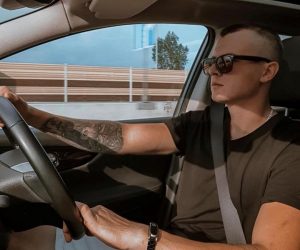 On the same day, 26-year-old regional TV presenter Konstantin Svidunovich was detained. Friends of the guy said that he was identified by a video in which he stands at the intersection of Masherov Avenue and Cosmonauts Boulevard in Brest. Konstantin did not agree with what was happening in the country and even looked for another job. He was sent to a pre-trial detention center for two months.[5]

On April 15, a new trial began over the accused in the “round dance case” – 14 people were brought before the “law”. Among them – one citizen of Russia, mother and daughter, well-known activist Elena Gnauk. Eleven of the defendants said they would not sit down until all the representatives of the independent press were allowed into the hall. As a result, after several breaks, journalists and interested spectators, who did not have enough seats, were allowed into the process.

The first judge listened to the Russian Danila Chemodanov, who as a child moved to Belarus with his parents and has a residence permit here. The guy has two higher educations, before his arrest he worked as a master of construction and installation works. Together with him, his girlfriend Maria Skokovets, with whom they were together that day on Masherov Avenue, is being tried. In the courtroom, she burst into tears and was not immediately able to testify.

Yuri Chubrik, an orthopaedic trauma surgeon in a private medical centre, said that 13 September was the last day of his holiday and he and his wife went into town in the afternoon to do some shopping. Leaving shopping centre, Yuri saw a column of people and, in a fit of curiosity, decided to join them. Yuri works at a rate and a quarter and accepts 70-80 people per day.

Another accused, a student of the Faculty of History Kirill Lud, was walking in a nearby park that day, but then decided to go to a mass rally: “I don’t admit that I committed deliberate actions in a group of people, I didn’t know anyone there. I do not understand, I am perplexed, I am absent-minded, why they want to stigmatize us as criminals. Yes, I took part in an unauthorized mass event, but this is an administrator under the former article 23.34.”

Student Vladislav Novitsky said that he had faced strong psychological pressure on him more than once. The police threatened that they would detain him and that he would be expelled from the university. And the investigator forced him to give evidence that he did not want to give. He was also threatened with expulsion at the university. The guy clarified that while studying at the gymnasium, he learned that the Constitution of the Republic of Belarus contains an article according to which people have the right to peaceful protest.[6] 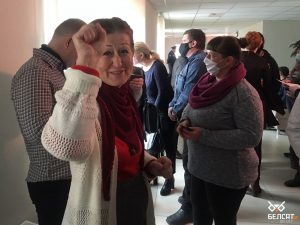 Of the fourteen people, only Danila Chemodanov pleaded guilty, who spent two months in a pre-trial detention center. Five more pleaded guilty in part. The other eight people disagreed with the charges. Elena Gnauk, an activist, said that the text of the accusation was written in a carbon copy. She demanded to send the case back to the Investigative Committee and concretize the charge to each defendant. Elena’s petition was rejected.[7]

On April 27, an appeal against the verdict of the second ten defendants in the “round dance case” took place. The judge of the regional court Sergei Berezyuk did not satisfy the complaint, and the decision remained unchanged.[8]

On the same day, April 27, the parties were debated at the trial of the third group of accused. The prosecutor asked for different terms for them – from restriction of freedom without being sent to an open-type institution to a colony. Elena Gnauk, Maria Skokovets and Vasily Chernetsky were offered 2 years of “home chemistry”. For Yuri Chubrik, Valentina Zhukovskaya and mother of many children, Lyudmila Lutskaya, they were asked for a year and a half of restriction of freedom without being sent to a correctional institution. Sergei Nalivko, Kirill Lud, Vladislav Novitsky and Rodion Kondratyuk (by the way, he was the only one who refused to testify) was offered to be sentenced to two years of restriction of freedom in an open institution. For mother and daughter Victoria and Elena Lyskevich they requested one and a half restrictions on freedom. Russian Danila Chemodanov was offered to be sentenced to a year in prison. The final verdict will be announced on May 7.

Colony and restriction of freedom are too harsh a punishment for a peaceful protest. We believe that all the accused do not deserve such sentences. The money that they were supposed to compensate for the damage to the Brest bus depot is unlikely to be seen by the workers and the transport of the park. The authorities are trying to force Belarusians to work for free to support the regime and feed the security forces. All this means only that the state has nothing to pay for the work, which means that its end is near.