On April 21 in Boris Nemtsov square in Vilnius, solidarity action with the Russian politician and political prisoner Alexei Navalny took place. Olga Karach attended the event, organized by activists of Belarus and Russia. 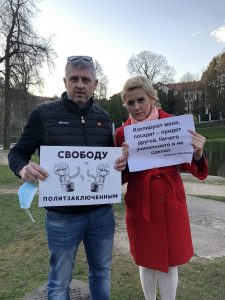 Headquarters of Alexey Navalny urged Russians to go to the streets of their cities on April 21 at 19:00. The day for holding the actions of solidarity with Alexei Navalny was not a coincidence: on April 21, Russian President Vladimir Putin made his annual official address to the Federal Assembly.

Events in support of Alexey Navalny took place in Russia and abroad. In Vilnius, solidarity action was in the square named after Boris Nemtsov, located near the Russian Embassy in Lithuania. Dozens of Belarusians, Russians and Lithuanians, holding the posters with the most memorable statements of Alexey Navalny, gathered here.

The event was moderated by Russian Mikhail Pulin, an activist of the Popular Resistance Association. He asked for political asylum in Lithuania in the summer of 2020: “I am happy that today there are so many Belarusian flags. We are not alone and are fighting together for our and your freedom”.

Sergey Bespalov, former coordinator of Navalny headquarters in Irkutsk: “I have four children. I want them to understand why their father once appeared in Lithuania. I want my 10-year-old son not to send me a photo of the summons”. 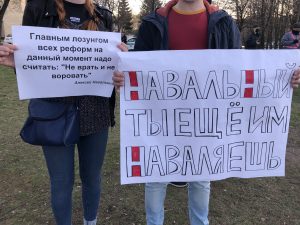 Natalia Kolegova, head of the public association “Dapamoga”: “We believe that democratic forces are not far off. We see how democracy is breaking through. Our faith and unification will surely give incredible results”.

Valdas Bartkevicius, Lithuanian public figure: “Putin has remained a bandit from the 1990s. While there are not so many Russians on the streets of cities, very soon they will all realize that they are being deceived”.

Veronika Mishchenko, member of the Narodnaya Hramada party: “I do not share the opinion that Russia is our enemy. We have two enemies: Lukashenka and Putin”. 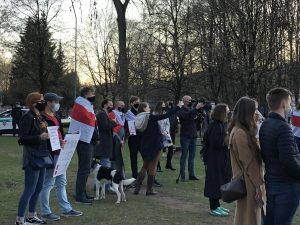 Bella Fox, the speaker of the People Embassy of Belarus in Lithuania, knows from her own experience what is a day of imprisonment for participating in protests in Belarus. She called on the audience to recall all the brightest slogans of the Belarusian Revolution-2020.

The Deputy of the Lithuanian Parliament and the PACE rapporteur on the circumstances of the murder of Boris Nemtsov Emmanuelis Zingeris also supported Alexey Navalny.

Olga Karach in her speech emphasized the dependence of the arrival of democracy in Belarus with the events in Russia:

“There has always been an opinion that Russia is experiencing repressive practices in Belarusians, that Belarus is a “testing ground”. After some time, I realized that in reality, everything is the other way around: Lukashenka visits Moscow, sees new repressive practices, returns to Belarus and begins to spread them. We all see that the same processes are going on in Russia and Belarus. The two regimes exchange innovative practices of repression. Today, Alexey Navalny, a man who was not afraid to return to Russia, is in prison. About 3 thousand people, accused and convicted for political reasons, remain in custody in Belarus. It is already clear that democracy will come to Belarus in one way or another through democracy in Russia. Belarusians support Russians in their struggle for democracy and human rights. We are against war. We want Russia to become a free democratic country. Freedom for Alexei Navalny, freedom for all Russians and Belarusians!” 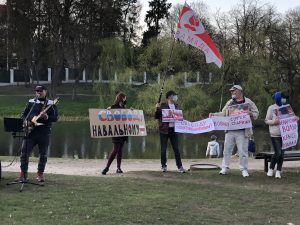 The music program of the event was organized by musician Sergei Kosmas, a close friend of political prisoner Sergei Tikhanovsky. The final chord of the evening was the general performance of the song “Razbury Turmy Mury”.

On April 21, residents of more than 150 Russian cities went to the central squares to support Alexei Navalny. The number of detainees exceeded 1.6 thousand people.