Almost two weeks ago, the Belarusians of Lithuania organized a tent camp near the Myadininkai checkpoint. During this time, more than a hundred people visited the makeshift town near the border. Pickets, including road closures, master classes, exhibitions, concerts are held here – and this is an unusual cultural event for the Belarusian diaspora. 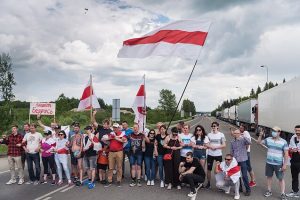 Pavel Latushko suggested holding solidarity actions near the border with Belarus, as the opposition leader planned to call on the EU to impose sanctions on Belarus. And Belarusian government was required to open the borders and release all political prisoners. The camp in Lithuania began its work on June 5, 2021, when a team of concerned Belarusians and Lithuanians arrived at the Myadininkai checkpoint, installed flags, posters, portraits of killed during the protests Belarusians, and a banner with demands. At the same time, the first pickets were held.

Soon, ordinary Belarusians and public organizations began to help the camp. Among them are ICCI “Our House”, the party “Narodnaya Hramada”, the public association “Dapamoga”, the foundation “Country for Life”. Every day, water, food, insect repellents, hygiene products are brought to the border, and garbage bags are taken away. Lithuanian border guards help with water and look after the order.

On June 6, 2021, protesters took to the road outside a tent camp for a few minutes in protest. The Belarusians attracted the attention of truckers and drivers who were travelling both to and from Belarus with posters with the words “STOP”, “You know what to do”, “Lukashenko is a terrorist”.

Another event was the arrival of actors from Grodno theatres to the camp. They came from Belarus under the program of “Our House” and with the help of the public association”Dapamoga”. On June 8, 2021, the stage figures came to the camp for the first time, and on June 14, they staged a performance, and every guest was able to see the brutality of the riot police. The musician Sergey Kosmos, who recorded the song “Razbury Turmy Mury”, performed on the stage of the tent town. 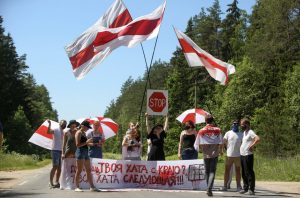 Through their efforts, the Belarusians brought light to the camp and began to connect sound equipment. With the help of ICCI “Our House”, the party “Narodnaya Hramada”, the public association “Dapamoga”, the foundation “Country for Life”, it was possible to obtain permission from the Lithuanian authorities to hold a roadblock. It took place on June 12, 2021. Dozens of guests of the tent camp took to the road with a wide 10-meter flag, which attracted the attention of truckers. Drivers studied to honk: “Long live Belarus!”, motorists in passenger cars and motorcyclists were allowed to pass under the flag. More than 80 per cent of truckers drove past the camp with smiles and a signal to support them. And some even whiled away the time in the queue, approaching the protesters. The tent city brought together drivers from different countries. 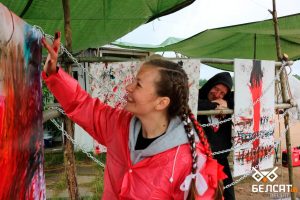 For the youngest guests of the camp, the Belarusians held a master class in painting. The children happily took up pencils and paper to draw hedgehogs in support of political prisoner Stepan Latypov. At his work, he often caught hedgehogs and told people about them: “When I’m sad, sad, I want to howl, scratching the wall, I remember what a high honour, what happiness I got – to be “your hedgehog”.” And shortly before June 1 and the tragic court session, Stepan sent letters to all the neighbours, who have children, and put homemade hedgehogs in envelopes. 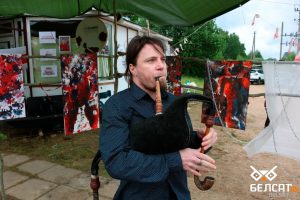 On June 13, the camp opened the exhibition “On the Border”. People could see the works created by adult residents of the tent town. There were no brushes – the paintings were created with fingers and palms. Bright abstractions decorated the camp. The opening took place with musicians Sergey Kosmos, Vyacheslav Krasulin, poet and video blogger Ales Krutkin. The Belarusians of Lithuania plan to hold a charity auction to sell the paintings. And the funds from it will go to support the repressed journalists. 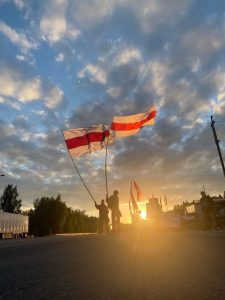 The camp continues to work to this day, despite periodic rains, cold and hot weather and the fact that the Polish and Ukrainian sides have stopped protests at the border. Soon, another action with the blocking of roads is planned. “It is clear that absolutely all drivers of heavy trucks are aware of the overlap, and most of them are ready for it. On the radio, on their waves, there are “battles” on political topics about who is right, who is guilty, and what to do”, the camp residents say.

ICCI “Our House” supports the Belarusians of Lithuania, who continue to protest in the camp on the border. The relocated, who support the tent city, have survived torture in Belarus and are eager to return to a peaceful country, not a concentration camp. We thank everyone who attends the tent camp, brings food and things, organizes events. And we hope that our actions will help us to cross the border with Belarus faster.