On August 12, the head of the ICСI “Our House” Olga Karach and the Ambassador Extraordinary and Plenipotentiary of Japan to Lithuania Shiro Yamasaki met. 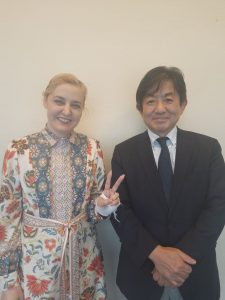 First of all, Olga Karach thanked Japan for the support and assistance provided to Krystsina Tsimanouskaya. The Japanese government provided full assistance in resolving the situation so that our athlete left Japan safely. The entire world community understood what awaits Krystsina in Belarus — the dictator does not forgive people who have their position and are not afraid to express it. Even if public statements are not directly related to politics, the opinion of the illegitimate government undermines its authority.

Olga Karach and Shiro Yamasaki also discussed the current situation in Belarus, the constitutional reform that the Kremlin is actively promoting. They talked about steps that should be taken now to accelerate the departure of Lukashenka and the formation of a democratic society in Belarus.

Olga drew attention to the fact, that today’s opposition will still have to restructure to regain its authority within Belarus. Of course, Belarus needs international support and sanctions, but sanctions are an additional tool of influence. It is not the only and not the fundamental mechanism for overthrowing the regime.

According to Olga Karach, the Belarusian people will very soon have to make a decisive choice, and the Belarusian protest is becoming geopolitical. We should decide between becoming a part of the Russian world and being a part of Western civilization. It will not be possible to maintain neutrality because elections in Russia will be held in September, and it will be actively included in the Belarusian agenda.

Shiro Yamasaki asked about the work of the ICCI “Our House”, especially inside Belarus. He was informed about what “Our House ” does for Belarusians who left the country because of repressions. Olga told about the difficulties faced by the volunteers of our organization. Special attention was to Yulia Goryachko, a human rights activist and volunteer of “Our House”, who was arrested and recognized as a political prisoner.

Olga thanked Japan for the systematic support of the people of Belarus, presented Mr Yamasaki with a “dream catcher” in a white-red-white colour scheme and wished him to have wonderful dreams about our country, free and democratic in future.

Olga Karach’s official page got a blue checkmark on Facebook

Olga Karach writes to the Lithuanian Seimas about the problems of Belarusian refugees
2021-08-16 at 01:01 Svetlana Gordeeva News