The famous Akrestina Lane in Minsk is known not only for the centre of isolation of offenders, where adults are tortured who got here for white and red curtains. Next door is the same prison, but this time for children. And not only young offenders get here, as they write in the state press, but also children of refugees from other countries who are detained for illegally crossing the border. By the will of fate, they find themselves in a “children’s” prison. 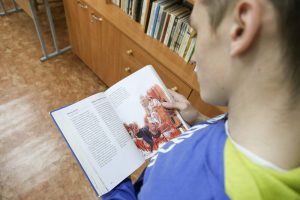 The distributor on Akrestina is the only place in the country where minors are detained for minor offences like drinking alcohol, theft, hooliganism, being on the street after 23.00 without adults, vagrancy. But there are also more serious criminals: for example, a girl who strangled a classmate. And some have not even reached the age of responsibility (schoolchildren up to 14 years old), children who have lost their parents, children of illegal migrants. According to the law, they live here for no more than 60 days. In some cases, the period can be extended. The receiver is waiting for a trial and subsequent sending to a special school for re-education or boarding school, medical institution, needs to be readmitted to his homeland.

The receiver, according to reports in the state press, is designed for 15 children. Here, as in any closed institution, there is a daily routine: wake up at 8.20, lights out at 21.00. In the first half of the day, the wards study, in the second – relax, watch TV, play board games. A psychologist talks to the children. There are also educators here. Children have books, toys, drawing supplies, and even a religious corner. Parents can come to their children any day, and if there is no opportunity – there is an option to call by phone. When the weather is good, children can take a walk outside. 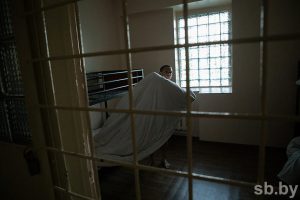 The children in the institution are provided with everything from underwear and slippers to bath accessories. It is explained by the fact that many children may have lice. You are not allowed to wear your own. Four bedrooms for boys and one for girls have bunk beds. There are no doors, but there is a lattice-like reminder of the prison. There are video cameras on the premises.

The food intake of the residents of the receiver-distributor takes place four times a day. The menu includes meat, boiled eggs, cereals, vegetables, dairy products, even sweets. In the programs from parents, you can take yoghurts, pastries, fruits. Not only relatives come to visit the children, but also volunteers, athletes, artists, representatives of the police and the Ministry of Emergency Situations. But all this is just a beautiful picture…

Violations of children’s rights in the receiver-distributor

In 2019, the ADC “Memorial” told about violations of the rights of young migrants in the receiver-distributor. Even in the Chisinau Agreement (2002), it appears as a “transit institution” through which the return of foreign children to their countries of origin and the return of young Belarusians from other countries to their homeland is carried out. While many CIS countries have humanized the transit of children and reformed such facilities, or even completely abandoned them, there are still receivers-distributors under the Ministry of Internal Affairs in Belarus. 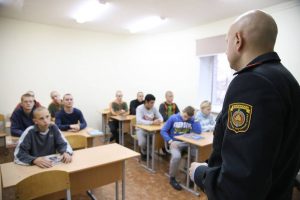 There are known facts of children from Russia, Ukraine, Vietnam, Syria and Afghanistan getting into the receiver-distributor. In the report of the ADC “Memorial”, it was pointed out that foreign children in the centre are deprived of freedom because of migration status. Here they are in danger from other pupils – children who have committed a crime, or children with mental disabilities who cannot control themselves.

Children stay in the receiver-distributor for up to 60 days. This period does not include quarantine, possible illness, the time of consideration of the complaint, or protest of the prosecutor, or the court decision on the further placement of the child in a closed institution. It is contrary to international human rights standards. The Joint general comments of the UN Committee on the Protection of the Rights of All Migrant Workers and Members of Their Families and the UN Committee on the Rights of the Child state that the detention of a child is unacceptable: 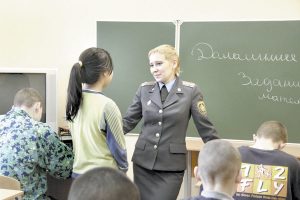 Incarcerating foreign children in a foster distributor is a violation of the fundamental postulate of the Convention on the Rights of the Child – the principle of the best interests of the child. For some reason, the best solution for this is to deprive a young foreigner of freedom – not by a court decision for an offence but based on the head’s of the internal affairs body or his deputy decision.

Other rights are also violated here, for example, the right to education. In the messages of the activists of the ADC “Memorial” the presence of lessons is questioned. The daily schedule includes only “classes on legal, moral and aesthetic education, household work; classes on labour training; self-preparation; conversations; sports”.

We told you above that minors in the reception centre cannot leave the territory on their own. In addition, educators conduct a personal search of children and their belongings. Everything that they receive in parcels from their parents is also searched. The situation is even sadder for migrant children: their parents often end up in the same receiver, but for adults, or in a terminal detention centre before finding out their identity and then being sent home (and this can last for several months). It means that even small foreigners cannot communicate with their loved ones. And that’s not all… 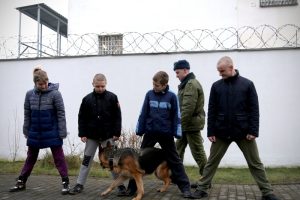 In 2017, a 17-year-old Russian, Daniil Galkin, told about the ill-treatment in the receiver-distributor. The guy is an orphan. He lived in an orphanage in Russia, ran away because of a bad attitude and came to Minsk. Here he was detained in the company of friends drinking alcoholic beverages (although he did not drink himself), taken to the Central Police Department, and then to the receiver – distributor. He spent twenty days here. Daniel said that for minor offences (half-eaten lunch, poorly made bed), teenagers were forced to squat, do push-ups, and if they refused, they had to wet a rag in water from the toilet and squeeze water into a bucket.

“If we cleaned badly, we played the game “special forces”. We lay down on the floor, it was impossible to raise our heads high, crawled on the floor and collected dust. You could buy off the punishment for bonuses – for work, good behaviour, staging some theatrical shows in front of employees, for reading and retelling books, ” the guy recalled.

It was not without physical violence. Daniil Galkin was the victim of a beating – an employee of the receiver knocked him to the floor and began to beat him on the kidneys for arguing over tattoos. Other teenagers also received blows:

“There was one guy who hit another in the lip. The guy was 14 years old, and Vitaly Alexandrovich (one of the employees) blew him with all his strength in the solar plexus. He collapsed and started vomiting. Then he was forced to kiss the person he hit in front of everyone and wash his underpants.”

The receiver called this story nonsense, saying that the teenager was dressed and shod here, and he left with thanks. The administration said that orphans stipulate employees many times because they are offended by fate. 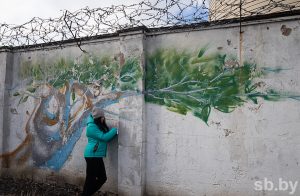 The receiver-distributor is an institution closed from prying eyes. Unlike pre-trial detention centres or prisons, independent observers, human rights defenders, and experts cannot visit it. It is not included in the list of institutions for visiting by public monitoring commissions. Reports of violations of children’s rights, including violence, cannot be verified.

In addition, children from disadvantaged families, orphans, who have no one to stand up for, often get into the receiver. No one will check the stories of a child about ill-treatment, especially in the current legal system of Belarus, where civil society is crushed.

In recent years, only a few materials about the receiver-distributor for minors were in the press. One – in the state newspaper “Respublika”, the second – on the website of the state agency “Minsk-News”, the third – on the website of the Belarusian branch of the Russian agency “Sputnik”, which is headed by the Russian pro-government journalist Margarita Simonyan. It is not surprising that none of the materials checked what happened to Daniil Galkin, and all three publications wrote about the receiver as a children’s camp.

The team of the ICСI “Our House” believes that it is necessary to stop keeping children and teenagers in such institutions, similar to a prison, only for the little ones. For a child’s fragile psyche, this is a traumatic experience. The staff of institutions do everything so that children are immersed in a marginal culture from the threshold and get used to the idea that they are criminals. It is quite the basis of the unspoken “policy” – Lukashenka does not need sensible young people, but slaves in prisons are much more profitable for a penny.