The state propaganda does its best to convince Belarusians that there is enough medical equipment in hospitals. The Brest Regional Children’s Hospital has received a video colonoscope of the latest generation. A CT scanner has started working in the Lepel central district hospital. And the Zhlobin hospital got two ultrasound machines, mobile oxygen stations, electrocardiographs and hemodialysis equipment. However, there are reports of disasters in hospitals in villages, district centres and the capital.

The equipment is not enough for everyone

In the spring of 2021, there were problems with computed tomography devices in the country’s hospitals now and then. On March 26, only three out of five CT machines worked in Brest. For uninfected patients, two devices were available. In the Brest oncological dispensary, the device broke down due to contaminated dust filters. And for some reason, the institution did not announce a tender for the purchase of new ones. The X-ray tube of the device located in the emergency hospital failed literally in two years, and in the city hospital, the device is already ten years old, and it could fail at any moment.

On March 31, the CT machine in the Soligorsk Central District Hospital stopped working. Residents of the city got a promise to make repairs shortly. The patients of the Minsk district Hospital also had no opportunity to be examined – the only CT machine broke down. There were two computer tomography machines in the Mogilev oncological dispensary, but only one remained in the spring. As a result, the examination in the oncological dispensary had to be stopped, since it was impossible to perform studies with contrast on the old device.

In April 2021, CT machines were broken in four hospitals with an oncological profile. And in the Republican Scientific and Practical Centre of Oncology and Medical Radiology, named after N. Alexandrov, in addition to this, the MRI machine and the linear electron accelerator were broken. It means that cancer patients are less likely to undergo a CT scan, do an MRI and get a timely diagnosis.

At the end of July 2021, the residents of Homel got deprived of a fluorographic examination. The fluorography machine broke down in polyclinic No. 8, and it is unknown when it will be repaired. A subscriber turned to a tuberculosis dispensary and found out that the coupons for fluorography were over. In another polyclinic, on Rabochaya Street, they refused to accept a city resident since there is “a limit”, which also ends very quickly. 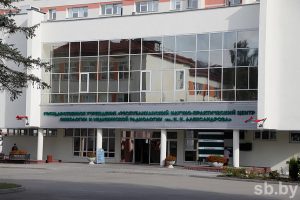 In August 2021, it became known that in the cancer centre in Borovlyany, patients cannot do an MRI with contrast enhancement – the only device was not working. Doctors note that after brain tumour removal, patients should check their health every three months. In August, Belarusian cancer patients lost this opportunity. Instead, doctors suggested that they sign up for November or have an MRI at their own expense elsewhere. The price of one examination is from $ 100 to $ 300. The average salary in Belarus is 583 dollars, and the minimum is 170 dollars.

Problems were also in Bykhov, where the X-ray cassettes ran out. The management of the local hospital admitted that they had not been buying them for a month. Patients from the district centre had to travel to Mogilev for X-rays, but they could not do a procedure since the X-ray was broken.

In October, there was news that there were problems with fentanyl in the Minsk anesthesiology and intensive care units. It is used for sedation of patients on a ventilator, more often – during surgical interventions. The supply of fentanyl in the departments is running out – specialists use the last. Other narcotic and sedative drugs are also becoming scarce. According to some reports, there is no fentanyl at all in the central warehouses throughout the republic. 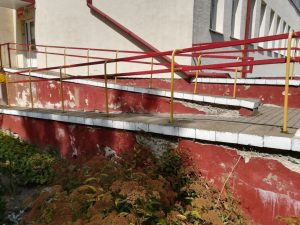 The situation in the regional centres is even worse because there is no fentanyl and even medical oxygen. For example, in Starobin, in the Soligorsky district, oxygen points have run out. There is nowhere to take patients, so they are treated at home, and in case of a drop in saturation, they are brought to the emergency room for a couple of hours to breathe oxygen and then released. Even patients from Soligorsk are taken to Starobin – there are no places in hospitals for them in the 100-thousandth city. At the same time, the hospital in the urban settlement is far from in the best condition: plaster and finishing tiles are falling off from the facade, and the sidewalk is in poor condition nearby.n

In 2019, Igor Tavtyn, the chief physician of the Svetlogorsk district hospital, addressed entrepreneurs, business leaders and ordinary people through a local newspaper. He asked for financial assistance to buy the necessary equipment for the hospital and carry out repairs, for which there is no budget money: “We have to earn ourselves. But it is not so easy to earn money to improve the situation. Therefore, this process is quite difficult and somewhat delayed in time. And hence the inconveniences that patients sometimes have to experience.” At that time, the hospital needed a laparoscopic stand, ultrasound machines, new ambulances. After that, Igor Tavtyn was fired. 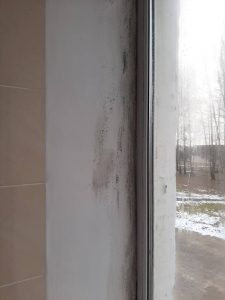 In May 2021, the Telegram channel “White Coats” of the Medical Solidarity Fund published photos of the hospital in Maryina Gorka. In the photo, there were windows, ceilings and walls of the institution, mildewed from dampness. Let’s clarify that even children’s wards are in this state. The hospital is not cleaned, the windows in the toilets are screwed up with screws. The situation is complicated by poorly made heating – batteries are constantly flowing in the hospital. “Our House” is inclined to believe these data because back in 2020, hospital nurses were ordered to make or buy a thousand masks at their own expense as soon as possible. And the doctors were not given anything at all.

In July 2021, independent media reported that they plan to spend more than 300 thousand dollars on the police building repairs in Borisov. At the same time, residents of the city claim that the CT scanner is constantly breaking down in the local hospital. It cannot withstand the load due to the coronavirus pandemic. Borisov residents who applied for explanations to the hospital administration said: they promised to fix the device no earlier than September because there is no money to start doing it earlier. 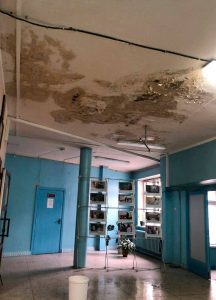 In September 2021, photos from the Minsk city oncological dispensary appeared in the Telegram channel “Housing and communal services 23%”. Its roof could not withstand the rain, and from this, brown streaks appeared on the ceiling, and the medical staff had to substitute buckets for dripping water. To clarify, on average, more than 36 thousand patients receive medical care in the Minsk Oncological dispensary, and surgeons perform about 11 thousand operations. More than 22 thousand people are undergoing chemotherapy at the dispensary, and almost 3 thousand patients are undergoing various types of radiation therapy. In 2020, a new building with unique equipment for radiation therapy appeared here. And they forgot about the old buildings. 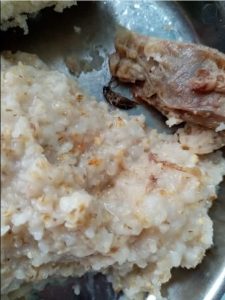 The situation in Vitebsk is no better– but rather much nastier. Here, cockroaches live together with patients in the surgery chambers of the regional clinical hospital. There are so many of them that they are served here as a meat dish for lunch. However, the same situation has developed in Minsk City Hospital No. 10.

A resident of Osipovichi, who was lying with a child in a local hospital, also provided shocking photos from a local hospital. Children are treated among peeling walls, mould, fallen plaster, and ants crawl in the wards. New plastic windows are inserted with huge cracks because the frame remains from the old glass ones. The bathroom is in a disgusting condition, where there is not even a modern washbasin. But hospitals have such a condition not only in Osipovichi but also in other regional centres. In Zhlobin central regional hospital, patients of the urological department have to wash in a peeling bathtub. The department is designed for 60 beds, but there is only one place where you can take a shower.

People come to hospitals to be treated, but it is not always possible. There have been cases in Belarusian healthcare institutions when patients were injured right there. In 2019, a 67-year-old patient of the 1st city hospital in Vitebsk, Raisa Lasovskaya, fell out of bed in the cardiology department. Here she was treated for atrial fibrillation, and in the end, almost ended up in traumatology. Raisa spent two weeks on the bed, and during this time, the wire managed to fall off from the furniture. But the nurse of the department just twisted it up and put two blankets on top. And in the evening, Raisa sat down on the bed, and suddenly she straightened up, and the woman was thrown against the wall and pressed against part of the bed. She was released from “captivity” by her neighbours.

– I probably cried for 30 minutes, my blood pressure rose, and I was shaking all over. The nurse gave me a blood pressure pill and a sedative. And the doctor on duty, I think, should have offered a picture of my head — it hurt me very much: what if a concussion? But the doctor only asked if I should be given painkillers,” Raisa Lasovskaya recalled later. She left the hospital for the emergency room. And the next day, the manager called her and asked if the patient wanted to continue treatment. Raisa refused. She clarified that there were cockroaches in the institution that fell on patients from the ceiling at night.

With the advent of the coronavirus, patients of Belarusian hospitals there, oddly enough, were in danger. COVID-19 patients enter healthcare institutions together with healthy people – as a result, healthy people become infected and get sick. And there are not enough ventilators and oxygen for everyone. Many die because they don’t get treatment. In October 2021, there were interruptions with ventilators and oxygen cylinders at Hospital No. 10 in Minsk. It happened on weekends when interns and young specialists remained in the department, who sometimes could not get a needle into a vein. 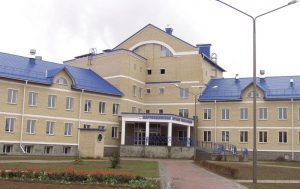 In the Sharkovshchina hospital, which was praised by the state propaganda back in 2019, now patients may not wait for help. Here they are treated to the last, delaying the transfer to the intensive care unit to such an extent that the patient, getting there, dies in a few hours. The diagnosis of “coronavirus” is made reluctantly, and doctors have to fake medical records. All this is done not only in order not to spoil statistics but also in order not to pay bonuses to staff for working with infected COVID-19.

But the worst thing is when there was little left before saving someone’s life. And because of the state of the health care system, and an almost healthy person dies. Such a story happened this year in Pruzhany. A resident wrote to a group on social networks that her husband needs a blood transfusion after surgery, but there are no supplies in the hospital and the whole area. The man died the next day. It’s funny that just a few days before, an eight-hour “Big Conversation with the president” took place, at which the illegitimate dictator praised the best Belarusian medicine in the world.

Lukashenka prefers to spend budget money on security forces and unprofitable enterprises. At that time, Belarusian citizens die in hospitals because they are not provided with qualified assistance. The graves of people who died from the coronavirus, from medical errors and missing surveys, are solely on the conscience of Lukashenka. Mass genocide of the Belarusian people is taking place in the centre of Europe right now – and we very much hope that the dictator will answer for it shortly.