According to article 46 of the Constitution of Belarus, every Belarusian has the right to a favourable environment. It means that Belarusians have the right to breathe fresh air and not to live near enterprises. However, the illegitimate state regularly violates this right – and Belarusians face this in almost every region. 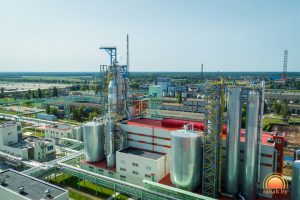 In 2017, Svetlogorsk was preparing to launch a Chinese corporation SAMSE plan based on Svetlogorsk pulp and cardboard plant. After the trial run of the plant, residents of the village of Yakimova Sloboda began complaining about the disgusting smell that made them sick and made their throats scratchy. After a flash mob on social media and meetings with the management, the Chinese specialists left, but in late summer 2018, the stench from the plant returned. It began to be felt not only by the villagers but also by residents of urban neighbourhoods. They describe a pungent, unpleasant odour comparable to the smell of rotten cabbage that comes from the plant. Specialists said this smell belongs to mercaptans. They affect the central nervous system, causing convulsions, paralysis, collapse and even death.

After a wave of outrage, Svetlogorsk authorities invited activists and journalists to the plant, but there were no excess mercaptan emissions that day. Yuri Kruk, General Director of the CCCC, stated that he has lived here since 1967 and did not smell anything. But the locals disagreed with him: they complained that the stench was getting stronger every day. “We have a stuffy throat from this smell. It is impossible to be outside. Do you know what the doctors tell us when we complain? “Go home, close all the vents and drink tea.” Just outside the fence of the plant, the Svetlogorsk vegetable factory grows crops. And all this goes to stores not only in the region but also to Minsk,” said residents of Svetlogorsk district. However, the authorities sought in every way to suppress the opposition, threatening the active women through their children and grandchildren. In November 2018, it became known that the bleached pulp plant closed, and the Chinese workers left it in its entirety. 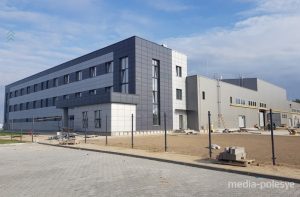 A battery factory in Brest got scheduled to be commissioned in 2019. Brest and several villages in the Brest district residents believed that the plant threatened their health. Tales from local officials, the Ministry of Nature and battery plant management about the 140 new jobs and the high level of wastewater and air purification didn’t satisfy them. Since February 2018, Sunday marches against the battery plant began in the city centre. One of the actions was the feeding of pigeons in the main square. Such walks became a tradition. The authorities responded by cracking down. Brest video blogger Sergey Petrukhin got fined 1225 rubles, and the court gave the same amount to his colleague, blogger Aliaksandr Kabanov. Aliaksandr Kabanov promised to go to the square if the plant construction is not stopped: “I will megaphone to tell people about the harm of the plant. They must stop the construction. And that such forms of protest will take place every Sunday.” 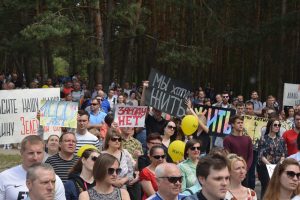 Since the summer of 2018, detentions at Sunday protests have become regular. But Brest residents went every week to feed pigeons in the city centre. People in other regions of the country supported them. In the end, in November 2018, it became known that the plant would undergo a second environmental impact assessment. Minister of Natural Resources and Environmental Protection Andrei Khudyk met with Brest residents. He said that the information about the harm of the battery plant, collected by activists, was largely false. The protests against the construction of the environmentally harmful plant continued. The law enforcers had to take drastic measures. They found “a suspicious package” while examining the car of the activist Moisey Mazko. It contained small calibre cartridges and an object that resembled an explosive. Police opened a criminal case against the protester for ammunition possession. And in June 2019, the chairman of the Brest Regional Executive Committee decided to suspend the construction “until the violations got eliminated.” KGB opened a criminal case against the company owner, Viktor Lemeshevsky. And despite this, in October 2019, it turned out that the plant was working.

And in 2020, Battery Alliance, a company co-owned by Dmitri Baskov, Nikolay Lukashenko’s trainer, bought the plant. Lukashenko soon promised to hold a referendum on the construction of the battery plant. But after the elections, it became known that there would be no referendum. And soon, the plant construction got resumed, and in March 2021, it started working. The opponents of the plant got under pressure again. It was first announced in July 2021. In September 2021, the criminal trial of Dmitry Androsyuk, an opponent of the construction of the battery plant, began. He got accused of refusing to testify in a criminal case against Brest blogger Sergey Petrukhin. And on December 2, 2021, activist Oleg Vialov was behind bars. 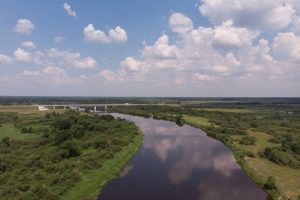 The problem of river pollution is no less acute. In 2019, it became known that the Svetlogorsk pulp mill discharges production wastes into the Berezina. It flows on the territory of Belarus and is the right tributary of the Dnieper River – 1/5 of the water into the river comes from the Berezina. A resident filmed the process of dumping waste into the river. In the video, black water with yellow foam flows into the pond. The liquid had a characteristic odour, felt by Svetlogorsk and Svetlogorsk district residents. Sergey Gorbachev, deputy general director for the ideology of the enterprise, said that it was a planned discharge, which “does not threaten the environment. But the waste in the river agitated Ukraine, through whose territory the Dnieper flows. Ukrainian experts took water samples from the Dnieper River in the transboundary area with Belarus. According to the tests, iron levels were 3.2 times higher and manganese 6.2 times higher. 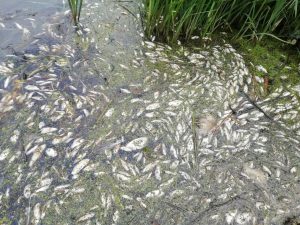 In July 2020, the Grodno Inspectorate for Natural Resources and Environmental Protection began looking for the person responsible for the unauthorized discharges of oil products into the Neman. A month before, local kids, playing on the river bank, saw a black oily liquid in the water, which was quite hard to wash off their skin. The discharge source was a storm drain, coming from an industrial area where state and private enterprises were. There was a lot of finely chopped plastic at the bottom of the reservoir. It caused a morass of fish in the Neman. It was impossible to establish which organization had made the unauthorized discharges. But the officials initiated administrative proceedings on the crime, and the inspectorate was preparing a claim for compensation for the damage caused to nature. Lithuanian ecologists started an independent investigation as well, as the Neman flows through the territory of Lithuania.

The rivers are polluted also because of the lack of rules of cattle disposal. Farms dupped animal corpses into ravines where they rot in the rain and snow, and water with a disgusting smell flows into the rivers. Such a problem arose in 2012 in the Tolochin district. Waste and animal corpses got into a gorge near the Sokolyanka River. Water with a disgusting smell flowed from the overflowing ravine – note that the Sokolyanka flows into the Adrov, the right tributary of the Dnieper. It means the problem goes beyond one area. Activists from “Our House” passed information about the threat of pollution to the head of the inspection of natural resources and environmental protection – review took place at the farm, which dumped waste into the ravine. 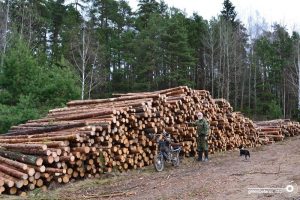 This year the illegitimate state decided to take the forests away from the Belarusians. Reports of massive deforestation appeared in Telegram channels in early summer. Ministry of Forestry said: all logging is planned, the wood is harvested mainly in the exploitable forests, designed for this purpose. However, the NGO “Bagna” stressed that logging in Belarus increased over the past few years. Volumes have increased after 2017. But the interesting fact is that this spring and summer, timber prices reached a historic high in the world market. This year, the cost of a thousand cubic meters of timber reached $1,670. In developed countries, people invested the money accumulated during the pandemic into construction, and the traditional timber suppliers couldn’t reach their previous capacities. There is almost no doubt that the illegitimate dictator decided to take advantage of the opportunity to make some extra money on timber and ordered the destruction of the Belarusian forest. 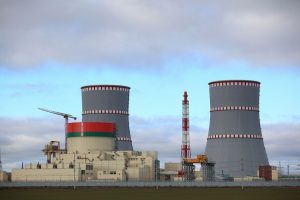 But the real environmental threat to Belarus is the BelNPP. On November 12, 2007, Lukashenka issued Decree No. 565, “On some measures for the nuclear power plant construction”. The document ordered to organize preparatory work for a nuclear power plant construction in Belarus. In 2008 officials decided on the plant location, and universities began to enrol students in nuclear power engineering. Belarus planned to invite Russia and European countries to the construction, and in 2009, “Rosatom” became the contractor to build the station. Two years later, scientists of Belarus and Russia prepared a project of the union program “NPP Waste”, and in 2012, work began on the nuclear power plant in Ostrovets construction. In 2014, the work moved to the aboveground stage. One year later, the BelNPP exposition was opened for the first time at the IAEA headquarters in Vienna during the 59th General Conference of the agency. In 2017 and 2018, BelNPP went through inspections by various organizations, and in November 2020, the first unit of the power plant got officially launched.

However, it was shut down as many as seven times during the year after the unit. And in February 2021, the European Parliament passed a resolution on the safety of the BelNPP, stating that the plant “began generating electricity on November 3, 2020, despite numerous remaining safety problems and without evidence of the extent to which the 2018 EU expert review and the International Atomic Energy Agency recommendations have been implemented.”

“The number and frequency of incidents raise serious concerns about poor quality assurance and control during the design and construction phases of the plant and its poor operational safety, which should be given due consideration in the EU peer review,” the European Parliament stressed.

Neighbouring countries of Belarus have never been confident in the safety of the nuclear power plant. And after the political crisis in the country, they refused to buy electricity produced in Belarus. Now nobody needs the Belarusian nuclear power plant costing $10 billion. The dictator can blackmail western neighbours with it, spitting on his people. And meanwhile, the start-up of BelNPP is postponed till 2022 – and we can still avoid the high costs of handling hazardous for thousands of years spent nuclear fuel and unacceptable ecological risks. Because right now, it is much more significant for the government to repress all dissenters and provide salaries to the law enforcement agencies than to care about the safety of Belarus and neighbouring countries. And the Belarusians’ fear before the launch of the nuclear power plant has not disappeared.

With Lukashenka, our country may lose fresh air, beautiful banks of clean water reservoirs, woods. Ecological problems also harm the Belarusian flora and fauna. Unique species of animals and plants may disappear forever. So far, there is no life for people, animals and plants in Belarus, but we believe that the situation will change soon.