While people around the world are thinking about how to preserve forests, and more and more trees are being planted, more and more pines and spruces are being exported from Belarus. Alarming news comes from Novogrudok, Ivye, Pruzhany, Volozhin, Stolbtsy, Baranovichi and other districts. Meanwhile, cutting down trees is not a novelty for Belarus – long before last year’s elections, residents of district centres fought to defend small squares, parks and forests. On the day “Plant something” we will tell how “Our House” is fighting for green Belarus.

In 2012, activists of the Civil Campaign “Our house” sent the Minsk authorities 2,000 signatures of residents of the capital demanding to reconstruct the Friendship of Peoples Park, on the site of which they were going to build a sports centre. The activists demanded to reconstruct the fountains, lay paths, put up benches, organize playgrounds and prepare places for walking dogs. In response to the appeal, the city administration announced that there was no money for reconstruction. However, in the end, they were not allowed to place the sports complex there.

In 2015, residents of houses on Victory Avenue in Gomel contacted “Our House”. In the courtyards in connection with the repair of the heating main, trees were cut down. In July of the same year, “Our House”, together with caring Gomel residents, went to the administration of the Zheleznodorozhny district for a conversation with the first deputy head of the administration. He convinced the activists that new trees would be planted instead of the cut down trees. 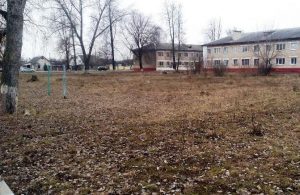 In the same year, residents of Slutsk faced the felling of trees. Housing and communal services cut down maples and birches to be destroyed, which were specially marked with paint. Everything happened in agreement with the Inspectorate of Natural Resources. More than 800 new saplings were planned to replace the trees that had been cut down. Volunteers from “Our House” decided to check whether all the territories were included in the Tree Planting Plan for 2015. The monitoring turned out to be effective – a large empty space was found near the house No. 63 on Vilenskaya Street, which requires improvement. With this question, the activists turned to housing and communal services.

In 2016, Olga Karach turned to the Prime Minister of Belarus Andrei Kobyakov with a request to provide information on the cities of Belarus, in which new parks have been built over the past five years with the involvement of sponsorship. After all, there is not enough budgetary funding for the improvement of parks and green areas. At that time, the improvement of the park in the Loshitsa micro district was just beginning – and no funds were allocated from the budget for this project. 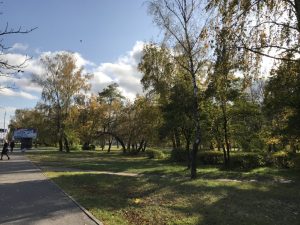 In 2017, activists of the ICCI “Our House” took part in the discussion of the general plan of the city of Bobruisk. Particularly interested in the issue of construction of “service centres for residential areas and neighbourhoods” in the sanitary protection zone. The activists identified three zones where new buildings may appear and which they would like to preserve, because next to them there are enterprises that release harmful substances into the atmosphere, from which trees perfectly protect. A statement on the inadmissibility of the disappearance of green zones separating enterprises from residential neighbourhoods was sent to the Department of Architecture and Urban Planning of the Bobruisk City Executive Committee. 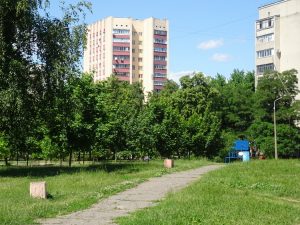 In 2017, “Our House” took up the issue of the square near the “Tourist” hotel in Gomel. The square is a favourite resting place of Gomel residents, but nevertheless, they decided to give it “for sealing construction”. The situation was aggravated by the fact that there were no playgrounds and sports grounds in the quarter. ICCI “Our House” proposed not to build a high-rise building, to keep adult trees intact, and to place a children’s playground and exercise equipment for people of different ages for physical education between them. Thus, to protect the park from destruction, to give it later the official status of a recreation area and come up with a name. The activists went to a meeting with the chairman of the Gomel City Executive Committee. Before that, a performance entitled ‘We Choose the Park’ was held. As a result, the authorities said: if the people are ready to independently engage in the improvement of the green zone, there will be no house here. At the end of 2017, the city executive committee announced that it was ready to put a hand in the improvement of the park by installing gazebos, benches and garbage cans there. 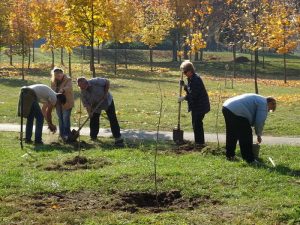 In 2018, the improvement of the park began: planting trees, installing a flower bed, cleaning paths. In addition, benches appeared in the park. It should be noted that activists of the ICCI “Our House” took part in planting trees – they managed to plant 95 trees and 16 shrubs in the park, put stakes and tie up 39 birches, 8 sumacs trees and 4 maples. Moreover, in 2019, about 10 “family” trees were planted in the park.

Meanwhile, the deforestation of forests and parks in the country does not stop. In July 2020, residents of the Putrishki agro-town of the Grodno region protested against the expansion of the cemetery and the cutting down of the oak grove. The villagers began to defend the array – to collect signatures, write to the local authorities. After all, the root system of trees protected the low-lying streets from flooding. After communicating with the housing and communal services and the administration, the felling work was suspended.

Residents of the village of Sloboda, Minsk region, faced the same problem last summer, who wanted to deprive the forest and make a quarry in its place. Without approval, trees were cut down near the capital station in order to create turning platforms for buses and parking spaces. However, as it turned out later, the felling work was not coordinated with either Minskzelenstroy or the district administration. 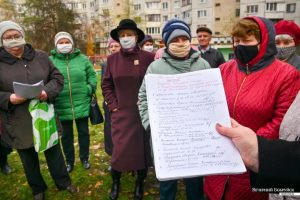 In November 2020, residents of Bobruisk came out to protest – they spoke out against the clearing of the park on Ulyanovskaya Street. Officials wanted to build a shopping centre here. After discussing the issue with the city authorities in 2019, they wanted to offer the entrepreneur another building site – but he did not agree, and in October, they took soil samples in the park. In 2020, the entrepreneur redesigned the project: he reduced the area intended for parking spaces, provided for the improvement of the adjacent territory. The project was approved, but the residents were not asked anything. 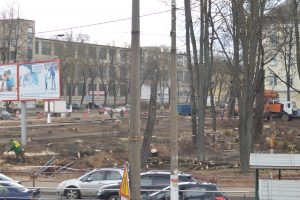 In the spring of this year, trees were cut down in Vitebsk along Gagarin Street to make a turning circle for trams. The authorities explained that the street needed to be widened, and many of the trees were in disrepair. Nevertheless, residents of the city regret the lost plantings. We can only hope that the city authorities will nevertheless plant trees and shrubs on the street: they will lay out flowerbeds, plant trees, shrubs and create a lawn.

We have already talked more than once about how the state treats security officials in a special way. So the Academy of the Ministry of Internal Affairs has now decided to expand – on April 6, a discussion was held with a presentation of a project for the construction of an educational building and a hostel in the city centre. The situation was aggravated by the fact that they plan to build buildings near residential buildings, one of which is of historical and cultural value, and trees will be cut down for them. Local residents are against: the Academy of the Ministry of Internal Affairs will take away a plot of the park from them and violate the already absent adjoining territory. The academy has nine dormitories on its balance sheet, and Minsk residents do not understand why one more is needed. 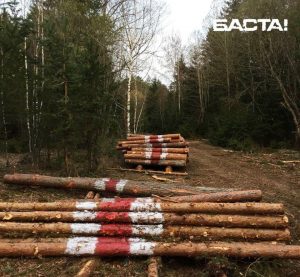 Finally, about deforestation. Now timber all over the world breaks records in price – for a year sawn timber has risen in price by more than 4 times. Prices are rising in both the US and Canada and China. Canada is slowing down the rate of deforestation because a bug damages large areas of it. Beijing stopped buying timber from Australia. Thus, Belarus, one of the ten leading forest states, according to the Ministry of Forestry, has a real chance to make money on forests, reducing the number of green spaces. More than 21 thousand cubic meters of lumber were put up for auction by the organization of the Ministry of Forestry. From May 19, timber auctions will be held daily, and it is planned to exhibit 2 thousand cubic meters each. Against the background of the fallen sectors of the economy, the forest looks like a saving thread – only the money will most likely be seen not by ordinary Belarusians, but by security officials, officials and propagandists.

ICCI “Our House” notes: forests and trees save us from carbon dioxide and harmful exhaust poisoning, taking part on ourselves. In addition, forest air is good for health – and where will the townspeople be able to go if deforestation does not stop, and if there are no squares or small parks left in the cities? We can prevent Belarus from transforming from a country of forests into a country of high-rise buildings and deserts. And each of us knows what is needed for this – Lukashenka’s departure.