The cultural platform became one of many non-governmental organizations that closed after the repression against NGOs began. It opened in Minsk in 2011 to popularize the Belarusian language and culture. At first, it worked at the «Horizon» trading house, where cultural events, lectures, seminars, festivals and concerts were held. Over the years, «Art Syadziba» has grown, began to hold Days of culture of the Belarusian language, participate in city holidays. In 2018, she organized a concert, «BNR100», due to Freedom Day, and it gathered thousands of people.

The first years of «Art Syadziba» work cannot be called easy. The organization got constantly evicted from rented premises. From 2011 to 2014, «Art Syadziba» changed five locations. Only after that, it move into her premises on Masherov Avenue, 18, where she worked until the summer of 2020. The money for the new premises was collected literally by the whole world — the Belarusian intelligentsia also joined in. For example, musician Dmitry Voityushkevich spoke in support. 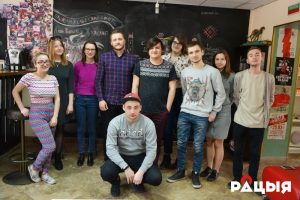 «Art Syadziba» has worked hard to popularize Belarusian literature and music. It united musicians banned from entering official venues. In 2013, thanks to «Art Syadziba», a film about Belarusian alternative music history appeared. The tape told about the history of the Belarusian-language alternative music movement from its inception to the present. In 2014, the staff held a competition, «Poets live in songs», for musicians. The musicians got invited to send a song in the Belarusian language based on the poems of Belarusian classics. Then «Art Syadziba» released these songs and held a concert presentation. At the same time, the organization was collecting signatures in support of a street in honour of Ryhor Baradulin, a national poet of Belarus, a candidate for the Nobel Prize, who died in March 2014. In 2015, thanks to «Art Syadziba», it was possible to create an audiobook of the poet Gennady Buravkin, who died in May 2014. In December 2015, it was possible to watch Svetlana Alexievich’s Nobel Lecture at «Art Syadziba». In 2016, the cultural platform sent its group to the Ukrainian show «X-factor». The team consisted of the ex-musicians of the band «Lyapis Trubetskoy». They took to the stage in T-shirts with the «Pahonia» coat of arms, and a white-red-white flag was flying in the hall. The performance impressed the judges, and the group was allowed into the next stage. 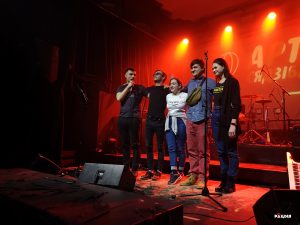 In 2015, with «Art Syadziba» support, an underground performance, «Branislay Tarashkevich. Sketches from life and dreams», was staged in Minsk. The play got created by director Eldar Bekirov, and it got dedicated to the life of the famous Belarusian linguist Bronislav Tarashkevich. It is noteworthy that non-professional actors, participants of student theatres performed the roles. In 2018, «Art Syadziba» held an evening in memory of Belarusian poet Larisa Geniyush. In 2019, «Art Syadziba» and the independent portal, «Euroradio», launched podcasts «Cultural Syadziba».

Every Monday, Belarusians communicated about art, history, Belarusian language and much more. Musician Nikita Naydenov, PR manager Sergey Andrianov, musician Ales Tabolich and others participated there. The podcasts discussed all the events of Belarusian culture: from the traditional Kupala to the Eurovision Song Contest.

Even during the coronavirus period, «Art Syadziba» did not leave Belarusians without music. The organization’s channels broadcast online concerts of bands: B:N, LEIBONIK, «Palats», «Addiction Loop», Akute, «Mutnaevoka», performers NAKA, LEAR, Fox and many other representatives of Belarusian musical culture. 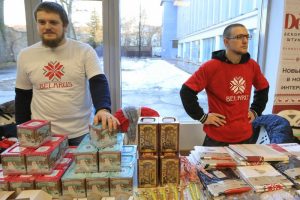 The interest of Belarusians in the traditional folk ornament and the Belarusian language began with «Art Syadziba». In 2014, the organization, with the support of the Belarusian Union of Artists, organized the «Ornament Day». The same festival was held in Grodno. Here, customers had the opportunity to purchase any products with elements of Belarusian ornament. The state liked this initiative so much that in 2016 the Belarusian Republican Youth Union decided to hold its own Ornament Day.

After that, «Art Syadziba» has repeatedly held events for the Day of the Native Language and historical dates. In 2015, the T-shirt with the Belarusian ornament «Art Syadziba» was presented to Robbie Williams. «We wanted Robbie Williams to feel that he had come not to another concert in another country, but Belarus,» said Pavel Belous, director of «Art Syadziba». There were also colouring pages for adults with the ornament, which the platform began releasing in 2016. At the same time, the organization opened its school, in which it wanted to transfer experience in conducting nationally oriented concerts and festivals to young and active Belarusians. 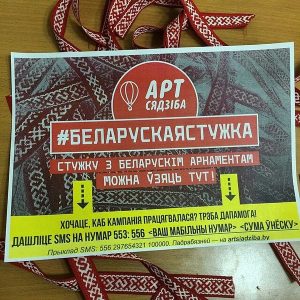 For several years, «Art Syadziba» has been holding the #belaruskastuzhka campaign. Volunteers handed out ribbons with ornaments before various events on the streets of Minsk. For example, in 2017, it was before «Dynamo Minsk» football club and AEK from Larnaca game. In 2018, the ornament appeared on the uniform of Belarusian football players. However, cooperation with the Belarusian Football Federation ended for Art Siadziba in early 2019.

«Art Syadziba» supported activists fined large sums or convicted. In 2016, the organization began collecting fines for young people who painted graffiti «Belarus should be Belarusian» and «The revolution of consciousness, it is already underway». They got sentenced to amounts from 30 to 50 basic units. In the summer of 2016, a solidarity rally with blogger Eduard Palchis was in the capital, at which activist Yevgeny Batura got detained. His car had white and red stickers and a protest flag. In his support, «Art Syadziba» held a campaign «RWR-auto», inviting those who wish to designate their autos with opposition flags. As a result, the car returned to the activist. 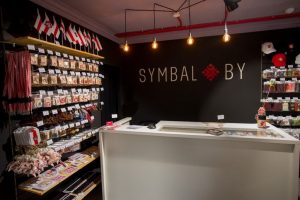 In 2020, pressure on the culture began. Store Symbal.by, opened by the founders of «Art Syadziba», began selling T-shirts with the inscription «PSYCHO3%». After that, the illegitimate government began to put pressure on it. The store’s courier had a print run of T-shirts with the inscription «PSYCHO3%», checks from the Ministry of Emergency Situations were frequent in the store, the light was constantly disappearing. As a result, the store stopped working but continued to sell products online. The cultural platform could no longer operate openly either, so there was almost no news about events and concerts after the elections on August 9, 2020. And on July 23, 2021, «Art Syadziba» appeared on the list of NGOs in liquidation status. 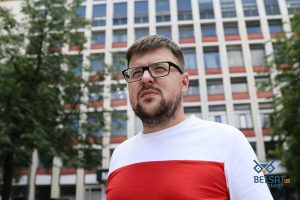 On November 15, 2021, Pavel Belous, the founder of «Art Syadziba» and Symbal.by store, got detained. First, he got sentenced three times for 15 days allegedly for illegal picketing and twice more for hooliganism. However, after these days, he was not released. Moreover, it became known that he got charged under article 342 of the Criminal Code for organizing or preparing actions that violate public order. On December 29, Pavel got recognized as a political prisoner, and he may spend in jail up to 4 years in prison.

On January 3, «Art Syadziba» announced the suspension of its activities. «Because we are in the process of liquidation, and the law on responsibility for the activities of liquidated organizations will be adopted soon, we decided not to continue. Thank you to everyone who has been with us all these years,» the organizers wrote.

We are sure that many Belarusians have warm events connected with this cultural platform. Someone learned here about high-quality music in the Belarusian language. Someone spoke Belarusian thanks to «Art Syadziba» efforts, somebody discovered Belarus as a country with a rich history and culture. We believe that after the end of the existence of the Lukashenka regime, «Art Syadziba» will return and will delight more than one generation of Belarusians.